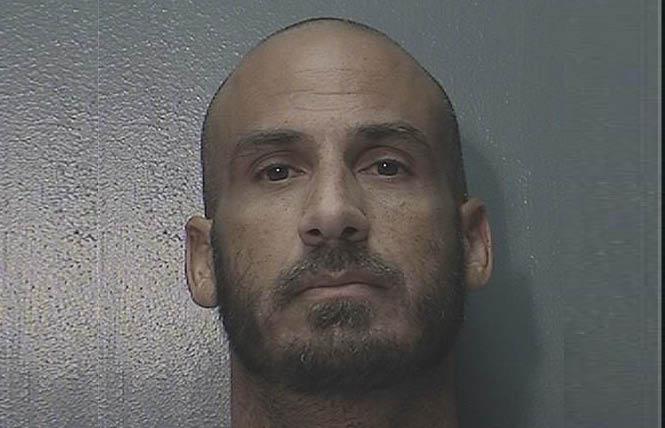 Michael William Magidson, the last of the four murderers of trans teen Gwen Araujo who is still in prison, was denied parole this week during a hearing at Valley State Prison in Chowchilla, California where he is being held, according to the California Department of Corrections and Rehabilitation.

Sylvia Guerrero, Araujo's mom, wrote in a text message to the Bay Area Reporter and friends and family that at the September 10 hearing, Magidson, 39, for the first time said he was sorry.

"He admitted to his part in her killing," Guerrero wrote. "He took all of the blame for her death. He also admitted that he strangled her and that he could have saved her life but didn't."

Araujo, 17, was killed in October 2002 at a house party in the East Bay city of Newark, California. Two men at the party had reportedly had sex with the young woman they'd known as Lida, and they murdered her after their suspicions that she was a trans woman were confirmed. The men then drove Araujo's body to a grave in the Sierra foothills.

Araujo's murder brought unprecedented attention to transgender issues and prompted a state law barring the use of the "panic defense," where people charged with murder defend themselves by claiming the victim's sexual orientation or gender identity triggered them.

In a subsequent text message to the B.A.R., Guerrero said she could not attend the hearing due to health issues. Her younger sister, Lupe Downing, attended on behalf of the family.

Downing said in a phone interview Friday that the parole hearing was stressful.

"As you can imagine, it was kind of mixed emotions. He's apparently just starting to scratch the surface of trying to turn his life around," she said.

"I was worried, but it turned out better than I thought," Downing added. "I was only four feet away from him, that was hard enough."

Downing, 48, said she has not forgiven Magidson for his role her niece's death.

"He didn't just kill her," she said. "It was disgusting what he did to her, over many hours."

Guerrero said Wednesday that she thinks Magidson only acknowledged his role in Araujo's murder "because if he didn't, he'd never get out."

"It wasn't sincere," she said in a phone interview.

"Denying Magidson parole was absolutely the right decision," Tiffany Woods, a trans advocate, wrote in an email Wednesday. "That he is finally taking responsibility for his part in the killing of Gwen as the 17th anniversary of her murder approaches speaks volumes and rings hollow.

"Only now admitting to killing her when he had the opportunity to save her life and he willfully chose to strangle her, his sudden onset of 'remorse' sounds more like a parole strategy," added Woods, who used work with trans clients in the East Bay. "Sylvia Guerrero and her family are still suffering the aftermath of Gwen's death and still need our support. Justice for Gwen is only served by Magidson remaining incarcerated indefinitely."

Woods held a fundraiser after the 2004 mistrial at the old Rainbow Room bar in Hayward called "Hear Our Voice" as a community response. (The men were convicted following a second trial in 2005.)

"All live trans musicians and I emceed," she wrote. "We raised over $1,000 for Horizons Foundation so Sylvia could speak in the schools."

According to Luis Patino, spokesman for the California Department of Corrections and Rehabilitation, Magidson is expected to have another hearing in five years. He was sentenced to 15 years to life with the possibility of parole in 2006 after being convicted of second-degree murder.

The September 10 hearing at which Magidson's parole was denied was the second time the hearing board took up his case. He was also denied parole in 2016.

The three other men who killed Araujo have all been released from prison.

Most recently, Jose Merel, 39, was granted parole in 2016. At the time, Guerrero said that she had spoken with the Merel family on and off for years and that Merel was always the most remorseful of the men. She also said that she wanted Magidson to remain incarcerated because he had never shown remorse or taken responsibility for his actions.

In the Wednesday phone interview, Guerrero said that she no longer stood by her comments about Merel.

Jason Cazares, 39, pleaded guilty to voluntary manslaughter and was discharged from prison in 2012.

Jaron Nabors, 36, pleaded guilty to manslaughter in exchange for his testimony and was sentenced in 2006 to 11 years in prison but was released early.

Guerrero remains homeless, three years after the B.A.R. reported that a crowdfunding campaign had been set up to help her. To donate to the GoFundMe, visit https://www.gofundme.com/mjcbpda6

Updated, 9/11/19: This article has been updated to include comments from Tiffany Woods.

Updated, 9/12/19: This article was updated to include comments from Sylvia Guerrero.

Updated, 9/13/19: This article was updated to include comments from Lupe Downing.