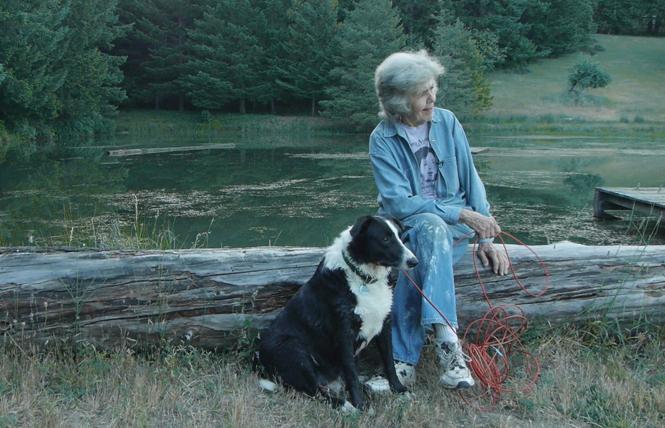 Sally Gearhart sits by a lake with her dog, Bodhi, in a scene from the film, "A Great Ride." Photo: Courtesy Deborah Craig

As she drives her beat up jeep with her dog, Bodhi, by her side through the Women's Land all-female community in Willits, California, Sally Gearhart reminisces about working side-by-side with the late gay San Francisco supervisor Harvey Milk to defeat a homophobic ballot measure in 1978.

"Harvey Milk and I did wonderful things together. We looked like mom and pop," says Gearhart, referring to their televised debate against the author of what was known as Proposition 6, the late state legislator John Briggs, who wanted to ban LGBT people from working in the state's public schools.

The scene is captured in Deborah Craig and Veronica Deliz's short documentary "A Great Ride," which features a number of senior lesbians living in various cities in Northern California. With the camera rolling, the relatively reclusive Gearhart discusses her fears about aging.

"I am scared to lose my ability to drive and my independence," says Gearhart, 88, the first out lesbian to receive a tenure-track position at San Francisco State University in 1973.

"I grieved over leaving Oakland to move here," says Crawford, who tells Craig that when she first arrived in Solano County she became less active in the LGBT community. "As lesbians get older, our fear gets greater. It takes my breath away how homophobic folks out here are." 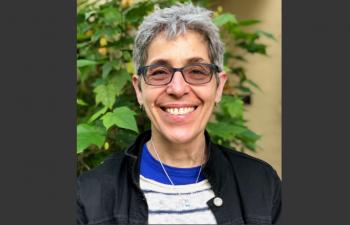 Craig, 60, a lesbian herself who teaches at SF State in the health education department, started work on the 31-minute film in 2014. It stemmed out of a federally funded study about lesbian health she was assisting with at the college, where she had earned a master's in public health.

"All the characters in the film I met working on that study," said Craig in a recent interview with the Bay Area Reporter. "Through this study I met so many cool women. I just thought they were fun, they are funny, they are encouraging, they are smart, and people will connect with them."

At the suggestion of a friend, Craig submitted a rough cut of the film to Frameline, the international LGBT film festival held annually in San Francisco during Pride Month. To her astonishment, it was selected and premiered in 2018.

"My first reaction was, 'Oh, fuck! Now we have to finish the film.' It really lit a fire," recalled Craig, who spliced together three vignettes of how older lesbians had chosen to live out their golden years, with the third focused on a group of lesbian residents of the Oakmont Village for seniors in Santa Rosa.

Since then it has screened at various film festivals and will be shown during this year's Legacy Film Festival on Aging taking place in San Francisco September 22-24. It is the first time it will be featured at a film festival focused on senior issues.

The film has also received renewed attention within the local LGBT community, with the Alice B. Toklas LGBT Democratic Club screening it this month for its members and the organizers of the Howard Grayson LGBT Elder Life Conference, taking place Saturday, September 14, building a panel discussion about senior lesbians around the film.

It comes as Craig works to complete a full-length documentary solely about Gearhart, whose admirers have long contended was overshadowed later in life by the legacy of Milk, who made history in 1977 by becoming the first out gay person to be elected to public office in San Francisco and California only to be killed in November 1978, 11 months into his first term as supervisor and just weeks after celebrating the defeat of Prop 6.

For years now Gearhart has declined media interviews, and as the B.A.R. reported in May, her friends had launched a crowdfunding effort to cover the cost to care for her. A colleague from the lesbian health study at SF State who is friends with Gearhart first introduced Craig to the academic and author of lesbian fantasy novels in the 1970s and 1980s.

"She has this whole arc to her story that is really kind of ... hopefully we can make a great American story of transformation. She was this small town Southern girl and becomes a character and leader and icon," said Craig. "A lot of people, women especially, felt she hasn't gotten her due. She was written out of the 'Milk' film. I try not to pass judgment, but that is what happened."

Through the website https://www.documentaries.org/sally, which includes a six-minute teaser for the film "Sally," Craig is seeking donations to complete the film and hire a comics artist to animate segments for it. She expects it will run 70 to 90 minutes and hopes to release it in 2021.

"I am trying to give her some of the credit she is due," said Craig. "She is a hidden figure in a way."

For ticket information for the Legacy Film Festival on Aging, visit its website at http://www.legacyfilmfestivalonaging.org