Editorial: Milestone marked, but more to do 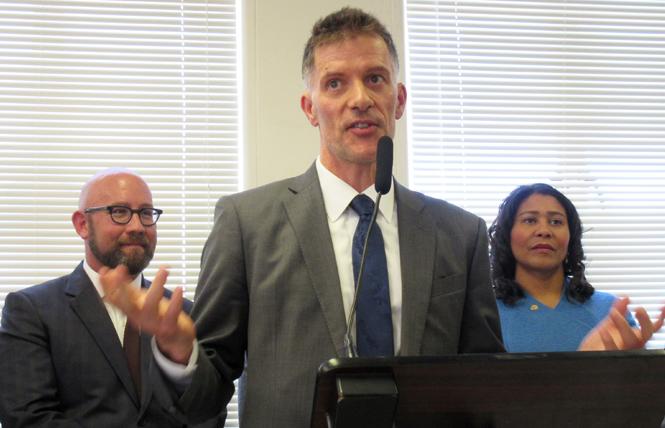 The news Tuesday that San Francisco had fewer than 200 new HIV infections in 2018 was greeted with the praise it deserves. As an epicenter of the epidemic since its beginnings in the 1980s, San Francisco has shown the world how to fight HIV/AIDS through a combination of public and private support that became the "San Francisco model."

"The results of the annual HIV report are encouraging and show that we are on our way to Getting to Zero," Mayor London Breed said in a news release. "That said, we know that some San Franciscans need additional care and outreach in order to receive the treatment they need. Our health care professionals and community partners will continue working to reduce disparities among populations and improve HIV care for everyone in our city."

Dr. Grant Colfax, a gay man who became San Francisco's health director earlier this year, deserves credit for his past work in the city that contributed to this week's news. As the city's HIV prevention director years ago, he instigated sweeping changes to the city's response to the epidemic. He was an early advocate for a number of policies once viewed as controversial, such as rapid HIV testing and treatment on demand in order to lower patients' HIV viral loads, making them less likely to transmit the virus. As we reported earlier this year, those prevention approaches are now pillars of San Francisco's Getting to Zero strategy, which aims to reduce the number of new HIV cases by 90 percent by 2020. Colfax was also an early supporter of another component of the strategy, providing PrEP, the once-a-day pill that has proved effective at keeping people HIV-negative when taken as prescribed. He did so at a time when many questioned its merits as an HIV prevention tool.

And yet, the HIV numbers show that stubborn disparities remain, particularly among black and Latino men. Black men had the highest diagnosis rate, at 145 per 100,000 people, even though they make up only 6% of the city's population. Also, as we report, for the first time, there were more new diagnoses among Latinos, who make up 15% of the city's population, than among whites, who are around 53% of the population.

San Francisco HIV/AIDS service organizations are stepping up to address the racial and economic disparities. On Monday, the day before the city's announcement, the San Francisco AIDS Foundation released its new five-year strategic plan. It now prominently states that it strives for justice, including diversity, equity, and inclusion of communities most impacted by HIV, in its programs and across all levels of the organization. "We are committed to recognizing, interrupting, and addressing oppression," the plan states. One of its four strategic priorities calls for strengthening organizational excellence "with a focus on living our values, including a commitment to racial justice." SFAF noted it has worked on these issues "to some degree" for many years but will now "deepen this work substantially." One of the key goals is to create more safe and culturally appropriate spaces for people of color to receive the services they need at any of SFAF's locations. Another is recruiting more people of color as employees and promoting them to the highest levels of leadership; while also working to retain staff of color by creating a racially just workplace.

"It will be an ongoing process and will not be complete in five years," the plan states. "However, we are confident that substantial progress can be made." To that end, the agency has a five-year target that people living with HIV will have equal rates of viral suppression regardless of race and ethnicity.

SFAF realizes that the face of the epidemic has changed. The new plan states that it prioritizes people living with HIV; gay, bi, and queer men, trans and gender-nonconforming people; and those who inject drugs. Within those communities, SFAF further prioritizes people of color, people experiencing homelessness and unstable housing, people over age 50, people who use substances, and people with mental health care needs.

This new plan is a good move for the largest HIV/AIDS agency in the city. By focusing on justice, SFAF, long viewed as an agency for gay white men, will attempt to address the changing realities of the epidemic.

The success of SFAF, and other HIV/AIDS service organizations, in combatting disparities among black, Latino, and homeless individuals will reduce the numbers of new HIV cases in San Francisco. There needs to be a commitment — financial and otherwise — among all HIV/AIDS service providers to eliminate these disparities.