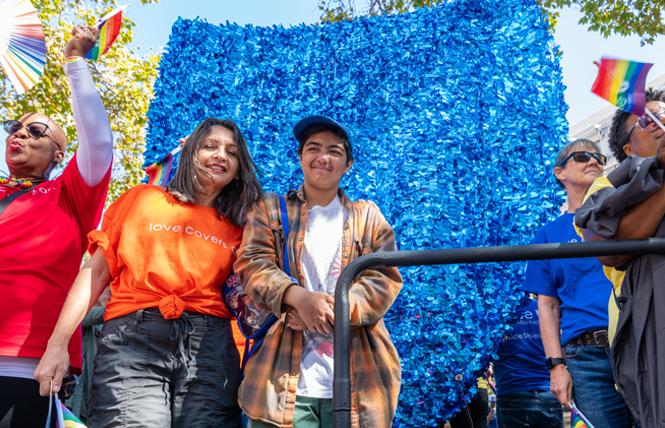 LGBT employee resource groups have come a long way since their early days — it is believed that the first such ERG was formed in 1978 by workers at Hewlett Packard. By the end of the 1980s employees of numerous large corporate firms had established their own LGBT-focused ERGs.

In the beginning they were focused on improving visibility for LGBT people in the workforce, making it easier for them to come out on the job and not be fired for doing so. A key initial goal was securing the same benefits packages for same-sex couples as those provided to employees in heterosexual marriages.

Four decades later, LGBT ERGs have succeeded not only in improving workforce conditions for their members and co-workers but are increasingly addressing issues beyond the office walls. Their leaders were instrumental in pushing their companies to support the legislative and legal fights of the last two decades for marriage equality.

During the same time they became an increasing presence at annual Pride parades across the country. The public show of support by American corporations for the LGBT community has been hailed by some but bemoaned by others upset at the corporatization of the LGBT events.

More recently, LGBT ERGs and their companies have begun to address the needs of transgender and nonbinary employees. They have pushed for policies to improve working conditions, from designating all-gender restrooms at workplaces and adding trans health benefits to employee's insurance offerings to taking a stand against transphobic state and federal laws.

That in turn has drawn the attention of straight employees whose children are coming out to them about their gender identity and looking for resources and support. They are seeking out the LGBT ERGs not only for assistance but also to become members.

"The first thing is, absolutely, it is something we are seeing. More and more ERGs are increasingly active outside of the office walls," said Isabel Porras, who is queer and is the director of learning and development at Out and Equal Workplace Advocates, which focuses on LGBT issues in business settings.

One such arena LGBT ERGs are straddling between work and home, said Porras, is providing support to parents with transgender, gender-nonconforming, or nonbinary children. It can be as simple as having a one-on-one discussion explaining the right terminology and pronoun uses, she said, to more in-depth undertakings such as working with parent ERGs to co-host panels and workshops covering a wide range of issues transgender people face.

At its own conferences and events Out and Equal has addressed such topics, said Porras, who joined the nonprofit nearly four years ago.

"Personally, I see this a lot when I facilitate trainings around gender and queer inclusion in the workplace," she said. "A lot of times people have questions not about their colleagues but their families, their children, or their children's friends. So they bring that conversation into the workplace as well."

Oakland resident Angelica Matsuno turned to Blue Shield Pride, the company's LGBT ERG, for support after her son, Rei Matsuno, 17, came out to the family as being transgender. Even though she had an inkling Rei wanted to transition from the gender he was assigned at birth, when he talked to his parents about it last August it still came as a shock, she said.

"I wasn't all the way prepared," said Angelica Matsuno. "It's a big change. Everything turns upside down for a second."

Coming out to his family "was pretty difficult," said Rei Matsuno, now a senior in high school. "I was really nervous about what would happen afterward. In the end, my parents and family were super supportive and accepting as well as my community around me. I am so thankful for that because I know other people don't have that same experience."

Angelica Matsuno, 56, a senior program manager of provider education for close to six years at the insurance company, had taken part in events put on by the LGBT ERG at work over the years. After Rei came out to the family, she became more involved and joined as a member last December.

"It has been really incredible, the support from Blue Shield," she said. "The case manager who handles all members going through transgender medical procedures, he reached out to me personally to talk about anything. I thought that was so amazing, people reaching out to me. I don't have to take the first step, because it can be hard, especially sharing with people you don't know your story."

Blue Shield Pride Co-Chair Chris Huber, 51, a gay man who works out of the company's El Dorado Hills office in Northern California, said the ERG had started a series called Out Talks where any employee at any office site could listen in and hear their LGBT co-workers tell their own stories.

"It opened the doors for a lot of people who didn't have an affiliation or contact with anyone in the LGBT community to put a face or name to a personal, relatable story," said Huber, a senior manager in the company's New Enrollment Individual & Family Plans Business Unit. "Then we saw more allies coming out to support us."

He said much of what the Pride group addresses overlaps with employees' professional and personal lives.

"A lot of what we do is very public. We represent Blue Shield in Pride parades," said Huber, noting the company had a float in last Sunday's Oakland Pride parade. "We do a lot of outward facing stuff."

The support can run the gamut from helping someone come out of the closet to their family and friends to connecting them with community resources. Huber has fielded questions from co-workers looking to find a gay doctor to someone newly diagnosed with HIV and looking for additional resources.

"The Pride group does not do a lot of programming," he said. "It does a lot of providing resources."

Through a webinar the Pride group hosted, Angelica Matsuno connected with another woman at Blue Shield who had a transgender daughter who had recently come out. Leaders of the Pride group, which has a budget to work with, had offered to send the women and their families this summer to a camp designed for trans children and their parents.

That didn't work out, so they instead attended a two-day conference hosted by the nonprofit Gender Spectrum at a college in Moraga. Not only did the two families learn about various resources available to them, they also made personal connections.

"It was awesome to be in an environment where everyone around me had something in common," said Rei Matsuno. "It is not something very comfortable to talk about it. I made a lot of amazing connections with other people."

For Angelica Matsuno, the gathering helped put her mind at ease about her son's day-to-day experiences and focus on other issues he is facing, such as choosing colleges to apply to.

"I was able to let go a little bit. All of our conversations don't have to be about this; let's talk about college now," she said. "It helped me get back to a place where all was right and I could take a breath. Things are getting back to normal now in our house."

It also benefited her work life as well, she said, as she could concentrate better knowing that her company was supportive of her and her family's needs.

"I am more productive at work and able to focus on my job," she said. "I would say treating your employees with respect and giving them a voice is one of the most important things a company can do. An ERG, especially Blue Shield Pride, really does that."

Not only does she feel very loyal to Blue Shield, Angelica Matsuno said she feels "very fortunate they have my back. I don't think a lot of people can say that about their workplace."

Rei Matsuno said he has also benefited from knowing his mom's employer is supportive and accepting of him.

"It gives me a lot of support for the future knowing there are people out there who will support people who have specialized situations," he said.

Newsom signs LGBT contracting bill
Governor Gavin Newsom has signed into law Senate Bill 534, one of two bills sent to him this year aimed at helping LGBT-owned businesses. SB 534, introduced by state Senator Steven Bradford (D-Gardena), requires the state's $310 billion insurance industry to biennially report how much it is contracting with businesses owned by women, people of color, veterans, and LGBT individuals as well as the demographic makeup of their boards of directors.

Gay Insurance Commissioner Ricardo Lara, a former state senator, co-sponsored the legislation. It revives the state agency's Insurance Diversity Initiative that expired in January and expands its scope to include LGBT- and veteran-owned businesses.

"It is time for the insurance industry to reflect the great diversity of California and the United States. SB 534 makes that possible," stated Bradford.

Lara added that insurers in the state "should be using their enormous buying power to invest in California's minority, woman, LGBT, veteran, and disabled veteran owned businesses as well as work towards achieving a governing board that reflects the diverse population in California."

Another bill backed by the Oakland-based nonprofit that would boost LGBT and other minority owned businesses is now awaiting Newsom's pen to become law. Assembly Bill 962, co-authored by Assemblywoman Autumn Burke (D-Inglewood) and Assemblyman Rob Bonta (D-Oakland), would require California hospitals to publicly disclose how much they are contracting with LGBT-owned businesses as well as those owned by women, minorities, and other disadvantaged groups.