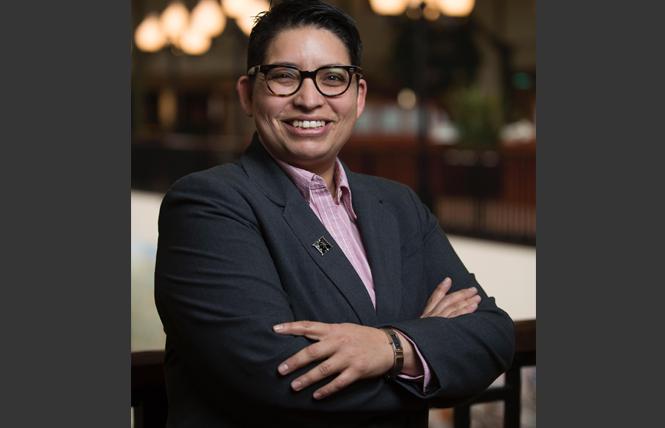 Maria Cadenas, a lesbian single mother and nonprofit leader, has entered the 2020 race to succeed state Senator Bill Monning (D-Carmel), who is termed out of his 17th Senate District seat along the Central Coast.

The Santa Cruz resident is the second out Democrat to seek the open seat, as gay former Assemblyman John Laird (D-Santa Cruz) has spent the last eight months campaigning to return to the state Legislature. He has locked up early endorsements from area LGBT political groups and Equality California, the statewide LGBT advocacy organization, as well as scores of elected leaders in the Senate district, which includes Santa Cruz and San Luis Obispo counties, the coastal areas of Monterey County, and southern Santa Clara County.

In an interview with the Bay Area Reporter this week, Cadenas said she isn't running against Laird, per se, but to give voters a choice next year.

Laird, 69, is well known throughout the district, having been elected as the first out city councilman of Santa Cruz in the 1980s and serving several stints as the liberal coastal town's mayor. After losing a 2010 Senate bid, Laird served as former Governor Jerry Brown's secretary for natural resources until stepping down this January when Gavin Newsom became governor.

"I am feeling very well positioned in the race," Laird told the B.A.R. this week. "I am feeling confident of my campaign to date but I am taking nothing for granted."

Two Republicans have also pulled papers for the race: Vicki Nohrden, who ran unsuccessfully for an Assembly seat last year, and Neil G. Kitchens, who also lost an Assembly bid last year and is now facing five felony charges of voter fraud for allegedly lying about living in the district he was seeking to represent. He pleaded not guilty in June.

The deadline to qualify for the race is in early December, and the top two vote-getters in the March 3 primary will advance to the general election next November. If Republican voters coalesce around one candidate in the primary, then the GOPer will likely face off in the fall against one of the Democrats, widely expected to be Laird. Yet, they will be given little chance of winning the race in the heavily Democratic district.

"It would be my hope it is me against a Republican," Laird told the B.A.R. this week.

Cadenas is hoping her personal story will resonate with voters and give her an edge in the Senate contest. Born in Mexico City, she grew up in Southern California and left for Wisconsin to attend Beloit College. After graduating she went to work for Accenture and shortly after the 9/11 terrorist attack was hired as the associate director of the American Civil Liberties Union of Wisconsin.

She later was named executive director of the Cream City Foundation in Milwaukee where she worked on a number of LGBT initiatives and issues. Hired by berry distributer Driscoll's as its senior community involvement manager brought her back to California in 2011.

She settled in Santa Cruz, where she continues to live with her 10-year-old daughter; Cadenas is separated from her daughter's other mother and the former partners now share custody. In 2015 she was hired by Community Ventures, which focuses on income inequality among women and people of color.

This is Cadenas' first bid for public office.

"My commitment is to my community, my neighbors, my co-workers. It is not about confidence, it is about caring," said Cadenas when asked if she was confident she could win the race. "It is about making sure our families and workers have a strong representative and one with a lived experience of what we are facing here in the Central Coast and in the Senate district."

Having addressed rural issues, particularly those faced by farmworkers, and having worked in both the corporate and nonprofit worlds has given her the experience she needs to serve in the state Legislature, argued Cadenas.

"I care tremendously about where we are going as a region, state, and country. My career has centered around service and advocacy," she said. "At this moment in time I am honored and humbled to offer that experience and care as a future senator."

Top issues she wants to address in Sacramento would be health care, climate change, and housing. It was her daughter's concerns about the future of the planet, she said, that prompted her to seek elected office.

"She asked me if we could limit our use of plastics in order to save the Earth. She is 10 years old," said Cadenas. "No 10-year-old should have to worry about saving the world."

There are now six out non-incumbents known to be seeking state legislative seats in 2020, one of whom is already serving in the Legislature and is running to succeed a termed out LGBT caucus member. Another four out incumbents are seeking re-election next year.

Queer woman expected to seek CA Congress seat
San Diego could see two out leaders running for Congress in 2020, as queer City Council President Georgette Gomez is expected to announce her candidacy this Saturday for the 53rd Congressional District seat. Congresswoman Susan Davis (D-San Diego) announced last week that she would not run for re-election next year.

Gomez became the first queer Latina to win election to the council in 2016 and had been gearing up to run for re-election next year. She is expected to announce her candidacy this Saturday for the 53rd Congressional District seat.

If she does enter the race, Gomez would be the second LGBT congressional candidate in the San Diego area. Last month, Republican gay former San Diego councilman and failed mayoral candidate Carl DeMaio entered the 2020 race for the California House seat held by disgraced Congressman Duncan Hunter (R), who is battling charges he misused campaign cash for affairs with several women.

SF planning director to retire
Earlier this year, ahead of his being honored by EQCA in May for his leadership of San Francisco's planning department the last 11 years, John Rahaim had told the B.A.R. that he had no plans to leave his job anytime soon. Now, his time overseeing a massive building boom in the city is coming to an end.

Rahaim, a gay man who lives in the city's Mission district, and Mayor London Breed announced September 4 that he will retire once his replacement is found.

"My time serving as San Francisco's director of planning has been the greatest honor of my career," stated Rahaim, 64, the longest serving out mayoral appointee overseeing a city agency. "I am grateful to have led this exceptional department through the growth and change that San Francisco has experienced over the past decade and continues to see today."

Rahaim's tenure has spanned across four mayoral administrations and coincided with numerous zoning and development battles, largely driven by the influx of tech workers. He also helped push through rezoning plans of large swaths of the city, including in South of Market and the Mission.

"John oversaw the department and city through unprecedented times of recession and growth," stated Breed. "Under his leadership the Planning Department delivered area plans which allowed for new levels of public benefits and much needed housing in transit rich neighborhoods. John will continue to serve the city through this time of transition as we begin the search for new leadership. We thank John for his service to the city of San Francisco and its residents and for being a true public servant."

Re-appointed to serve by Breed were Arts Commissioner Paul Woolford, Commission on the Environment member Mike Sullivan, Rent Board alternate Commissioner Reese Aaron Isbell, and War Memorial Board of Trustees member Thomas E. Horn, the emeritus publisher of the B.A.R.

Breed also sworn in gay City College of San Francisco board president Alex Randolph as a new commissioner on the Workforce Investment San Francisco Board.