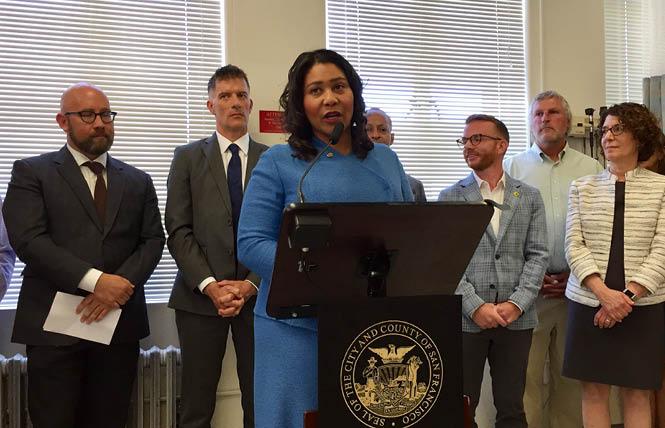 The San Francisco Department of Public Health released its latest HIV epidemiology report Tuesday, showing that new HIV diagnoses have fallen below 200 a year for the first time, putting San Francisco on track to achieve its goal of becoming the first city in the United States to get to zero new infections.

Most indicators of HIV care have improved as well, and more than 90% of newly diagnosed people are now being linked to care within a month and starting antiretroviral treatment promptly, which reduces disease progression and lowers the risk of transmitting the virus.

But some notable disparities remain, including rising HIV rates among African American and Latino men and a high rate of new infections and low rate of viral suppression among homeless people.

"We in San Francisco have been at the forefront of pushing for innovative new policies, new science, and new technologies to get us to this milestone," Breed said. "We're showing real progress that we should all be so proud of, but we know that disparities still exist."

"Dropping under 200 new infections reminds me of 20 years ago when the Bay Area Reporter had its 'No obits' issue. Now we're trying to get to the next step of no [HIV/AIDS] deaths and no new infections," said gay District 8 supervisor Rafael Mandelman. "We will not get to zero until we really get a handle on getting care to people who are out on the streets and who are living with so many challenges."

As has historically been the case in San Francisco, most newly diagnosed people are men (88%) and nearly two-thirds are gay or bisexual.

While white and Asian/Pacific Islander men saw a continued decline in new HIV cases, the number of new diagnoses rose slightly among African American and Latino men between 2017 and 2018. HIV incidence rates for these four groups were 27, 11, 145 and 89 per 100,000, respectively.

Although black men had the highest diagnosis rate, Latinos make up a larger proportion of the city's population — approximately 15% (Latino) versus 6% (black) — according to the U.S. census. For the first time, there were more new diagnoses among Latinos than among whites (who make up around 53% of the population).

Cisgender (non-trans) women accounted for 9% of new diagnoses in 2018. Although HIV rates are high among transgender women and men, they make up a small proportion of the total population and therefore account for just 3% and 1%, respectively, of new diagnoses. No infants or children under 13 have been diagnosed with HIV in San Francisco since 2005, according to the report.

Thanks to improvements in treatment, HIV-positive people are living longer and the HIV population continues to shift into older age groups. In 2018, 67% of people living with HIV in San Francisco were over age 50, including 30% who were over 60. People over 50 accounted for 13% of new diagnoses, according to the report.

In 2018, there were a total of 15,990 people known to be living with HIV in San Francisco. This number has changed little over the past five years. Despite adding around 200 to 250 new cases per year during that period, the number of deaths among HIV-positive people has slightly outpaced new infections since 2016. In addition, people with HIV continue to be displaced from the city due to rising costs and lack of affordable housing.

"I started here as a medical student at Ward 5A in 1992 and have seen the progress we've made," he said. "That legacy teaches us that it takes a collective vision and a collective effort. That's the homegrown model for what we did with HIV, and it will also be the model for how we address what may seem like intractable health problems today."

Access to care
San Francisco is a leader among U.S. cities when it comes to providing timely access to HIV care and treatment. In 2018, an estimated 94% of people living with HIV had been tested and knew their status. Among newly diagnosed people overall, 91% were linked to care within a month and 78% achieved viral suppression within a year.

Looking at all people living with HIV — both diagnosed and undiagnosed — DPH experts estimate that 76% have received care and 70% maintained viral suppression in 2017. Because people with undetectable viral load do not transmit the virus, a higher proportion of individuals with viral suppression contribute to a lower risk of infection on a community level.

These promising findings mask some important disparities. African American and Latino people have lower levels of viral suppression compared with whites (68%, 70%, and 74%, respectively). Cisgender women and trans women had lower rates of viral control (66% and 68%, respectively) than men. Among people who inject drugs, this rate stood at 65%. The most dramatic disparity was the low rate of viral suppression among homeless people: only 33% had an undetectable viral load.

The latest findings show that San Francisco is making progress toward achieving the goals of its Getting to Zero initiative: zero new infections, zero deaths due to HIV/AIDS, and zero stigma against people living with HIV.

Speaking on behalf of the Getting to Zero Consortium, co-chair Dr. Diane Havlir, chief of HIV/AIDS at SFGH, said, "We are pleased, but not satisfied."

"We are pleased that we broke the 200 barrier. In San Francisco over the last five years, new HIV diagnoses have gone down by 50%, while in the United States it's been completely flat," she continued. "But we are not satisfied because we had nearly 200 new infections and it's a preventable disease. We're not satisfied because of these disparities. We have to double down on these gaps we're seeing."

Experts said that reaching the remaining underserved groups will require tailored efforts to increase PrEP use, expand harm reduction services such as syringe distribution — and ideally, supervised injection spaces — and develop strategies to enable more people, especially those struggling with mental health issues, substance use, and homelessness, to access care and stay on effective HIV treatment.

"We need to focus on reaching people where they are — there are no hard-to-reach populations, but rather hard-to-deliver services," said DPH's Dr. Hyman Scott, a clinician at Ward 86. "We're excited about new efforts to address these social determinants of health that have been driving these disparities and preventing us from closing the gaps. If any city in the country can do it, we can do it here in San Francisco."

On Monday, as the Bay Area Reporter noted in an online story, the San Francisco AIDS Foundation released its new five-year strategic plan that puts a new focus on some of these issues. The plan outlines four strategic priorities including prevention and treatment of HIV, hepatitis C, and other sexually transmitted infections, especially among people of color; harm reduction for people who use drugs; services for HIV-positive people over 50; and a commitment to racial justice.