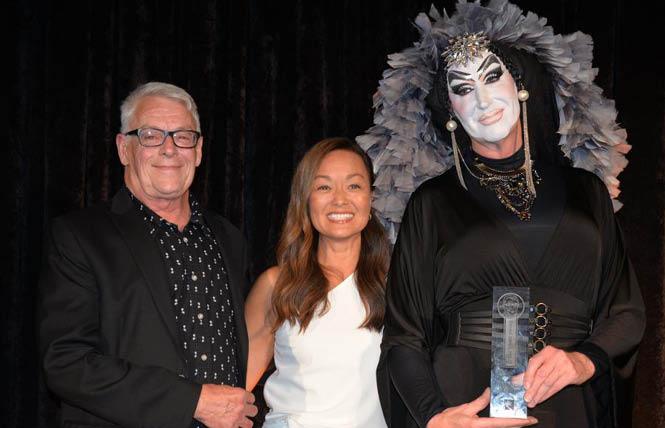 The San Francisco AIDS Foundation has released a five-year strategic plan that includes a new mission statement for the long-lived organization, reflecting its focus on the population groups most heavily impacted by the HIV epidemic today.

The new plan outlines four strategic priorities including prevention and treatment of HIV, hepatitis C, and other sexually transmitted infections, especially among people of color; harm reduction for people who use drugs; services for HIV-positive people over 50; and a commitment to racial justice.

"Progress over the last 37 years has been substantial but our work is far from complete," SFAF CEO Joe Hollendoner told the Bay Area Reporter. "During the process of building this strategic plan, we heard from community members what we know to be true about the public health system: There are health disparities that persist, inequities that have not been addressed, and trauma that has been ignored. That has to change if we want to ensure everyone can have a high-quality, healthy life regardless of their race, gender, HIV status, or economic situation."

SFAF was founded in 1982 as the Kaposi's Sarcoma Research and Education Foundation, the year after the Centers for Disease Control and Prevention published a report about an outbreak of rare pneumonia among gay men in Los Angeles. It was the first report about a disease that would go on to claim the lives of more than 21,000 people in San Francisco, nearly 700,000 in the United States and an estimated 32 million worldwide.

"San Francisco AIDS Foundation envisions a future where health justice is achieved for all people living with or at risk for HIV," according to an accompanying vision statement. "Ultimately, we strive for a day when: race is not a barrier to health and wellness; substance use is not stigmatized; HIV status does not determine quality of life; and HIV transmission is eliminated."

SFAF's efforts have contributed to a steady decline in new HIV infections. The agency runs one of the first needle exchange programs established in the United States and its Magnet sexual health service was among the earliest proponents of PrEP. Each year more than 25,000 people rely on the organization's programs and services, not counting the many more who find information and advocacy tools on SFAF's website.

The strategic planning process, which began in 2018, sought input and feedback from people living with HIV, SFAF staff members, funders and other partners, community members and other stakeholders, the agency said.

The plan organizes the SFAF's aims into four broad strategic priorities. The first focuses on maintaining and expanding HIV, hepatitis C, and STI prevention, treatment, and other sexual health services to ensure equitable access for people of color. African American and Latino people have the highest rates of new infections both in San Francisco and nationwide, and are less likely to be receiving effective treatment. One plan target is for people living with HIV to have equal rates of viral suppression regardless of race or ethnicity.

The organization also commits to maintaining and expanding substance use services for people who use drugs, including syringe access and overdose prevention efforts. A second target calls for 10,000 fewer overdose deaths over the next five years.

In collaboration with the Harm Reduction Coalition's Drug Overdose Prevention Education (DOPE) Project, SFAF has been instrumental in widespread distribution of naloxone, or Narcan, to reverse overdoses. The agency is also part of a citywide collaboration that is attempting to open the first supervised injection site in the U.S., in the face of growing federal opposition.

In addition, SFAF aims to create a comprehensive network of health and wellness services for HIV-positive people over age 50, who now account for two-thirds of all people living with HIV in San Francisco. A third target is that 50% fewer long-term survivors will experience isolation, poor physical health, or unmet mental health needs.

Another target is that fewer than 100 people in San Francisco will acquire HIV in 2024. The number of new infections stood at 221 in 2017 and could dip below 200 in the new 2018 HIV epidemiology report to be released Tuesday.

The final target aims to have 90% fewer HIV-positive people living with hepatitis C thanks to increased awareness, testing, and treatment. New antiviral therapies can cure almost all people with hepatitis C virus in two or three months, but experts estimate that a majority of people with HCV are not aware of their status.

Health justice
Central to all these targets is health justice, which the agency defines as the attainment of health equity, actualized when structural factors no longer determine health outcomes.

"Health justice is reached when all people possess the economic, social, and political power and resources to make decisions about their bodies and health — regardless of identities and experiences," according to a SFAF press statement.

"The social and economic issues that we face as a community and as a broader country really limit, and in many cases prohibit, access to all the necessary care that we need," said Mary Cha-Caswell, chair of SFAF's board of directors. "Health justice is about achieving more than health equity. It is ensuring that everyone has access and the resources — economically, socially, politically — to achieve a high-quality, healthy life regardless of HIV status, race, gender or economic status."

The full SFAF strategic plan is available online at http://www.sfaf.org/strategic-plan