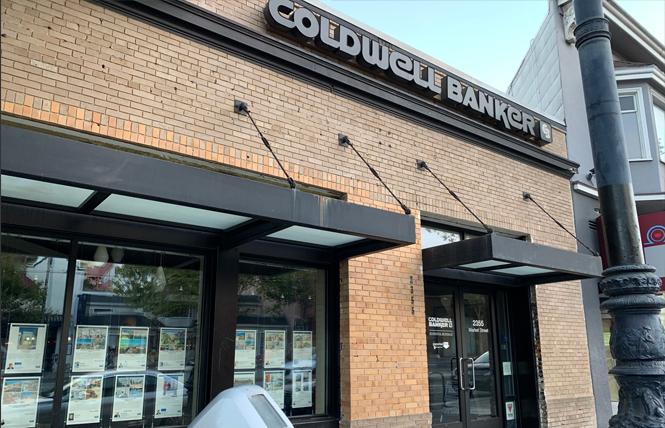 When the double storefront at 2355 Market Street (at Castro) goes dark Monday, September 9, the Castro will add another closed business to its long list of companies who left the neighborhood.

According to office manager Doug Devine, the Coldwell Banker Castro office, which has been at Market and Castro for the past 14 years, will consolidate with the company office on Van Ness Avenue.

In a phone call with the Bay Area Reporter Wednesday, Devine said he did not have any details about the upcoming vacancy.

Sitting just east of the real estate company is another empty storefront, the former Bisou Bistronomy, which closed in 2018.

In other Castro business news, Sterling Bank is planning to move next door from its current location into expanded quarters at 2100 Market Street, at the corner of Church and 14th Streets. The item will come up Thursday when members of the Castro Merchants group are scheduled to vote on whether to support the proposal.

Finally, after just four months in business, Cook Shoppe, the new restaurant that took over the space at 215 Church where Chow was located for 22 years, has closed its doors.

The restaurant, owned in part by a group of New York investors who also planned to open two additional restaurants across the street from the eatery, ran into trouble almost immediately after several people complained to the state that the establishment was serving alcohol without a license. California Alcoholic Beverage Control launched an investigation and told the restaurant it had to stop serving alcohol until it was licensed to do so.

Last month, in an interview with the B.A.R., a man who identified himself as Mark White, who said he was an owner of Cook Shoppe, said that ABC had made a "clerical error" on their application. White, who identified himself as a gay man, told the B.A.R. that his attorneys were working on the case to make sure the paperwork was filled out properly.

But on August 30, Hoodline reported that the restaurant abruptly closed, posting a sign on the front door thanking patrons for their support. The same day, Cook Shoppe withdrew its application for a license to serve alcohol, according to Justin Gebb, agent in charge of the San Francisco office of ABC.

The B.A.R. left several messages for White, which were not returned at press time. The future of the properties — a brasserie and wine bar (216 Church Street), take-out cafe Gramercy Park To-Go (212 Church Street), and Cook Shoppe — is uncertain.