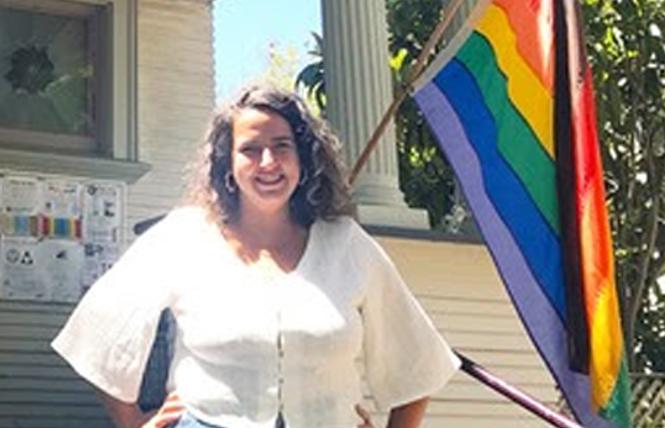 The new executive director at the Pacific Center for Human Growth is just one of a few queer women of color in a leadership role at a Bay Area nonprofit.

Michelle Gonzalez, 27, took the reins of the Berkeley LGBTQ community center — the oldest in the Bay Area and third oldest in the nation — August 1. She spent most of July in a transition period with Leslie Ewing, the former executive director who retired.

"I feel strongly that this is a disservice to the community," she wrote in an email to the Bay Area Reporter. "I am honored to be leading a Bay Area LGBTQ nonprofit and look forward to partnering with other organizations, as well as the broader community, to shift how we operate and who we center in our work."

She added that the perspective she brings to the job as a queer Cuban American woman "is important, and I'm also privileged by being cisgender, white passing, and able-bodied."

"LGBTQ nonprofit organizations must do better to center and uplift the voices of all who are marginalized in our community and I am committed to doing that in my new position," she added.

Gonzalez lives in Berkeley and previously worked at Joyable, an online site that creates curriculum for employee mental health and does therapy matching. Prior to that, she worked at Our Space, a program of Side by Side, which works with queer and trans youth in Hayward. There, Gonzalez started as a youth specialist, working directly with clients, before moving to a program director position.

One thing Gonzalez wants to do at the Pacific Center is make its clinical services more accessible. Currently, the center works with about 24 clinicians who provide therapy and counseling to young people and adults. Licensed clinicians who are members or allies of the LGBTQ community supervise these clinicians.

She also expects the center will continue to hold the annual Transgender Day of Remembrance in November. The Pacific Center started holding the event a couple of years ago after it left its longtime venue at Oakland City Hall.

The Pacific Center sees over 3,000 people per year, and helps another 1,000 through training programs and off-site connections. For example, this weekend the center will have a booth at Oakland Pride to promote its services.

Vera Hannush, president of the Pacific Center's board, said board members were impressed with Gonzalez.

"What stood out about Michelle was her passion, experience, and commitment to the Pacific Center's mission and vision," Hannush wrote in an email. "She is already identifying creative and forward-thinking ways to ensure that we remain Alameda County's preferred LGBTQ+ mental health provider and serve the maximum number of clients."

Hannush added that some of the board's goals for the next few months are "to continue to support the center's key focus on diversity, equity, and inclusion; to strategize with respect to corporate giving and growing the endowment fund; to grow our board; and to continue to be great ambassadors for the center's amazing work."

Gonzalez graduated in 2012 from Bard College at Simon's Rock in Massachusetts with a bachelor's degree in gender studies. She moved to the Bay Area five years ago.

Hannush wrote that the board declined to state Gonzalez's salary. According to the agency's 2016 IRS Form 990, Ewing's salary was $96,812.

So far, Gonzalez said, the job has been great.

"I'm trying to get a sense of the organization and having conversations with folks," she said. "I want to identify opportunities for the organization to improve, serve more clients more deeply, and be inclusive and accessible to everyone."

For more information about the Pacific Center, visit http://www.pacificcenter.org.