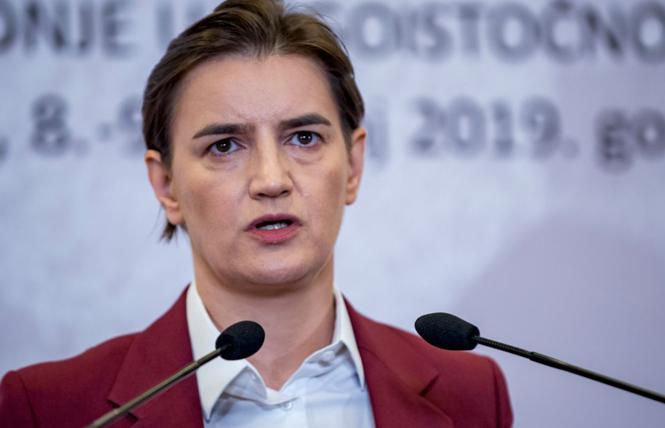 Serbian officials have blocked future access to same-sex couples forming families in the country after its first lesbian prime minister and her partner became parents earlier this year.

The birth of their son in February made PM Ana Brnabic the first gay world leader to become a parent while in office.

LGBT Serbians applauded Brnabic and her partner, Milica Djurdjic, who had the baby, viewing their family as a sign of hope. That was until a month later, when Health Minister Zlatibor Loncar banned all family planning for same-sex couples and people with a history of being in a gay relationship in the last five years.

Loncar put the kibosh on donations of reproductive cells used for artificial insemination in Serbia, in vitro fertilization, and even laboratory tests for same-sex couples.

Same-sex couples adopting is banned in Serbia. However, regardless of an individual's sexual orientation, single people can adopt in the Balkan country.

Now Serbian same-sex couples have to do what Brnabic and Djurdjic reportedly did, go abroad to create their families. If a same-sex couple in Serbia decides to seek medical treatment abroad to have children, the state doesn't recognize them both as parents, Radio Free Europe/Radio Liberty reported.

Only the biological mother has legal rights in such cases.

Some Serbian LGBT organizations have responded by filing complaints and calling for the ministry to amend or annul the policy, alleging it a violation of the law.

"This bylaw violates the Law on the Prohibition of Discrimination as well as the Constitution of the Republic of Serbia," Dragoslava Barzut, executive director of the Belgrade-based LGBT rights group De Se Zna, told RFE/RL.

He said that it isn't in line with other laws.

The ministry, Brnabic, and other government agencies have remained silent on the issue.

Overall, Brnabic has been limited on taking action toward LGBT rights in Serbia, but she's also done little to defend gay rights since she was elected as prime minister by Serbian lawmakers in 2017. She is a close ally of Serbian President Aleksandar Vucic.

Serbia hasn't won any points in international human rights circles for challenging LGBT rights as it attempts to join the European Union.

Brankica Jankovic, Serbia's commissioner for the protection of equality, is currently reviewing the law to provide a legal opinion regarding the groups' complaints of discrimination and whether they have merit.

The bylaw didn't have to go through a public opinion process before being passed and signed into law by the health minister.

If Jankovic declares her opinion in favor of LGBT rights advocates, the ministry will have 30 days from the decision to withdraw or amend the policy. Additionally, under Serbian law, the ministry could be forced to make a public apology to the LGBT community.

SMUG files appeal to register its name
Ugandan LGBT activists are pushing forward with a case against the African country's government, accusing it of violating their right to freedom and assembly and association.

The Uganda Registration Services Bureau has refused to legally register Sexual Minorities Uganda, which is an umbrella organization of Uganda's LGBT organizations.

According to reports, at an August 23 meeting with litigants and LGBT community members and allies in Kampala, Justine Balya, an officer with Human Rights Awareness and Promotion Forum, told them, "The judge believes registering SMUG is immoral."

She also noted that it was "highly uncommon" for a court to "award costs in public interest litigation," she said.

The court dismissed the activists' application on June 27, 2018. The activists filed an appeal in September 2018, making five claims.

The activists believe the court erred in its judgment, misconstruing the Constitution of Uganda and law. They argue in the appeal that SMUG's work isn't unlawful and the ruling goes against Uganda's constitution in a number of contradictory and unlawful ways, including awarding costs to the respondent.