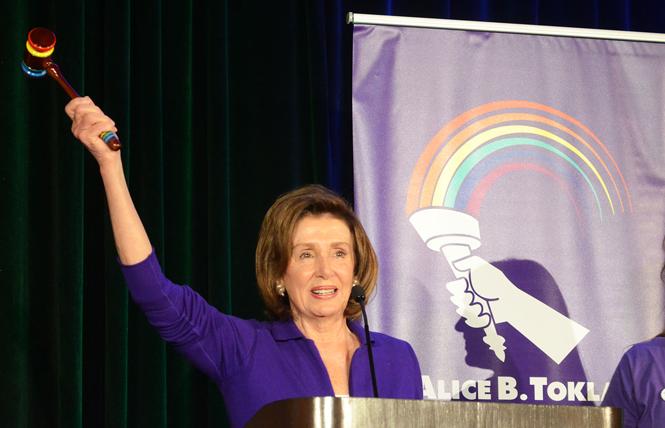 House Speaker Nancy Pelosi wants her name taken off a Lifetime Achievement Award given by the Shanti Project as this year's honoree is Dede Wilsey, a philanthropist who this summer hosted a re-election fundraiser for President Donald Trump.

Shanti, which suffered last year when its fall gala was canceled due to the hotel workers' strike and fundraising was moved online, is now under fire from agency clients over its decision to honor Wilsey.

Pelosi's (D-San Francisco) office told the Bay Area Reporter Wednesday that the speaker wanted her name removed from the award because it could "cast a partisan and political shadow on an occasion meant to celebrate Shanti's compassionate care in our community and the recipient's generous support of their work."

Kaushik Roy, Shanti's executive director, told the B.A.R. that Pelosi, who is in town this week to attend the Democratic National Committee meeting and other events, cannot attend this year's gala. She asked Shanti Tuesday to just call the recognition a "lifetime achievement award" without her name attached, which Roy said the agency will honor.

Wilsey, who has been a generous donor to Shanti and its Pets Are Wonderful Support program, is slated to receive the award at the nonprofit's Compassion is Universal gala in October. She received an award from PAWS at its 2016 fundraiser.

An August 3 email invitation from Shanti still had the award named for Pelosi above Wilsey's photo, as did its website as of Wednesday morning.

Some people reacted to the announcement with the sentiment that Shanti, which provides practical support and other services to people living with HIV/AIDS and other illnesses, is out of step by recognizing someone who fundraised for Trump's re-election. The president and his administration have struck blows against health care coverage for millions of Americans and devised rules for providers to allow refusal of care for LGBTQ people due to their religious beliefs.

"I've been a Shanti client since 2008, taking their classes for HIV-positive men to learn to care for ourselves," Strom told the B.A.R. in a phone interview. "And it's just baffling."

Strom, 58, is a gay man who has been living with HIV since 1995. He said he received the emailed invitation to the gala and knew he would not attend because of the $250 cost of the ticket.

"But I wouldn't have gone anyway, even if I could afford it," he added, citing the Wilsey honor. "It's just very contradictory."

"I know it's an executive decision," Strom said, trying to understand how this choice came about. "I know nonprofits have to fundraise. But it's a prestigious honor named for a Democrat like Ms. Pelosi being given to someone who hosts dinners for the opposition. Shanti should be ashamed."

Wilsey co-hosted a cocktail reception and fundraiser for Trump in July, though the president himself did not attend. According to SFist, the major draw for donors was the opportunity to rub elbows with the president's eldest son, Donald Trump Jr., and his girlfriend, Kimberly Guilfoyle, a former TV host, attorney, and ex-wife of California Governor Gavin Newsom.

Roy told the B.A.R. that Wilsey is Shanti's third lifetime achievement award recipient and was chosen for her "long-term impact on the SF nonprofit universe."

Asked about the irony of bestowing an award based on Pelosi's legacy to a Republican donor, Roy was thoughtful.

"Wilsey is one of Shanti's most long-standing generous benefactors," he said in a phone interview. "And Shanti's not the only organization that can say that. We consider her a very appropriate choice. I appreciate the emotional responses people have had to this news, but it's important to say it's not about how I, or anyone, feels about this president."

Roy did not hold back his own feelings about Trump.

"I think the president has done irreparable damage to this country," he said. "I think he is the greatest domestic threat to this country since the Civil War. But this isn't about that. It's about what a community-based nonprofit does when there are people in the community who feel that we should not honor someone once we've learned about their political support."

Roy also rejected the idea of banishing anyone from the community for their beliefs.

"This organization has never had any kind of litmus test, political or otherwise, for anyone: clients, volunteers, or staff. This president is hell-bent on creating an us-versus-them world, and our model is an antidote to that," Roy said. "To disengage from anyone for their political leanings supports the creation of that world. If this country is ever to heal, we must get closer to one another and not further apart."

First awarded to Pelosi herself in 2012 on the occasion of her 25th year in Congress, Shanti has also given the award to gay former U.S. ambassador James C. Hormel and gay former state senator Mark Leno. 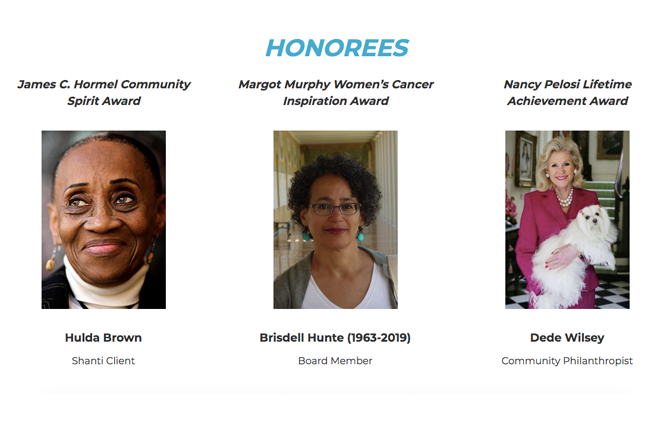 A well-known donor to Bay Area causes and an heiress to the Dow Chemical fortune, Wilsey recently stepped down from her 21-year position as the president of the San Francisco Fine Arts Museums board. She is now listed as "chair emerita."

The FAMSF board did not return a request for comment. Melissa Powers, manager of board relations, said members were unlikely to respond to something that wasn't "board-specific business."

The San Francisco socialite's known political contributions do not include any donations to the Trump campaign, according to OpenSecrets.org. Wilsey's last listed amount was a gift of $2,500 to the 2012 Senate campaign for Republican Charlie Summers, former Maine secretary of state. Summers ultimately lost his bid for a Senate seat to former Governor Angus King (I-Maine). Before that, Wilsey contributed to the 2000 Senate campaign of former Republican Congressman Tom Campbell, who was badly defeated that year by Senator Dianne Feinstein (D-California).

The B.A.R. is a media sponsor for the Shanti gala.

Publisher Michael Yamashita commented on the controversy via email, writing, "For many years, the Bay Area Reporter has been supportive of Shanti's critical work in the fight against HIV/AIDS on behalf of the LGBT community so we're happy to be a media sponsor."

Yamashita said the paper had no role in selecting the gala's honorees.

"I can understand that people may have good reasons to object even if that person is a generous benefactor," he wrote. "However, I'd prefer to focus on the benefits to those in need that Shanti continues to provide and not see it punished for accepting necessary funds from any donor willing to support the cause."

Others being honored at Shanti's gala include client Hulda Brown, who will receive the James C. Hormel Community Spirit Award, and Brisdell Hunte, a former board member who will be posthumously recognized with the Margot Murphy Women's Cancer Inspiration Award.