Back to School: At City College, gay men helm the board 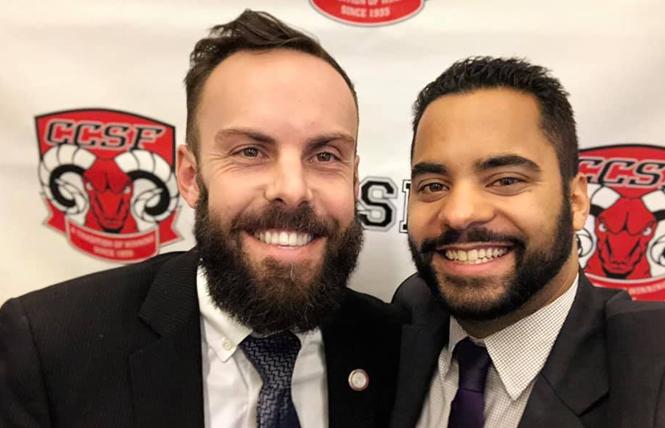 Earlier this year Randolph, 36, became president of the San Francisco City College Board of Trustees, while Temprano, 33, became vice president of the governing body. It is believed to mark the first time that the two leadership positions have been jointly held by gay trustees as well as by two millennials. (Shanell Williams, a bisexual woman, also serves on the board.)

Ahead of the start of the fall semester, which began August 17, the Bay Area Reporter sat down with Randolph and Temprano to talk about the challenges they have faced leading the community college board, from addressing multimillion-dollar budget deficits and hiring a new college chancellor to implementing a free tuition program for full-time students paid for by the city.

"For me personally, I'm excited to be here, because it's not been an easy year at City College, definitely, to take the presidency," said Randolph, a former City Hall aide who now works for Uber handling policy and public affairs. "We have a lot of challenges that we still need to address and are addressing. But I think we've made a lot of good progress toward achieving the goals the board has set."

Added Temprano, a legislative aide to gay District 8 Supervisor Rafael Mandelman, "I think we have done a good job in challenging circumstances in righting the ship at a really critical institution for San Francisco."

Both trustees joined the board — Randolph was appointed to a vacant seat in 2015 and a year later won election to a four-year term, as did Temprano — amid the institution's fight to maintain its accreditation and stay open. While the college secured a seven-year renewal of its accreditation in 2017, the controversy led to a significant drop in its enrollment that it is still trying to recoup.

A decade ago, City College's head count numbered 90,000. Last year, it had 67,638 full- and part-time students enrolled. The college now has close to 23,000 full-time equivalent students and is aiming to increase that number back to 32,000.

The board has had to grapple with declining revenues in recent years and faced closing an estimated $32 million budget deficit this year. It has led to class cuts and inducements for staff to retire in order to save costs.

When it meets Thursday, August 22, the college board is set to adopt its first balanced budget in 10 years. It has set a budget of roughly $165 million for the 2019-2020 fiscal year.

"This board has made it very clear that the days of deficit spending at City College are done," said Temprano, who acknowledged that the reduction in staff and courses offered "is a pain that is being felt across the college."

But he argued that the plan the board has put in place is also a "fair" one that prioritized the needs of students and ensures they can graduate within two years.

"We are trying to minimize the impact of these cuts on students, and are trying to, you know, prioritize courses that have high student enrollment and are courses that lead to completion of degrees and certificates," said Temprano.

The governing body Thursday is also expected to finalize the agreement with the city of San Francisco to cover the cost of providing free tuition to full-time students. The Free City Program will provide the college with $15 million this fiscal year from the city's general fund and a backfill payment of $5.2 million.

Cementing a long-term deal with the city to ensure the funding for the program would be there each year was a top priority for Randolph as board president. It was vital for the college's students, he said, so they had assurances their tuition would be paid.

"That amount of money they were getting through the program was key to their being able to remain at the college and having sort of hanging over the program this, this uncertainty, I think, made a lot of our students anxious. And so this provides security for the college," said Randolph.

The infusion of cash from the city will increase in subsequent years to at least $16.4 million. Students who also qualify for the California College Promise Grant will receive grants from the Free City Program equal to $46 for each enrolled credit unit.

"It is targeted toward first-time community college students," explained Randolph.
While the college did see a bump in enrollment when the free city college first began, it has since flatlined.

"We saw modest growth last semester, which is counter to the trends across the state that are seeing community college enrollment decline sharply. And this year's budget is actually based on flat enrollment growth," said Temprano. "If we are able to stay flat, we will be among the leaders in the state in terms of enrollment and not declining."

With extremely low unemployment rates in San Francisco, people can easily find jobs rather than seeking new degrees, the trustees pointed out.

"San Francisco is at, what, a 1.9% unemployment rate. And whenever the economy is going well, and people have jobs, there's no reason for them to go back to school, get new training, or take classes," said Randolph.

According to the state Employment Development Department, the unemployment rate for San Francisco County was 2.4% in July.

One way to boost enrollment is to gear the degrees and certificates City College offers to today's economy and workforce. A prime need is training workers to enter the state's marijuana industry, especially now that recreational use is legal.

Both Temprano and Randolph have been supportive of seeing the college offer a cannabis degree that anyone could take online. The hope is it will become available sometime in 2020.

"That will be one of the first in the country," noted Temprano.

Offering a cannabis certificate, added Randolph, "is another example where we know that there's a lot of jobs in this emerging sector in the state that a lot of people, honestly, don't have the skills right now to participate in." 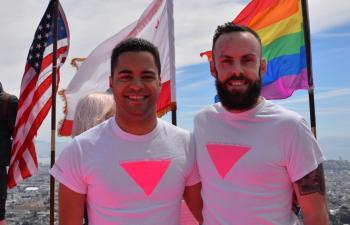 LGBT concerns
Amid the cost cutting, the college has been able to address a number of LGBT concerns on campus. It is set to open this semester a new Queer Resource Center at the main Ocean Campus that will be staffed year-round. In the past a faculty member had overseen the center, meaning it had limited hours during the semester and was shut during the summer months.

"It's exciting that, you know, in this coming school year, you're going to have new, good facilities for the Queer Resource Center and are going to have a full-time classified staff member who staffs it so that there is this year-round access," noted Temprano.

This semester the college is offering for the first time an Associate of Arts in Social Justice Studies: Feminist, Queer, and Trans Studies for Transfer. The two-year degree is a joint program between the Women's and Gender Studies and the LGBT Studies departments.

"It's the first in the state of California," said Temprano of the degree.

A number of queer studies classes are now being offered as online courses as well, so anyone in the country can enroll in them, noted Randolph. And this week the college announced it is moving to ensure there are gender-neutral bathrooms at all of its campuses and facilities.

"While CCSF will continue to have binary men's and women's restrooms, the addition of all-gender restrooms will increase inclusivity, accessibility, and awareness across campuses. Currently, 15% of CCSF restrooms are all-gender," wrote Rueben Smith, Ph.D., the college's senior vice chancellor for facilities, planning, and public safety, in an email to the college community August 19.

Temporary and permanent signage has been posted on select pre-existing binary restrooms to be designated as all-gender, noted Smith. He expects that permanent signage will be affixed across all campuses by the end of the fall semester.

Bond in 2020
A top priority for Randolph and Temprano, who is set to become board president next year, is passage of a $850 million bond on the March 3 primary ballot that will go toward upgrading City College's buildings at its various campuses around town. The college board in September is expected to approve placing the bond on the 2020 primary ballot.

It will need more than 55 percent of the vote in order to pass, and college officials are confident that voters will support it. The last time they sought the public's support for a bond was in 2005, when Proposition A passed and provided city college with $246.3 million for capital needs.

The college hopes to break ground on a number of projects in coming years so they can be complete by 2025 when it marks its 90th anniversary. It has an estimated $1.6 billion in infrastructure needs, so another bond measure will likely be put up for a vote on a future ballot.

"What a lot of people don't realize is that we are, you know, an 84-year-old institution. And a lot of our buildings haven't been touched or upgraded since the 1950s or 1960s," said Randolph.

Both trustees told the B.A.R. that they plan to seek re-election in the fall of 2020 to another four-year term.

Added Randolph, "We're going to be passing one of the largest bonds in City College history next year. So I think I would like to see a lot of the projects that I started with my colleagues come to fruition, and that will require me to serve on the board for another four years."