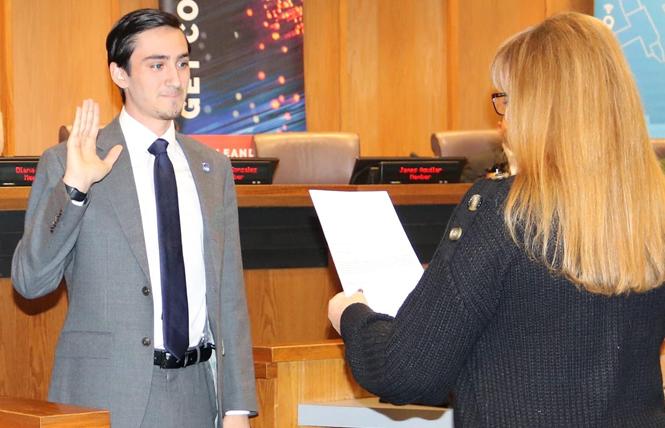 He has served less than a year on the San Leandro Unified School District Board of Education yet James Aguilar already has his sights on running for higher office.

The gay 19-year-old has pulled papers to run for a state Assembly seat should it become open in 2022. If elected, Aguilar could become the first LGBT state legislator from the East Bay, as well as the youngest out member of the Legislature.

In a recent interview with the Bay Area Reporter, Aguilar explained his reasoning for signaling his future political ambitions so soon after becoming a public official. In December, Aguilar joined the governing body for the school district after being appointed to his Area 6 seat last year since no one else filed to run for it.

"I filed now because someone like me takes two to three years to mentally prepare, to network with people, to raise money, and to get my name out there," said Aguilar, a sophomore this fall at SF State where he is studying political science and education. "I am young. I am only a school board member. I am just getting started in the political arena."

The likelihood is that Aguilar will have to wait until 2024 to seek a legislative seat. Currently, San Leandro falls within the boundaries of the 18th Assembly District, held by Assemblyman Rob Bonta (D-Oakland). The city's continued inclusion in the district will depend on the results of the 2020 census, which will determine legislative boundaries.

Aguilar doesn't expect the district boundaries for the Assembly seat to change much, if at all, due to the new census figures. As for Bonta, whom Aguilar interned for over the summer, he is not termed out of his Assembly seat until 2024.

At the moment, Bonta is focused on seeking re-election in 2020. Should he run in 2022 for a final two-year term in the Assembly then Aguilar would seek re-election to his school board seat that November and wait until Bonta leaves office to run to succeed him.

Aguilar is a product of the Assembly district, having grown up and attended public elementary and middle schools in Oakland. Six years ago his family relocated to San Leandro in search of better housing, he said.

But he ended up attending high school in San Lorenzo, since it was closer to his home and that school district also serves a portion of San Leandro. Aguilar went on to become student body president of his high school and served as the student representative on the board for the San Lorenzo Unified School District.

Due to his duties as a San Leandro school board member, Aguilar must reside at home and can't live on campus at SF State. He has arranged his class schedule around his school board meetings and commutes to the college Mondays, Wednesdays, and Fridays.

"Being on the school board legally binds me to San Leandro. I wish I had my own place," said Aguilar, who shares a one-bedroom apartment with his parents, older brother, and 7-year-old niece.

His interest in serving in the Legislature mirrors why he sought his school board seat, said Aguilar, to fix what he considers to be California's broken public education system.

"We are the fifth largest economy in the world and we are among the top 10 states in America when it comes to per capita prison spending. And we are the 41st state in per pupil spending for public schools. That is ridiculous," he said. "Our school districts don't have the resources to fully fund special education or revitalize their facilities."

In addition to being a voice for school issues in the state Legislature, Aguilar said he would push measures to address California's high housing costs, which impact teachers across the state, and climate change.

"I love my state. I want to be part of the change for future generations," he said.

Since joining the school board Aguilar has pushed the district to be more inclusive with the terminology it uses. He successfully advocated that its Latino Achievement Night be called Latino/Latina Achievement Night and plans to continue to push for it to use Latinx.

"I want to make sure our students feel welcome and they don't feel necessarily disenfranchised," said Aguilar, who self describes as Latinx.

He would also like his school district to follow Berkeley's lead in doing away with gender-specific terminology altogether. At its August 6 meeting the school board asked the staff to include the idea in its deliberations over a new strategic plan it will be adopting.

"At the very least I got discussion about it," said Aguilar, who has begun talking to the district superintendent about instituting such a policy.

San Leandro Unified was one of the districts that did not take part in the school report card on LGBT issues that Equality California released for the first time this year. The deadline for it to do so was prior to Aguilar's joining the board, and he told the B.A.R. he will work to ensure it takes part in the next one.

"I wouldn't see any problem with us participating in the future," said Aguilar, noting that the San Leandro district was the first to have a contingent in the annual San Francisco Pride parade.

Pride officials told the B.A.R. that their records show that the San Leandro Unified School District's first parade contingent was in 2011. They also said that the first official education contingent was in 2008 when the United Educators of San Francisco union marched, followed by a group of independent schools in the Bay Area and the San Mateo Community College District.

Aguilar marched in this year's parade contingent with fellow gay school board member Peter Oshinski and gay San Leandro City Councilman Victor Aguilar, no relation. The school board and City Council jointly raised a Pride flag near City Hall in June since the two governing bodies both have offices in the building, which was also lighted in the colors of the flag that month.

"I would sure as hell be interested in getting Pride flags up at our schools, that would be nice," said Aguilar.

He backs pending legislation in Sacramento that would require school districts to start later so that students could get in some extra sleep in the morning.

"I just think the current start times — we have 8 or 8:10 a.m. and some schools start at 7:30 a.m. — it is ridiculous," said Aguilar. "Our kids need time to wake up, eat, and take care of themselves before they come to school."

And Aguilar hopes that Governor Gavin Newsom will sign into law Assembly Bill 711 authored by Assemblyman David Chiu (D-San Francisco). It would require public schools to update the records for transgender and nonbinary students so that they match their legal name and gender identity.

The legislation passed out of the Legislature last week and is before Newsom for his approval. Aguilar told the B.A.R. that his district already uses a record-keeping system that allows students to update their name and gender on their school forms.

Asked to describe his tenure so far on the school board, Aguilar responded that there are power dynamics to navigate at times but that overall there is a lot of camaraderie between the seven members, one of whom is a student.

"Mostly, it has been a very positive one. I am very fortunate to be on a school board where we feel like we are family. We all respect each other," he said. "We can come to common ground and define what we want for our students as a board collectively."