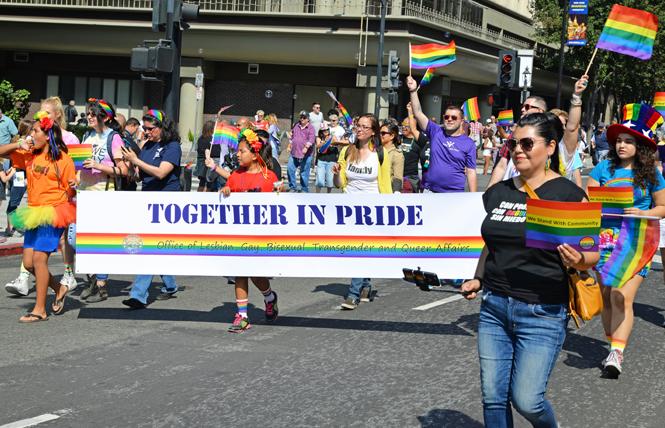 The South Bay will tout its diversity and resistance at the 44th annual Silicon Valley Pride this weekend.

This year's theme is "Diversity in Action."

Pride festivities will take over Cesar Chavez Park in the heart of San Jose August 24-25.

It's expected that several thousand people will be celebrating.

The weekend's events will kick off Saturday with the Transgender and Friends Rally, followed by the Night Festival. The festival will turn back the clock 50 years with a disco-themed dance party in commemoration of the Stonewall riots, according to a July 1 news release from Silicon Valley Pride.

The parade will step off at 10 a.m. Sunday from Market and Julian streets, winding through downtown San Jose toward the park.

"I always look forward to the parade," said Adrienne Keel, director of LGBTQ programs at the LGBTQ Youth Space, a program of Family and Children's Services of Silicon Valley, which is a division of Caminar. "It's cool to see allies on the sidelines and little kids waving Pride flags. It's important for caretakers to show kids that there are all kinds of ways to exist. That is really meaningful to me."

Still resisting
The celebration has added importance due to the political climate in the country and the 50th anniversary in June of the Stonewall riots in New York, which ignited the modern LGBT movement.

Keel and Maribel Martínez, director of the Santa Clara County Office of LGBTQ Affairs, recognized the importance of this year's Pride festivities, noting the underlying rebelliousness of Pride's foundation in protests and resistance.

"From Stonewall to 2019, the LGBTQ community has been fighting for equality, equity, and fairness. Especially, this year, with the recent wave of hate crimes, coming together is paramount to the health of our community," wrote Martínez, a 38-year-old indigenous queer woman of color, in a statement to the Bay Area Reporter.

One of those incidents, while not designated as a hate crime, was the

"Pride, for me, is equally political and celebratory. In this current political climate, when our rights are toyed with seemingly on a daily basis, there is a continued need for action and resistance," said Keel, a 32-year-old lesbian. "I also think it's still important to celebrate our resilience and existence in a world that doesn't always make it easy."

Both women will be marching in the parade with their organizations' contingents and their groups will have booths at the celebration.

Last week, the San Jose Police Department announced it would increase security at large events and schools in light of the recent shootings in nearby Gilroy and around the country.

On its website, Silicon Valley Pride officials said that metal detection wanding and bag checks would be in use this year at all entrances.

The parade contingents will march right into the celebration area, where multi-platinum R&B and soul singer Macy Gray ("I Try," "Sexual Revolution," and "Sweet Baby") is headlining an energetic lineup of entertainers, including Emergency Tiara, AtraLogik, and Rebel Kings of Oakland. Tiara told the B.A.R. in an email interview that in between making the video for her latest single, "2 Kool 4 Skool," she is excited about performing at Pride.

A fan of Gray's, she is especially excited about opening for the singer, Tiara added.

"We love the energy at Pride events," she said, adding that Prides are one of the band's favorite events to perform at. She wrote she's looking forward to "bringing our high energy live act to Silicon Valley Pride with our colorful costumes and choreography."

"In today's crazy political climate, it is more important than ever to celebrate the LGBTQA community," Tiara wrote. "We hope that [we] bring a little bit of sunshine to their day!"
Gray didn't respond to the B.A.R's request for comment by press time.

Teen space returns
One of the ways that the South Bay pride event is showing its diversity is by tapping the LGBTQ Youth Space to host a teen space during Pride.

It will be the first time in about seven years that teens will have a space to call their own to play games, get creative, and simply hang out with friends, said Keel.

She said she was happy to create the space for teens at Pride. Keel believes it's important to have a space for youth so they will "feel included," she said, especially at an event that doesn't usually offer a lot for people under 21.

Keel praised Pride organizers for resurrecting the designated teen space and for increasingly reaching out to various LGBT communities to participate in the annual festivities.

"I think that it's important for any Pride organizer anywhere to be intentional about including young people," said Keel. "Not only do young queer and trans youth deserve spaces, but the next generation will inherit this movement."

The celebration will also include the Hey Girl women's stage; Leatherland, the High Tech Pavilion, Family Garden, and more for Pridegoers.

The B.A.R. is a media sponsor of Silicon Valley Pride.

Silicon Valley Pride happens August 24-25, from noon to 6 p.m., at Cesar Chavez Park, 1 Paseo De San Antonio in San Jose. Some events, like the Transgender and Friends Rally August 24, from 4 to 6 p.m., and the parade, August 25, from 10 a.m. to noon, are free and open to the public. Entrance to the Pride celebration is $5 each day. For more information, visit http://www.svpride.com