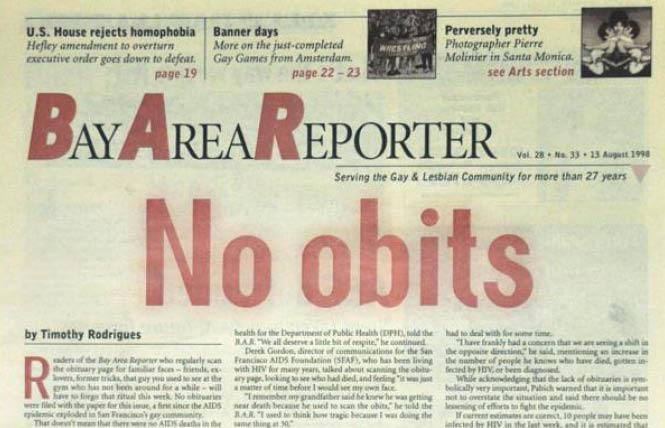 Readers of the Bay Area Reporter who regularly scan
the obituary page for familiar faces - friends, ex-lovers, former tricks, that guy you used to see at the gym who has not been around for a while - will have to forgo that ritual this week. No obituaries were filed with the paper for this issue, a first since the AIDS epidemic exploded in San Francisco's gay community.

That doesn't mean that there were no AIDS deaths in the past week; next week's issue may have more obits than usual.
Nevertheless, after more than 17 years of struggle and death, and some weeks with as many as 31 obituaries printed in the
B.A.R., it seems a new reality may be taking hold, and the community may be on the verge of a new era of the epidemic. Perhaps.

"It is certainly refreshing, and I think we deserve a break like that. By the same token, it is hard to imagine that it will last forever," Dana Van Gorder, director of gay and lesbian
health for the Department of Public Health (DPH), told the B.A.R. "We all deserve a little bit of respite," he continued. Derek Gordon, director of communications for the San Francisco AIDS Foundation (SFAF), who has been living
with HIV for many years, talked about scanning the obituary page, looking to see who had died, and feeling "it was just a matter of time before I would see my own face.

"I remember my grandfather said he knew he was getting near death because he used to scan the obits," he told the B.A.R. "I used to think how tragic because I was doing the same thing at 30."

Gordon cautioned that the epidemic is not over, but acknowledged that the decrease in the number of obituaries reflects a parallel trend in his personal experience. He said he no longer feels the same sense of"doom and despair," and added, "I don't have any [recent] obits to personally tell."

Dick Pabich, AIDS policy advisor to Mayor Willie Brown, and someone who has lived with AIDS for many years, has had the opposite personal experience. He has recently had two close friends die of AIDS, something he says he has not had to deal with for some time.

"I have frankly had a concern that we are seeing a shift in the opposite direction," he said, mentioning an increase in the number of people he knows who have died, gotten infected by HIV, or been diagnosed.

While acknowledging that the lack of obituaries is symbolically very important, Pabich warned that it is important not to overstate the situation and said there should be no lessening of efforts to fight the epidemic.

If current estimates are correct, 10 people may have been infected by HIV in the last week, and it is estimated that 15,000 people living in San Francisco are HIV-positive.

Although scientists, reporters, and government officials have commented that AIDS deaths have been declining since the introduction of new anti-HIV drug regimens, several of those interviewed mentioned that many people cannot obtain, choose not to take, or do not benefit from currently available treatment options. Also, the incidence of HIV/AIDS is increasing among youth, people of color, women, and the heterosexual community in general.

Dr. Mitch Katz, the city's health director, said in a prepared statement, "We are heartened by the substantial decreases in death due to AIDS in San Francisco and elsewhere. Our challenge is to develop therapies for people who are failing the currently available medications and to develop less expensive and more easily administered regimens, so that more people can benefit from HIV treatment.

"Simultaneously, we need to emphasize that the most effective HIV treatment is prevention," Katz added. Pabich emphasized the need for services given that people are living longer. "We need to keep in mind that there are more people around who need services."

Bill Musick, executive director of Maitri Residential Care for People e Living with AIDS, spoke to the changing reality of the epidemic as exemplified in the new name and mission of his organization. The organization recently began accepting as clients people living with AIDS who need intensive care but are fairly stable -for example, someone living with AIDS dementia - and people who might need around-the-clock care to stabilize and possibly improve their health.

He cautioned that although the epidemic may be entering a changed era,"[I] would be cautious linking that to an era where we are not seeing people dying ofAIDS."
In fact, he said, a Maitri resident did die of AIDS last week, and 25 of the 44 people admitted since January have died.

Guy Vandenberg, director of external programs at Continuum HIV Day Services (a program of the agency initiated one and a half year ago focusing on the Tenderloin neighborhood) cautioned that "the folks who are dying are not necessarily B.A.R. readers." For example, the first death of a client of the outreach program was a man who died alone, sitting in a chair, in a Tenderloin residence hotel. He had no one to write his obituary.

"Yes there are less deaths, but it doesn't mean they are not dying, they are just dying in a different community," he said. Perhaps most importantly for B.A.R. readers, the lack of obituaries gives a respite from the grief.

After years of marches and fundraisers, an explosion of AIDS service organizations that may still not be meeting needs, increased government funding after years of neglect, and the literal institutionalization of the epidemic, this development may be a short pause on what is still a very long road ahead.

As AIDS activist JeffGetty cautioned, "We still don't have this thing under control. We've just slowed it down a little bit."