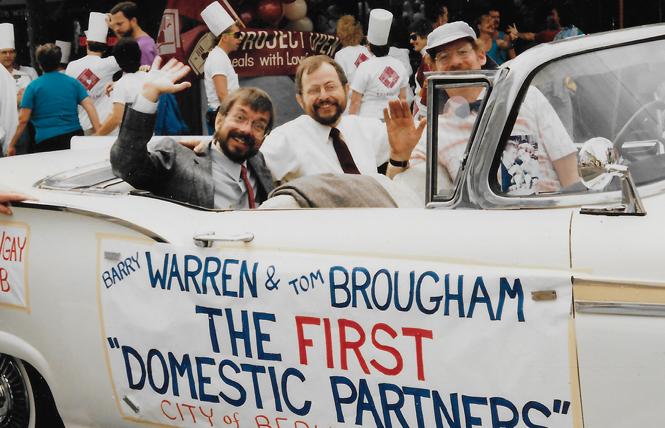 This month marks the 40th anniversary of the "invention" of domestic partnerships policy. On August 21, 1979, I delivered two letters to my employer, the City of Berkeley. The first described and challenged the discriminatory effect of using marriage as the exclusive basis for extending health coverage and other fringe benefits to the spouses of city employees.

The second letter proposed "that the current criteria for membership in the city's group health plans be augmented so that a homosexual employee may enroll her/his domestic partner ..." and set forth specific requirements and procedures for establishing domestic partnerships.

In 1979, marriage equality was inconceivable for two reasons: 1) a preponderance of the lesbian/gay movement viewed marriage as an oppressive institution, and 2) our community had no political power in any state legislature.

My own partner (now husband), Barry Warren, and I saw another path. We did not attack the discrimination inside the definition of marriage. We attacked an employer's choice to use marriage as the exclusive path for family coverage.

We proposed removing the discriminatory effect through contracts. Willing employers, unions, and health maintenance organizations could provide an alternative path to coverage for same-sex partners of employees.

In 1979, we did not ask governments to regulate others. Instead, we asked them, in their capacity as employers, not to discriminate on the basis of sexual orientation in their employment benefits. Private employers could do this too. No legislation was needed, just contracts between willing parties.

The domestic partnership concept arrived as two major crises began to confront our community: family custody issues and the AIDS epidemic. Those crises taught our community about the significance of marriage-linked benefits.

The 1982 San Francisco proposal, against my advice, eliminated the requirement that domestic partners pledge legally-binding mutual financial responsibility for each other. No health maintenance organization would ever have been able to participate without it. All subsequent successful efforts restored that key requirement.

The 1982 San Francisco proposal was rushed forward with little preparation in the lesbian/gay community. Britt underestimated the public reaction that was waiting for the radically new notion that same-gender couples count for something.

The East Bay Lesbian/Gay Democratic Club, founded that year, picked up the pieces. Stone by stone, it built a path forward. By the end of 1984, the City of Berkeley and the Berkeley Unified School District had adopted domestic partnership policies. Crucially, they successfully pressured the first health maintenance organizations to participate. Immediately, other public and private employers around the world began adopting and implementing DP policies. No statewide legislation was needed, just action by willing local groups.

In the late 1980s these local domestic partnership policies inspired the creation of "public registries" of domestic partnership that could be used by private employers. Then came statewide civil union policies that effectively created "marriage lite" for same-sex couples. Local, contract-centered solutions began to be subsumed into these statewide legislative mandates.

First, it focused the lesbian/gay community on the effects of our being excluded from marriage-related benefits while also providing a means for attacking the problem wherever we had local strength.

Second, it educated the public to the then bold idea that lesbians and gay men formed families and equally needed access to family benefits.

Third, it overcame the wariness of health care providers and labor unions about expanding eligibility to same-gender spouses — releasing their natural tendency to expand their "market."

From 1984 until 2004 domestic partnership and civil union policies were the cutting edge of the gay agenda. In the United States these concepts were the center of scores of major political battles — many victories on the Northeast and West coasts and many, many horrific electoral defeats in the rest of the country. For a generation, these policies were the only means through which some people could provide health coverage for their same-sex partners. At the same time, they were the major rallying cry of those who opposed us.

Domestic partnership policy had done its work. When there were no other options, it homed in on willing employers, unions, and health maintenance organizations. Wherever we were locally strong, it gave us local possibilities. A generation before we had clout with state legislatures, hundreds of local domestic partnership policies around the world opened the first cracks in the dam.

Tom Brougham began his career as an East Bay gay activist with the 1969 White Horse picket. He was president of the East Bay Lesbian/Gay Democratic Club 1985-1986 and co-chair of the Campaign Against the LaRouche Measure. In 1987, he became the first openly gay elected official in the East Bay when he was elected to the board of the Peralta Community College District (1987-2000). He and his husband, Barry Warren, have lived together since 1975.