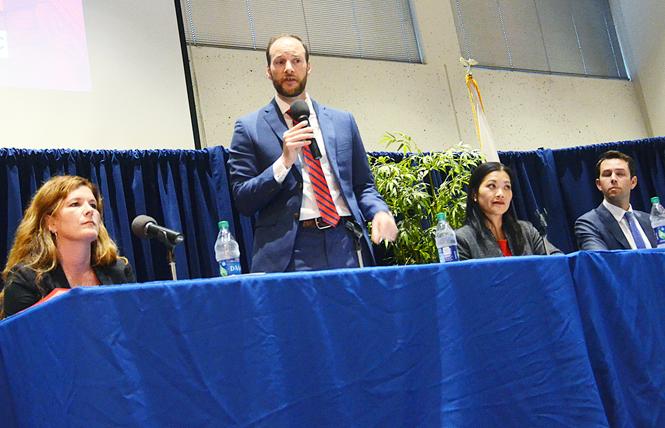 In the first open district attorney race in San Francisco in 110 years, four candidates made their pitches to voters at two recent debates.

Not surprisingly, the candidates largely agree on most issues.

The Alice B. Toklas LGBT Democratic Club and the Gay Asian Pacific Alliance co-sponsored the first debate last month at the African American Art and Culture Complex. The candidates met again August 6 at UC Hastings College of the Law in a forum that was co-sponsored by several organizations, including the American Civil Liberties Union and Indivisible SF. Both debates drew standing-room only crowds.

With each of the contenders hoping to fill the seat of departing District Attorney George Gascón, who announced last year that he would not seek re-election, the tenor of discussion was at times tense.

At Tuesday's debate, Tung was the only candidate who disagreed with the Board of Supervisors vote in June to close San Francisco's juvenile hall, comparing that to "eating cotton candy for breakfast." She pointed out that eliminating, rather than reducing, the footprint of juvenile detention means that violent juvenile offenders will just be shipped out to another city. She received dozens of thumbs-down from the audience.

In a similarly unpopular moment, Dautch called the idea of releasing people from prison en masse "reckless," and suggested a more thoughtful approach based on recent changes in the juvenile justice system; by addressing root causes of criminal behavior and adjusting services toward rehabilitation and mental health reforms.

Loftus, who currently serves as legal counsel for San Francisco Sheriff Vicki Hennessy, was strong on the issue of police oversight, leaning in on her reputation for having terminated more individual officers than any other police commission president before her, as well as insisting on body cameras for all cops in this city, and bringing reforms to the department's use-of-force policies. Loftus promised transparency in investigations of the police themselves if she wins the election, pointing to her track record.

In the portion of the evening when the candidates asked questions of one another, things got pointed.

Dautch attacked Loftus twice: once on campaign finance, pointing out that she is the only candidate who did not pledge not to solicit or accept contributions from city employees, agreeing only that she would not solicit them. Loftus responded that she thinks people should be allowed to help choose who their boss will be.

The second time, he called out a case in which a bisexual woman filed a petition with the U.S. Supreme Court last week after her federal civil lawsuit was dismissed against the San Francisco Police Department for failure to process hundreds of rape kits.

Heather Marlowe held a news conference July 31 in which she said Loftus, when she was on the police commission, assured her no such backlog existed. At the time, Loftus worked for former state Attorney General Kamala Harris, now a U.S. senator running for president.

In a statement last week, Loftus, who is named in the petition, referred the B.A.R. to the city attorney's office and pointed out that the 9th U.S. Circuit Court of Appeals found that there were no valid claims against her or the police commission when it dismissed Marlowe's case.

John Coté, spokesman for the city attorney's office, told the B.A.R. last week that Marlowe's lawsuit is "meritless" and defended the police's handling of her case.

At Tuesday's debate, Loftus pointed to the reforms she instituted, including a 120-day limit for rape kit testing and required victim notification.

No to cash bail
At the July 29 Alice club forum, all four of the candidates came out against cash bail.

Boudin spoke about his unusual background. His parents, members of the Weather Underground, were incarcerated in 1981 when he was 14 months old for driving the getaway car in an armed robbery that left two police officers and a security guard dead. His father is still in prison.

Boudin's experience is unlike most. He described how prison visits shaped his expectations of the criminal justice system, calling it "profoundly broken," and pointed out that he has been working to end money bail for years.

Tung spoke of her concept of "community-centered justice" and expressed a desire for a holistic approach to rehabilitating people out of the "revolving door" of the current justice system. She also spoke on the need for better language and cultural competency training for police and administrators to serve San Francisco's immigrant community.

Loftus said that she wants the people of San Francisco "to reject the idea that we can either be safe or we can have systems that are just."

While Loftus opposed cash bail, she pointed out that its proposed alternatives — electronic monitoring and search conditions — basically reproduce the conditions of probation for people who have not yet been convicted of a crime.