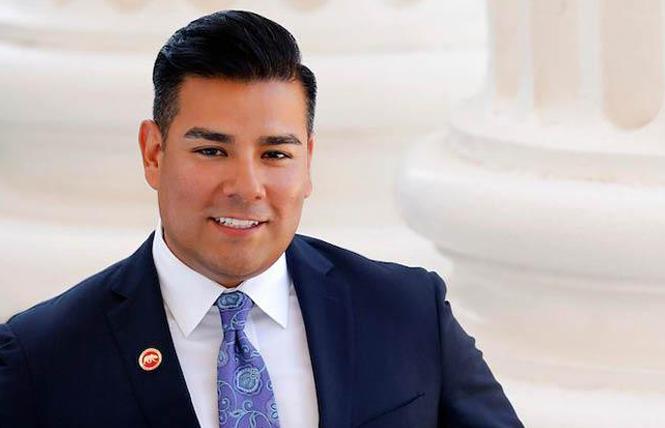 Gay state Insurance Commissioner Ricardo Lara has been under fire in recent weeks from consumer groups who say he's too cozy with the industry he's charged with regulating. One group, Consumer Watchdog, filed a public records request for Lara's calendars; after weeks of foot-dragging, the Sacramento Bee reported Monday that his office said it would release the documents by August 31. While Lara has not been accused of wrongdoing, he fumbled his response to the complaints, which allowed critics an opening to pile on. We're glad he will release his calendars soon — he should have done so from the beginning of his tenure in January.

There are also reports of him meeting with a major insurance executive with business before his department, a possible violation of state law, and intervening in cases affecting a donor, according to the San Diego Union-Tribune. Reports have stated he's accepted donations from the insurance industry. In response, Lara told the paper that he will hire a treasurer for his re-election campaign and return the money. California's insurance commissioner oversees the largest insurance market in the country, with $310 billion in annual policies.

One speech is generating questions from some mainstream media outlets. On July 25, Lara spoke to a meeting of insurance attorneys in Hollywood. During the nearly hourlong speech and Q&A, Lara talked about a number of new initiatives he wants to pursue. We watched a video of the meeting and it does not appear that there was anything "cushy" about it. Lara encouraged the industry to become more consumer-friendly, stressed the importance of insurance coverage for devastating wildfires and earthquakes, and discussed the need for public partnerships to combat distracted driving and promote disaster preparedness.

More needs to be done online, he pointed out. "Consumers are tech savvy and live on their smartphones," he said, adding that consumers expect businesses to interact with their needs. With the majority of Californians using smartphones for everything from shopping to online banking, Lara said the time has come for the insurance industry to catch up and follow suit.

"This is the reality and our department has to start thinking this way," he said, adding that protecting consumer privacy is also paramount. "Today, people can file a claim online. It's clearly time to provide more interactions online."

Regarding auto insurance, Lara said providers should utilize technology, in this case telematics like GPS or navigation systems. "We can no longer talk about auto insurance without considering tech, in my view," he said.

Lara wants to modernize California's antiquated auto-rating criteria for calculating rates from the current system that was established under state Proposition 103. And that could be good for drivers by lowering premiums, he told the attorneys.

In many vehicles, technology controls safety, he added, advocating that companies look at "actual factors, as opposed to gender, and marital status and where drivers live." Smartphones are now integrated with most vehicles. Monitoring driving, he said, "will change behavior. So, I'm excited about the prospects."

Responding to a question, Lara said that legislation isn't needed to engage in discussion. He said his department has working groups that can gauge what people want: "People want access quickly, know what's covered, and if there's a problem, talk to someone quickly."

One attendee noted that an unnamed consumer group might have issues about using technology to monitor driver location and behavior. But Lara was resolute, saying he's a "firm believer" in the need to update the industry. "I don't want to lessen consumer protection. We're also looking at other innovations. We're putting everything on the table. We want people to come in with creative ideas."

When we endorsed him last year, we noted that Lara pledged to work with groups that share his allegiance to consumers, patients, working families, and the state's most vulnerable communities. In order to accomplish this, Lara also needs to talk to principals in the industry, like the attorneys he spoke to last month; that doesn't mean he's in cahoots with them. Discussions are the start of a long-term endeavor to create change so that more people can obtain insurance coverage that meets their needs.

Lara's engagement is a hopeful signal for a more consumer-friendly state insurance department. In a recent statement to Politico, Lara said it's his job "to meet with insurers, consumers, legislators, local government leaders, and all those affected by the industry." He's right, but he needs to be smarter about it going forward so he doesn't give critics the opportunity to distract him from his goals.