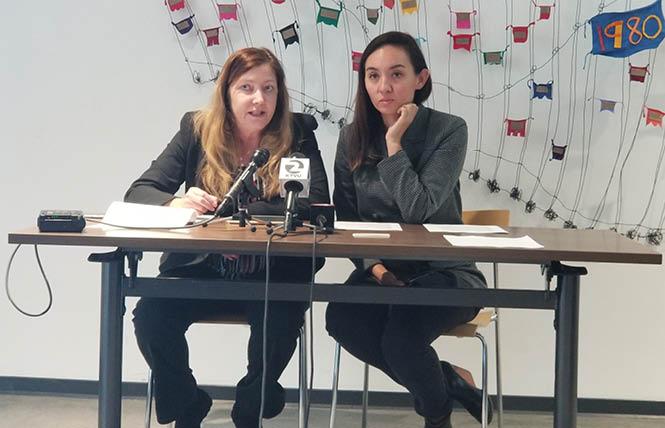 A bisexual woman has filed a petition with the U.S. Supreme Court after her civil lawsuit was dismissed against the San Francisco Police Department for failure to process hundreds of rape kits.

Rape victim-turned-activist Heather Marlowe filed a petition with the Supreme Court July 24, following the dismissal of her civil lawsuit at the U.S. District Court for the Northern District of California. The 9th U.S. Circuit Court of Appeals had upheld that. She alleges that SFPD failed to process over 700 rape kits and fails to adequately investigate sexual assault cases in general.

During a news conference Wednesday at the San Francisco LGBT Community Center, Marlowe and her attorney, Becky James, established the timeline to explain how this case ended up before the Supreme Court.

John Coté, spokesman for the city attorney's office, told the Bay Area Reporter that Marlowe's lawsuit is "meritless" and defended the police's handling of her case.

"Rape is a heinous crime, and it's unfortunate that the DNA testing the San Francisco Police Department conducted on Ms. Marlowe's rape kit nor the department's additional investigation has identified the perpetrator. However, every court that has looked at this lawsuit has agreed that City employees did not violate Ms. Marlowe's constitutional rights. They tried to help her," Coté wrote in a texted reply. "At the end of the day, this office has a duty to defend taxpayer dollars from meritless lawsuits — and this is one of them."

In 2010, Marlowe reported to the SFPD that a stranger had handed her a cup of beer at Bay to Breakers, a daytime marathon event. She felt more intoxicated than she expected after a single beer, then experienced a blackout and loss of approximately eight hours. She awoke sickened in the home of a stranger who told her they had had sex. Marlowe immediately reported the crime and submitted to a rape kit examination. She says the police were generally unhelpful, informing her that it was too difficult to investigate rapes where alcohol was involved and suggesting that she attempt to seek out and identify her assailant on her own.

Two years later, Marlowe was still asking SFPD whether her rape kit had ever been tested and if any information had arisen from it. Through continued pressure, speaking publicly about her ordeal, and garnering media attention, Marlowe was able to press the police department into admitting that her evidence was far from unique. Marlowe's kit had not been tested and was sitting in storage, along with hundreds of others. https://abc7news.com/news/sfpd-finds-hundreds-of-untested-rape-kits/22488/

This failure did not represent a "backlog" at the lab, as it is commonly referred to, but SFPD electing not to send these kits to the lab in the first place. Hundreds of kits were logged, tagged, and simply stored with no further investigation or entry into a national database intended to track repeat offenders, according to the case file.

Her kit eventually was tested but contained irregularities, Marlowe said. The assailant in this case is still unknown.

In 2016, Marlowe filed suit in U.S. District Court for the Northern District of California against the City of San Francisco and then-police commissioner Suzy Loftus among others, alleging that the city had deprived her and people like her of equal protection under the law by essentially refusing to prosecute sexual assault cases deemed difficult. The case was dismissed on the grounds that her claim could not prove the issue was systematic.

The petition filed with the Supreme Court is a writ of certiorari, meaning a request for the court to revisit or review the decision of a lower one. Now that evidence has surfaced that the untested rape kits existed in such number and that the SFPD seemed to have a systematic failure to prosecute this particular crime that disproportionately affects women, Marlowe and her attorneys believe this case could get some justice for her and other survivors of assault.

"It's a woman-crime. It's a crime that they don't take seriously," said James at the news conference. "Financial crimes get investigated. Sexual assault crimes get pushed under the rug. It's not that they didn't believe her; they didn't care."

Based on the outcry from Marlowe and others like her, James is hoping for a change in policy in the way San Francisco treats and investigates rape.

Speaking to where the breakdown in the process truly lies, Marlowe was unequivocal about her objection to the use of the word "backlog."

"These sexual assault kits were never backlogged," she said. "They were not in a lab. They were put in off-site storage facilities, in offices, stuffed into cop cars. Anywhere the police would not be responsible for the evidence and for investigating the cases themselves

"Calling it a 'backlog' assumes that these kits were going to be tested so the cases could be investigated; that the kits were at the lab. The vast majority of these kits were not in labs," she added.

"It's not a issue of police not believing women. These cases are logged as sexual assault, as rape. It's a matter of policing priorities. It's a choice to investigate lower-hanging-fruit crimes, rather than violent crime like rape," Marlowe said. "There's an entire paradigm shift that needs to happen with policing in this country. The problem isn't a lack of funding. When you look at the facts, the federal funding and grants for DNA funding is in the billions, flowing to law enforcement agencies around the country. It's not resources; it's being held to account."

Loftus was not named in the suit simply because she was serving on the police commission when the initial failure to process took place; Marlowe had personal contact with, and assurance from, the former police commissioner that no such backlog existed.

"She became involved in the chain of custody of my assault. A very well-connected socialite woman in the city, after seeing my play, called Kamala Harris, who then called Suzy Loftus to make sure that my rape kit was tested," said Marlowe, who turned her experience into a one-person play, "The Haze," in 2012. "That was happenstance. Think about all the other victims who didn't create a whole play about their assault for some connected person in San Francisco to make a call."

At the time, Harris was state attorney general and Loftus worked in her office. Loftus is now a candidate for San Francisco district attorney.

Marlowe went on to mention an incident where Loftus brought her to a police commission meeting to talk about her assault and how her rape kit was still untested.

"After that, she had San Francisco Police Department come say that all of their rape kits had been tested. It was after that that I had to stand with investigative journalists to force the police to audit their property rooms outside of their lab, because I was certain I was not the only one," said Marlowe.

When asked whether she thought Loftus knew about this failure before the investigation, Marlowe said she couldn't say.

"But it was a traumatizing moment for me to be sort of the one person there claiming that this had to just not be me. Meanwhile, the police were asserting that their labs were clear and all the kits had been tested. It added further injury to this whole experience," Marlowe said.

Loftus responded to the statements about her in the petition via email by referring the B.A.R. to the city attorney's office and pointing out that the 9th Circuit found that there were no valid claims against her or the police commission. She went on to discuss her position on the issue of rape kit testing and future plans for the issue in detail.

"What we learned from Ms. Marlowe's advocacy is important — we changed the law to improve transparency and prioritize the needs of survivors," Loftus wrote. "My approach has always been to work collaboratively with victims, community advocates, and women leaders to remove the barriers that keep sexual assault survivors from getting the justice they deserve."

She wrote that as police commission president, she helped clear "an unacceptable backlog in rape kit tests and passed reforms that held SFPD accountable" for future delays and improved transparency.

"I'm proud that these landmark reforms became the gold standard by which the California Legislature modeled their groundbreaking state law to clear the backlog statewide," Loftus wrote. "Our hard work was recognized by the City of San Francisco on two separate occasions."

She said that if elected DA, she would, in her first 100 days, convene a team to re-examine every eligible rape case that was discharged for lack of evidence.

The SFPD media relations unit maintains that there is no current backlog in sexual assault evidence kits and that the department "has not had a backlog in several years."

"Currently, we process SAEKs within 38 days. That is well within the mandated 120-day processing period," the unit said. It referred the Bay Area Reporter to its most recent report to the police commission on this information (https://bit.ly/2LS9ZI4).

Marlowe's case has been put on the Supreme Court calendar to be considered October 1, James said.

Updated, 8/1/19:This article has been updated to include responses from the SF city attorney's office and Loftus.