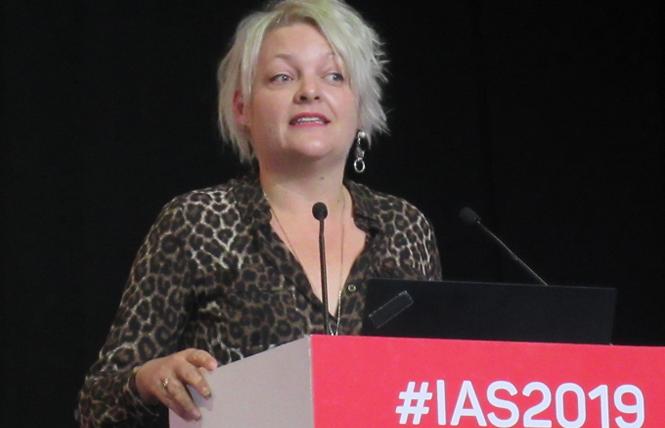 The International AIDS Society Conference on HIV Science that wrapped up in Mexico City featured numerous reports on advances in HIV treatment and prevention, as well as updates on progress toward ending the global epidemic.

A new report released at the conference by amfAR, AVAC, and Friends of the Global Fight Against AIDS, Tuberculosis, and Malaria highlighted six localities that have made impressive gains: San Francisco; London; Rakai, Uganda; New South Wales in Australia; Malawi; and Thailand. Common factors contributing to these successes include campaigns to encourage HIV testing, free and easy access to treatment at the time of diagnosis, scale-up of PrEP and harm reduction services, and efforts to fight stigma and discrimination — all elements of San Francisco's Getting to Zero initiative.

"San Francisco's success in driving down HIV incidence, particularly in the last few years, is due to its deployment and scale-up of proven HIV interventions within a larger context of strong community engagement, near universal health coverage and access, and a bold HIV plan," Jennifer Kates of the Kaiser Family Foundation, who discussed the report at an IAS press conference, told the Bay Area Reporter.

Treatment update
On the treatment front, ViiV Healthcare presented data on its novel HIV attachment inhibitor fostemsavir — an oral antiretroviral that prevents the virus from attaching to immune cells — for people with highly resistant HIV. In a study of 272 participants with extensive prior treatment who were on a failing regimen, 60% achieved viral suppression and their CD4 T cell counts rose by more than 200 after two years on fostemsavir.

For those starting treatment for the first time or currently on effective therapy, simplification was the theme. Two research teams reported that a dual regimen of dolutegravir plus lamivudine (the components of the Dovato combination pill) worked as well as a traditional three-drug regimen. French scientists showed that for people who currently have undetectable viral load, scaling back to just four days of treatment per week maintained viral suppression — and lowered the cost by 43%.

Results from two studies showed that a combination of two long-acting injectable antiretrovirals, cabotegravir and rilpivirine, taken just once a month, maintained HIV suppression and led to greater satisfaction compared with daily pills.

Further back in the drug development pipeline, Gilead Sciences presented promising findings from the first human study of its HIV capsid inhibitor (GS-6207), which prevents the virus from assembling the shell that encases its genetic material.

PrEP progress
On the prevention front, the World Health Organization announced that it has updated its PrEP recommendation to include event-driven PrEP taken before and after sex, as well as the daily regimen, for men who have sex with men.

Once-daily Truvada (tenofovir disoproxil fumarate) is currently the only regimen approved by the federal Food and Drug Administration for HIV prevention. But some U.S. clinics, including the San Francisco AIDS Foundation's Magnet sexual health program at Strut, are already offering the on-demand regimen, dubbed PrEP 2-1-1.

This involves taking two Truvada pills at least two hours — but preferably 24 hours — before engaging in sex, then another pill 24 hours after sex, and a final pill another 24 hours after that. If sex occurs multiple days in a row, one pill should be taken each day, until 48 hours after the last occasion.

When used correctly, this regimen is highly effective for gay and bisexual men. Dr. Jean-Michel Molina from the University of Paris presented updated findings showing that no participants in the French Prévenir study who consistently used either daily or event-driven PrEP have acquired HIV.

Due to a lack of evidence, however, the WHO does not recommend PrEP 2-1-1 for cisgender or transgender women, transgender men who have vaginal/frontal sex, or men having sex with women.

Turning to daily PrEP, researchers presented an in-depth analysis from the DISCOVER trial, which compared Truvada versus Descovy (tenofovir alafenamide/emtricitabine) for PrEP. This updated formulation of tenofovir is less likely to cause kidney problems and bone loss.

As reported at the Conference on Retroviruses and Opportunistic Infections in March, Truvada and Descovy — both by Gilead — were highly effective at preventing HIV. In this study of more than 5,300 men who have sex with men, there were seven new infections in the Descovy group and 15 in the Truvada group, most of which occurred in people with low drug levels, indicating that they were not using PrEP consistently. This difference was not statistically significant, meaning it could have been due to chance.

The pharmacokinetic data presented at IAS showed that active tenofovir in HIV-susceptible immune cells reached higher levels, did so more rapidly, and persisted longer in people taking Descovy compared with those taking Truvada.

Although the researchers concluded that Descovy "is a safer, potentially more efficacious option" for PrEP — especially for those using the 2-1-1 regimen — some think its advantages were overstated, given the very low rate of new HIV infections in both arms of DISCOVER and the very high effectiveness of Truvada in clinical trials and real-world use.

Jeremiah Johnson of the Treatment Action Group questioned whether the supposed advantages of Descovy are worth its cost, which is similar to that of Truvada now, but likely to be substantially more expensive once Truvada, priced at about $1,600 a month, goes off patent next year.

Speaking at the conference's closing session, Dr. Laura Waters from the Mortimer Market Centre sexual health clinic in London suggested that conclusions about the advantages of Descovy "are perhaps premature" and that "the emphasis should be on expanding access to affordable PrEP worldwide."

Finally, researchers from Merck presented data from the first human study of a long-term implant, inserted under the skin of the upper arm, that releases the experimental antiretroviral islatravir (formerly known as MK-8591).

Although only tested so far for safety in HIV-negative volunteers, a drug level analysis showed that the implant may maintain protective levels of this novel nucleoside reverse transcriptase translocation inhibitor for a year or longer.