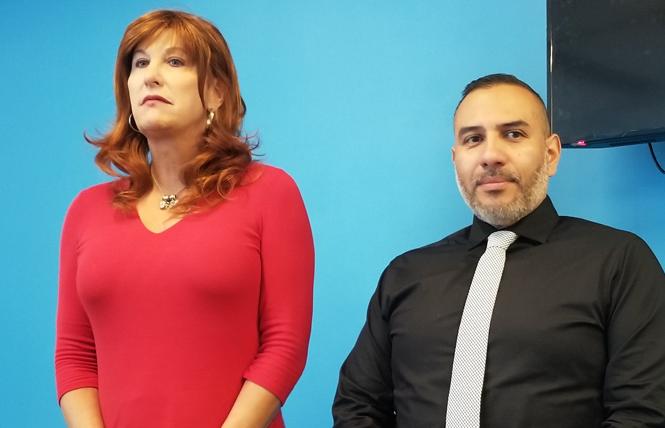 San Francisco Pride officials said this week that they want misdemeanor charges dropped against two protesters who were arrested following their alleged involvement in a demonstration that held up last month's Pride parade for nearly an hour.

Reading from a prepared statement at a news conference Tuesday, San Francisco LGBT Pride Celebration Committee interim Executive Director Fred Lopez first detailed the incident itself. He acknowledged that the protest was inconvenient to the over 50,000 participants and 100,000 spectators at the event. Lopez outlined the protesters' concerns over the presence of police at Pride, and said that SF Pride officials attempted to step in and de-escalate the situation before San Francisco police made arrests.

According to members of an autonomous coalition that claimed responsibility for the blockade, members were also concerned about the corporate commercialization of SF Pride.

Lopez's statement stressed that Pride's board worked to "facilitate time so that the demands of the activists could be heard."

He also said that Pride's official position that the charges against the protesters should be dropped was posted to the organization's website July 3.

"These activists identify as members of the LGBTQ+ community, but don't agree with how our parade and celebration are structured," Lopez said, referring to Taryn Saldivar, 21, of Oakland, and Kenneth Bilecki, 27, of Santa Rosa.

According to San Francisco police, Saldivar was charged with battery on a police officer, resisting arrest, and interfering with a parade route.

The Bay Area Reporter has attempted to contact both Saldivar and Bilecki since the day of the parade, but has not reached either of them.

Although SF Pride officially stated it wants the charges dropped and said at the news conference that it intends to write letters of support for both individuals charged in this matter, Lopez stressed that ultimately it's out of SF Pride's hands.

"San Francisco Pride is not a decision maker in whether or not the DA decides to continue with the charges," he said at the news conference at the San Francisco LGBT Community Center. "We want to make it clear that we have encouraged the DA to drop all charges related to this incident. This has been our position since the day of the parade."

Reached for comment San Francisco District Attorney's office spokesman Max Szabo wrote in an email, "Prosecutors analyze the facts as it applies to the law. We welcome feedback, but the First Amendment right to freedom of speech does not grant anyone the freedom to batter a police officer or any other member of our community."

Lopez went on to describe the ways he believes SF Pride's relationship with police can improve, including reaching out to the San Francisco Department of Police Accountability, which is a civilian agency that receives complaints and allegations of misconduct by police and makes policy recommendations.

Addressing the ongoing tension between police and members of marginalized communities, Lopez said, "We support change in any law enforcement system that unfairly targets trans individuals and people of color. We acknowledge systemic racism and understand the urgency for ideas and solutions which can create equitable progress."

Suzanne Ford, the organization's treasurer, was present throughout the conference but did not audibly speak.

When asked by the Bay Area Reporter about the irony of an event that commemorates an act of protest — the 1969 Stonewall riot in New York became the annual locus for Pride events across the country — being disrupted by protest, Lopez said he did not understand the question.

Rephrasing, the B.A.R. asked specifically about provision of space and time for dissenting voices around contentious issues such as the presence of police at Pride

"We weren't aware of the protest before it took place," Lopez said. "If we had been aware, we do actually create a First Amendment space along the parade route for folks who would like to use it. We would have worked with the community members to create space that would make sense."

"Suzanne reminded me that the board leads a resistance contingent. This is the third year in a row. And that goes sort of at the beginning of the parade, just after Dykes on Bikes," he said. "That contingent was created as a way for folks to voice their resistance, initially to the Trump administration and the policies therein. Since then, it has grown to include a number of voices who align with progressive values across the board."

To read the full statement from SF Pride, click here.