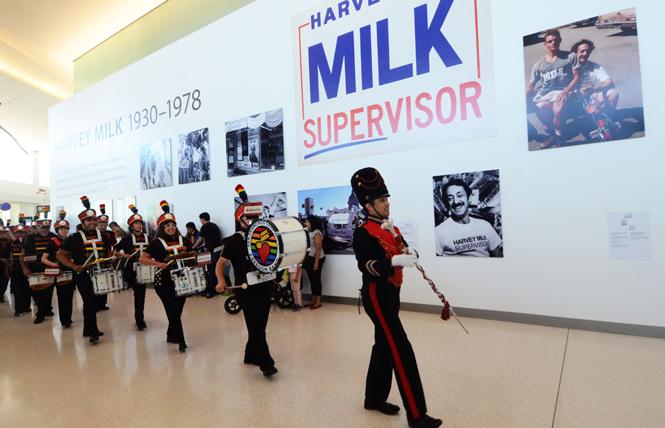 Walking into the new Harvey Milk Terminal 1 for the first time and seeing the temporary exhibit about its namesake, the first gay person to win elective office in San Francisco and California, was awe-inspiring for Oakland resident Maceo Persson.

A queer transgender man who works in the San Francisco Office of Transgender Initiatives, Persson is well aware of Milk's story and legacy. After winning a seat on the San Francisco Board of Supervisors in 1977, Milk was tragically gunned down 11 months into his first term.

Persson was still taken aback at seeing the array of 97 photos and archival material the SFO Museum incorporated into the exhibit "Harvey Milk: Messenger of Hope," which is mounted on a 380 foot long by 30 foot tall wall along the first half of the terminal.

"For me it is surprisingly moving to see it in person," said Persson, 36, at the grand opening community day that the San Francisco International Airport hosted Saturday, July 20, for the public to see the new aviation facility. "I have a lot of awe and respect of Milk, who has been in my consciousness for a while. We talk of Milk a lot at work, but to see such a big public space devoted to him was a lot."

The terminal, the first airport facility in the world named after an LGBT leader, re-opened a nine-gate section Tuesday, July 23, to passengers on Southwest and JetBlue domestic flights. It is the first phase of a $2.4 billion remodel of the facility to be completed by 2023.

Over the weekend more than 5,500 people took up the airport's invitation to get a sneak peek of the new Milk terminal, one of three domestic terminals at SFO in addition to the international terminal. As of now none of the other three terminals are named after local luminaries, though the departures hall of the international terminal was named after the late mayor Ed Lee by the city's airport commission.

It was Lee who brokered a deal with gay former supervisor David Campos, now chair of the San Francisco Democratic Party, to name a terminal in honor of Milk. Campos had wanted to name the entire airport for the gay icon, but his idea met with strong opposition and was eventually grounded.

Shocking scale
The naming of the Milk terminal was also controversial, particularly with how the airport would design the signage for it. It led to a legislative fight at City Hall led by Campos' successor and former aide, District 9 Supervisor Hillary Ronen, that ended with strict rules for how the airport should refer to the terminal so that Milk's name is given due prominence.

Thus, when political leaders and LGBT community members were given an exclusive first look in June at the exhibit about Milk in the terminal, its scale shocked and overwhelmed them. Attendees of Saturday's event had a similar reaction.

"Seeing it gave lots of feelings for me, even some goose bumps," said Sister Amor Ah'Quality, 51, a member of the Sisters of Perpetual Indulgence drag nun group whose given name is Gwen Essex.

On the dental faculty at UCSF, Essex, who is bisexual and grew up in San Diego, now lives in San Francisco. Familiar with Milk's story, she appreciates the fact that the airport exhibit will help educate people from around the globe who may have never heard of him.

"People don't know the history. This is a chance to learn about it," she said. "It is beautifully done, and you don't have to go to a museum to see it."

The 30-year-old San Francisco resident, who is nonbinary and also known as Mary Wannah, grew up in Virginia where they didn't learn about Milk in school. Now travelers of all ages will have a chance, they noted, through the exhibit to familiarize themselves with Milk as well as the history of the local LGBT community.

"We all know there will be people who go past these pictures and look at them with contempt," they said. "All you can do is support the people who helped get him elected. Milk was the face of a larger movement that continues today."

A permanent exhibit detailing Milk's life and his place in history will be incorporated into an area of the terminal the SFO Museum is calling the Central Inglenook. Some 40 images from the temporary installation will be featured in it when it opens next March, with part of it accessible outside of the secured area for the terminal.

It will likely include several of the more personal images of Milk that museum staff selected for the current show, as they have struck a special chord with the public. San Francisco resident Bob Goldfarb, 57, pointed to those photos as among his favorite.

"They did a really nice job presenting some of the history of Harvey Milk. It was fascinating to see some of the photos, some of which I had never seen before," said Goldfarb, a gay man who chairs the committee establishing the city's leather LGBT cultural district in the South of Market neighborhood. "It was interesting to see the younger, more personal photos of Milk."

Vincent Sparacio, 26, a gay man who grew up in New Jersey, didn't know much about Milk until he moved to San Francisco at the age of 18. He was impressed, he said, by the breadth of the exhibit.

"It gave the depth of Harvey's life," said Sparacio, "coupled with his impact on the local LGBT community, like starting the Castro Street Fair, and how it has evolved from then to now."

Having spoken at one of the City Hall hearings focused on how the signage for the Milk terminal should appear, Goldfarb attended the grand opening party to see how it turned out. He is also a self-professed "travel nerd" and wanted to check out the remodeled facility.

"I think they did a nice job with the design," he said. "When it opens it will be very passenger-friendly. The lounge features will be a nice addition; we don't see so much of that in the other terminals."

"We are changing the traveler's experience here, more so than any other airport in the world," said Mayor London Breed at the community day event. "I am so excited for what the future of SFO holds."

In terms of the Milk exhibits incorporated into the new facility, Breed noted, "When people from around the world land at terminal 1 they will see an incredible legacy."

For more information about the terminal project, visit https://www.flysfo.com/about-sfo/airport-development/t1.