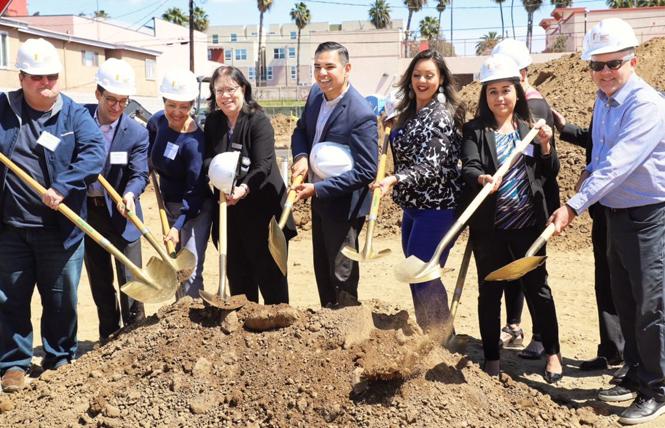 Long Beach Mayor Robert Garcia, center, seen here at a groundbreaking, is focused on his second term rather than running for a state legislative seat next year. Photo: Courtesy Mayor's Office

Ever since he won a seat on Long Beach's City Council in 2009, Robert Garcia has faced questions about what office he would seek next. In 2014 one answer came when he won his bid to be his city's first elected gay mayor.

Easily re-elected to another four-year mayoral term in April 2018, Garcia was seen as a strong candidate to run for Ricardo Lara's state Senate seat should he be elected as California's insurance commissioner last November. Yet shortly after Lara became the first gay person elected to statewide office in the Golden State, Garcia announced he wouldn't enter the special election for Lara's 33rd state senatorial district this spring. Instead, he endorsed the ultimate winner of the race, Lena Gonzalez, who had served on the Long Beach City Council.

Term limited to seeking one more four-year term as mayor, it is inevitable that Garcia will set his sights on a higher office if he wants to remain an elected leader. For now he is remaining tightlipped on his political future when his mayoralty ends.

When he sat down with the Bay Area Reporter for an interview this spring, Garcia did rule out serving in the state Legislature. Asked about the entreaties that he run for either a seat in the Assembly or Senate, Garcia said he wasn't interested.

"Definitely not the state Legislature, I am not going to run for that," he said. "I mean, certainly, I can run for that. And, you know, I think people were obviously very supportive, but I am just not interested in that."

For now, he said his focus is on being mayor.

"There's no better job in the world than being mayor of your city," said Garcia, who was born in Long Beach and graduated from Cal State Long Beach. "This is where I need to be. I just got re-elected and I'm totally committed to do this job."

"We have lots of hopes for him. He is a successful mayor in Long Beach who is really popular," said Zbur. "We have high hopes there will be another race he will enter, but he is not termed out of office yet."

Garcia's decision not to seek a legislative seat does complicate efforts by EQCA and LGBT leaders to recruit out candidates for state Assembly or Senate in order to ensure the longevity of the Legislative LGBTQ Caucus. It currently has seven members, one of whom will be leaving office next year due to term limits, and another because of seeking office outside the Legislature.

As the B.A.R. has previously reported, EQCA has been encouraging local LGBT elected leaders to run for Assembly or Senate seats in order to maintain or increase membership of the LGBTQ legislative caucus. The task is a bit difficult for the 2020 cycle as there are fewer open seats than last year, and incumbents often do not face intraparty challengers.

"We are focused on 2020 right now and trying to do leadership recruitment," said Zbur.

To date, there are five out non-incumbents known to be seeking state legislative seats in 2020, one of whom is already serving in the Legislature and is running to succeed a termed out LGBT caucus member. Lesbian Assemblywoman Susan Talamantes Eggman (D-Stockton) is seeking the 5th Senate District seat currently held by lesbian state Senator Cathleen Galgiani (D-Stockton), who is termed out of office next year.

Eggman's contest will be a top priority for EQCA, which early endorsed her Senate bid. EQCA also early endorsed gay former Assemblyman John Laird (D-Santa Cruz) in his race to succeed state Senator Bill Monning (D-Carmel), who is termed out of his 17th Senate District seat along the Central Coast.

Also securing EQCA's early endorsement was gay San Diego City Councilman Chris Ward, who is running to succeed gay Assemblyman Todd Gloria (D-San Diego) in the 78th Assembly District. Gloria is a heavy favorite to be the first gay elected mayor of his city next year, having served in the role in an interim capacity several years ago.

Brough has since been accused of inappropriate behavior by four women and is likely to face a Republican opponent for his Orange County seat in addition to Rhinehart. EQCA endorsed Rhinehart late in last year's campaign and was impressed by how well he ended up doing in a district that favors Republicans.

"He is a good candidate; he is just running in a very red district," noted Zbur.

EQCA is also considering an early endorsement by August of San Bernardino City Unified School District board member Abigail Medina, who identifies as both queer and lesbian, in the 23rd state Senate District race. She is one of a number of candidates running to succeed the incumbent, Mike Morrell (R-Rancho Cucamonga), who is termed out of office next year.

In a release about having its support, Medina stated that it was "especially meaningful" to her since her "campaign is about breaking every barrier in state Senate District 23 including the rainbow glass ceiling. Anyone who has ever been asked to hide their own humanity or assimilate into a predominant culture knows the importance of representation."

There may be three Assembly races with lesbian non-incumbent candidates next year, as a trio of challengers who fell short in 2018 has pulled papers with an eye toward running again in 2020. They include former Richmond City Councilwoman Jovanka Beckles, who lost to freshman Assemblywoman Buffy Wicks (D-Oakland) in the East Bay's 15th Assembly District and has formed an exploratory committee for a rematch.

Real estate agent Sunday Gover could challenge Assemblyman Brian Maienschein (D-San Diego), who left the Republican Party this year and will be running for re-election as a Democrat in the 77th Assembly District. And in Placer County, former San Jose resident Jackie Smith is expected to run again against Assemblyman Kevin Kiley (R-Granite Bay) for the 6th Assembly District seat.

Of the quartet, Cervantes faces the likeliest chance of being opposed by a strong Republican opponent. The GOP targeted her last year, but she was able to win a second term.

To do so online, visit https://action.eqca.org/Leadership_2019.