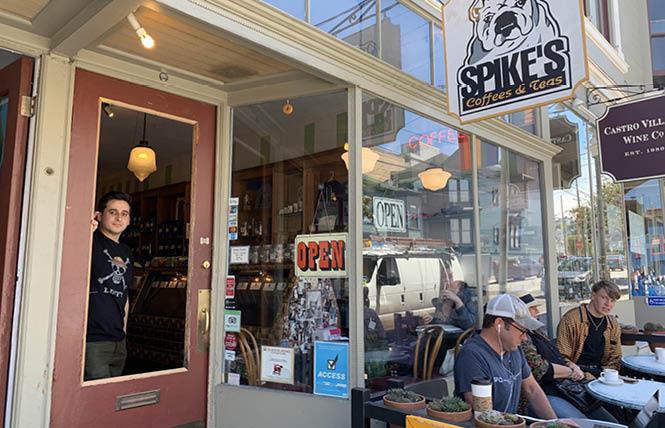 Spike's barista Eric Marrujo stands by the front door of the coffee shop, before the glass was replaced Tuesday afternoon. Photo: Sari Staver

Spike's, a longtime gay-owned Castro coffee shop at 4117 19th Street, was burglarized in the early morning hours of July 23.

A neighbor, who didn't want his name used, called the police at 3:30 a.m. after hearing a window being smashed. He told the Bay Area Reporter that he saw a man, about 6 feet tall, running away from the scene. But before the police arrived a few minutes later, the suspect returned to the coffee shop and stole a handful of children's T-shirts, which he dropped at the corner while fleeing from police.

Spike's was open for business as usual on Tuesday, with a glass repair company finishing up the new window by mid-afternoon. The owner was not available for comment.

A similar incident happened several weeks ago, when someone smashed the display window at another gay-owned business, PO Plus, at 584 Castro Street, near 19th, around the corner from Spike's.

In a separate incident nearby on Tuesday at 1 p.m., police were investigating a report of a man seen with a handgun at 21st and Sanchez streets, according to the website Citizen. According to the crime-spotting website, officers at the scene said two people were reportedly climbing down a building.

The San Francisco Police Department has not yet returned a message seeking further details about both incidents.

Window smashing has been an ongoing problem in the Castro. The B.A.R. reported on several other incidents earlier this year.