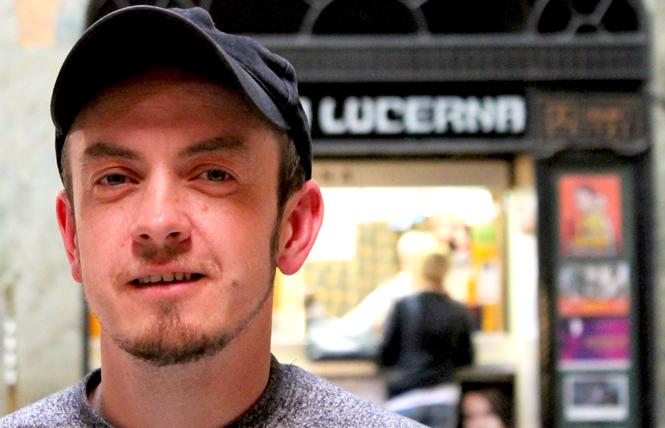 Emerging from the few sensationalized tabloid headlines and TV shows that have been Czechia's only exposure to the country's transgender community, trans Czechs are stepping out and speaking up about their experiences.

The country's transgender community has become more visible in the last five years as they challenge the country's gender recognition laws and claim their place in society, said Viktor Heumann, a 41-year-old trans man who is the director of Transparent, Czechia's transgender organization.

The Czech Republic is working to revive its original Latin short-form name, Czechia.

In the spring, the Bay Area Reporter traveled to Prague and met up with Heumann to learn more about the community's struggles and vision for the future.

It's an exciting moment for Czechia's transgender community, which is building itself as it faces an uphill battle to transform gender recognition laws and acceptance.

Transgender individuals can legally change their identity, but the process is arduous.

"It's possible officially, but the administrative procedure is a bit complicated," said Heumann. "There's still some conditions that are rather discriminatory that require trans people to undergo certain things that are not considered OK in terms of human rights."

Those issues involve legal terminology, whereby the government and the public tend to use "transsexual," said Heumann, and a long, invasive transition process.

It includes a medical diagnosis, medical procedures, a court ruling, and selecting a gender-neutral name during the transition. Czech names are gendered, including the endings of last names. Married individuals have to get divorced and sterilization is required.

"Which is in breach of international standards," Heumann said.

In 2017, the European Court of Human Rights made a landmark ruling that the sterilization requirement for legal gender recognition violated human rights. The court ordered the then-20 European Union countries that required sterilization to revise their laws to become compliant. Future gender identity laws weren't permitted to include sterilization.

Two years later, the law is still on Czechia's books. Fourteen countries still require this procedure, according to Transgender Europe.

"We are hoping that we will change soon and some other things that are not quite administrative procedures that are not very friendly to trans people," Heumann said.

He explained that the Ministry of Justice proposed an amendment to the Civic Code, Section 29, and the Act on Specific Healthcare Services no. 373/2011 Coll. to ease access for transgender individuals to gain legal gender recognition.

"In our view, this is not ideal because it still reinforces the position of the doctors here, which is not very desirable for trans people," he said. "They misuse or abuse their position toward trans people applying diagnostic treatments and inquiries that are traumatizing to trans people or inhumane and abusive."

Czechs revere doctors, which puts transgender people in a bind.

However, the desire to live fully as the gender they want to be is strong for transgender Czechs.

"Many people go through the surgery in order to have their name and their gender marker on their documents correct," said Heumann.

Being transgender is uncomfortable during the transition period or for people like Heumann, who began transitioning about five years ago but chose not to go through the complete process.

"There's a lot of pressure here for people to undergo surgical treatment," he continued.

Transgender individuals who completed transitioning under the current system reported the most satisfaction (69%) when asked about the current legal gender recognition system. Those who haven't, or aren't planning on completing the process, were the least satisfied (20%), according to the Transparent survey.

Changing public perception
Changing the law isn't the only challenge Czech's trans community faces. Changing the public's perception and understanding of who a transgender person is and what being transgender means is another obstacle transgender activists face.

Two surveys - "Being LGBT+ in the Czech Republic: The LGBT+ experience of people with prejudice, discrimination, harassment and hate violence" and "The Hopes and Fears of Trans People-First Survey Report" - found similar disparity among acceptance, quality of life, and discrimination for Czech transgender people.

Czechia's largest survey about discrimination against the LGBT community, "Being LGBT + in the Czech Republic," published by the Office of the Public Defender of Rights of the Czech Republic in May, found that up to 86% of trans people felt discriminated against in the last five years. The survey, conducted by an ombudsman and translated using Google Translate, discovered it is significantly more compared to lesbians (58%) and gays (33%). The study also revealed that trans people were about a third less likely than gays, lesbians, and bisexuals to be open about their gender identity.

The study surveyed 1,981 respondents ages 13 and up. The office worked with Queer Geography, which created the survey questions, and Prague Pride, which distributed the survey between September 19 and November 5, 2018. The research was funded by the European Union Rights, Equality and Citizenship Program (2014-2020).

Transparent found similar results with its smaller survey, "The Hopes and Fears of Trans People," also published earlier this year. The survey, conducted June 7 through October 11, 2018, found that out of 396 transgender respondents roughly one-third (32.8%) "do not feel good in this country" when asked, "What is your life like as a trans person in the Czech Republic?" Responding to the same question, two-thirds rated their quality of life positively.

At the same time, the organization found that the degree of openness about one's gender identity overall was 52%.

Heumann is hopeful about the community's future, despite the challenges Czechia's transgender community faces, especially as he sees more transgender people come out.

"We are getting more and more visible in the way that we want to be visible, which is good," he said.

TV shows like "Most" and "Terapie" provided the country's first look at transgender people, but the characters were written and played by straight people and they were very stereotyped, said Heumann and Walek.

"Without having some kind of balance or objective picture of trans people, people will still have this distorted image of a trans person as a threat," said Heumann. "They just don't know anything about trans people, so it's a process to get visible first."

The act has the support of top House Democrats with 52 co-sponsors. There is also support from 21 leading LGBTI advocacy organizations. The act would codify in law the Special Envoy for the Human Rights of LGBTI Persons position as well as require the State Department to document cases of human rights abuses and discrimination against LGBTI people around the world.

It would also provide permission for the U.S. to institute sanctions against foreign individuals who are responsible for egregious abuses and murders of LGBTI populations. Additionally, the bill ensures fair access to asylum and refugee programs for LGBTI individuals who face persecution because of their sexual orientation, according to a July 22 news release from Titus' office.

"No person should suffer from discrimination because of who they are or whom they love," Titus said in the release. "Under the Trump administration, the U.S. is failing to protect the rights of LGBTI people at home and abroad. This bill will help restore our role in promoting LGBTI rights around the world and punishing regimes that persecute people based on their sexual orientation or gender identity."

"With the introduction of this legislation, Congress sends an important message that U.S. leaders remain committed to advancing human rights around the globe," Human Rights Campaign government affairs director David Stacy said in the release.

The 41-year-old activist's body was found with multiple stab wounds near her St. Petersburg home July 20, reported Radio Free Europe/Radio Liberty. She recently received death threats that were reported to the police. Authorities wouldn't confirm they received the reports.

The BBC reported that a suspect was detained. It's unclear if her murder is connected to her activism or the death threats or if police are investigating her death as a hate crime, reported RFERL.

Poland issues 'LGBT-free zone' stickers
"LGBT-free zones" are being established throughout Poland as the country's ruling party declared LGBT people a national threat to the country.

Jaros?aw Kaczy?ski, the ruling Law and Justice Party's leader, called the LGBT community an imported "threat to Polish identity, to our nation, to its existence and, thus, to the Polish state."

Conservative magazine Gazeta Polska is distributing LGBT-free zone stickers, which are rainbow stickers with a black "X," to its readers in its next issue, due to hit newsstands sometime this week.

The magazine's editor in chief, Tomasz Sakiewicz, told Polish TV station Republika that the stickers are in "opposition to the forceful imposition of LGBT ideology."

The Independent reported that queer activists have counted an estimated 30 "LGBT-free zone" declarations in various cities and provinces throughout the country's conservative southeast region.

Hate crimes have noticeably increased, but by how much is unclear, said activists. Poland has been criticized for not keeping reliable records on hate crimes against LGBT people.

"We've witnessed a huge, ultra-conservative backlash since the beginning of this year, with the entire government propaganda machine targeting the LGBT community here in Poland, and scapegoating us as the public enemy," said Hubert Sobecki, co-president of the Warsaw-based LGBT+ organization Love Does Not Exclude. "But this is certainly something new and seems to be crossing the line of hate speech."

Vyacheslav Melnyk, director of Campaign Against Homophobia, believes the message is more than hate speech.

"The message that it sends is pretty much straightforward," Melnyk told The Independent. "There is no place for LGBT people in our community."

U.S. Ambassador to Poland Georgette Mosbacher denounced the anti-LGBT sticker in a tweet.

"I am disappointed and concerned that some groups use stickers to promote hatred and intolerance," she wrote. "We respect freedom of speech, but we must stand together on the side of values such as diversity and tolerance."

The anti-gay campaign comes as fall elections near. The hateful rhetoric from the Law and Justice Party is similar to its anti-immigrant campaign during the previous election.

IACHR calls on Honduras to investigate trans murders
A TV show host and an LGBT rights activist were among three transgender women who were gunned down in three different Honduran cities this month.

The murders prompted the Inter-American Commission on Human Rights to call on the Central American country to investigate the growing violence against trans people.

There have been 21 murders of LGBT people since January in Honduras, according to Cattrachas, an LGBT organization. Devdiscourse reported that the figure is up from 18 during the same period last year.

Since 2009, more than 300 LGBT people have been murdered in the country, according to IACHR.

Police have detained two potential suspects for the murder of LGBT rights activist Bessy Ferrera, 40, according to IACHR, reported Devdiscourse.

Additionally, the ministry is working with various government authorities and community organizations to promote "a culture of respect" with the goal to improve LGBT people's access to health, education, employment, and political participation.