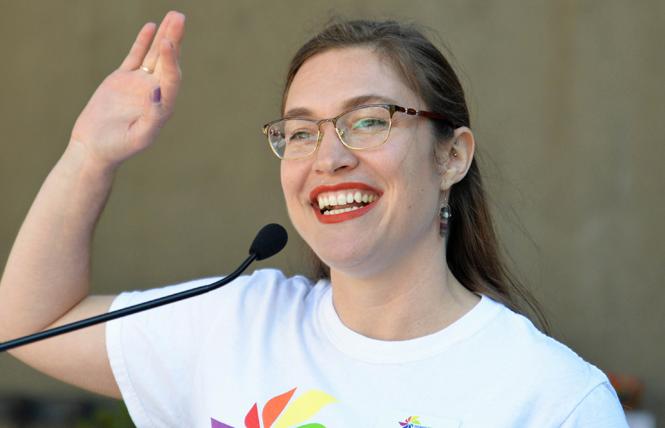 The San Mateo County Pride Center has hired two new staff and is gearing up for fall events.

Program director Lisa Putkey spoke with the Bay Area Reporter by phone about these developments, as well as future plans for the center.

She explained that the center is a collaboration between four nonprofits and the county. StarVista is the lead agency, holding all the contracts, while Outlet runs the youth program. The other two nonprofit partners are Daly City Partnerships and Peninsula Family Services.

Putkey, a 33-year-old queer woman, explained that the position of youth organizer opened up when a former employee went back to school and that Yamaguchi is taking on that role.

"Hiring America was a perfect solution," Putkey. "They were already involved with the center and have worked in education and they're part of the community. The old coordinator started the program from nothing. Now, the youth program takes over the whole center when they have events, with really robust numbers."

According to Putkey, those events include the first queer prom in San Mateo County, clothing swaps, and ongoing youth support groups.

Yamaguchi, described by the post as a nonbinary individual who uses they/them pronouns, will work with Outlet. According to their LinkedIn profile, Yamaguchi holds a bachelor's degree in biology. The B.A.R. was unable to contact Yamaguchi to discuss the role with them.

Davidson, a 57-year-old pansexual polyamorous woman, was brought on as a new program assistant to the center. She spoke with the B.A.R. by phone about her work there as a "very part-time intern," as she put it.

"I've been leading discussions for the Polyamorous Peer Power Group at the Pride center for about a year now on polyamory and open relationships and other forms of non-monogamy, which I've been doing for decades elsewhere. Most of my work is done at Love Outside the Box, which is my personal relationship coaching services for non-monogamous relationships," Davidson said, noting that she is a coach and not a certified therapist.

"Ultimately, we want to foster stronger relationships within the Peninsula communities and between LGBTQ folks and polyamorous folks. There's a lot of overlap there, but also a lot of misunderstanding," Davidson said.

Davidson explained that while her previous work at the center was mostly devoted to non-monogamy, her new position is focused on the needs of elders in the LGBTQ community aged 50 and over.

"I'm hoping to do a lot of community outreach to let people know that the center exists, and the great variety of programming and services available there," she said. "The stigma is still very present for older folks, many of whom don't come to the center because they're afraid of what their families or local communities might say. Particularly if they live in senior centers, that can be quite serious. A lot of older folks go back into the closet."

When asked about specific programming, Davidson noted that the center's offerings are part social and part informative.

"We just had an event for affordable housing for seniors, and I'm sure we'll be providing that kind of informational event," she said. "We also do 'diner rounds,' where we set up lunch at a restaurant as a social outing for the older folks to meet new friends. Everyone pays their own check, but events that actually take place at the center are free."

Future plans
When asked what's ahead for the center, Putkey was very focused on these events and services for LGBTQ seniors.

"We're currently trying to get more hours and more funding for the older adult program so that they can thrive in the same way as youth," she said.

The Pride center just completed a needs assessment survey for older adults to find out what kind of programming would serve them best. The center has begun working with residential homes and senior centers, which Putkey acknowledged have not traditionally been inclusive of the LGBTQ community.

Putkey and her staff are optimistic, however. The center has another job opening newly posted to its website looking to hire a part-time event coordinator to help plan, among other things, San Mateo's first-ever queer adult prom in September. The theme is "Somewhere Over the Rainbow." The position pays $20 per hour.

According to its 2018 annual report, the San Mateo County Pride Center serves over 3,000 unique individuals per year, 30% of whom are over 40 years old. The annual report does not include figures for the center's funding or budget.

StarVista, the lead nonprofit in the collaboration that runs the center, lists an annual revenue of $12 million on its Form 990.

In April, the Pride center was informed that its state funding had been approved for two years. At the time, Putkey wrote in an email that the funding amount is $1.55 million, which includes $700,000 a year for services and $150,000 for evaluation and development of a replicable tool.

First opened in 2017, the center serves the queer community of San Mateo County by offering drop-in and case management services, a "free store" of necessary goods including hygiene and gender-affirming items, a library, and a computer lab, among other things. The center made news in 2018 when it received a $90,000 three-year grant from Kaiser Permanente to offer help with mental illness stigma experienced by LGBTQ people.