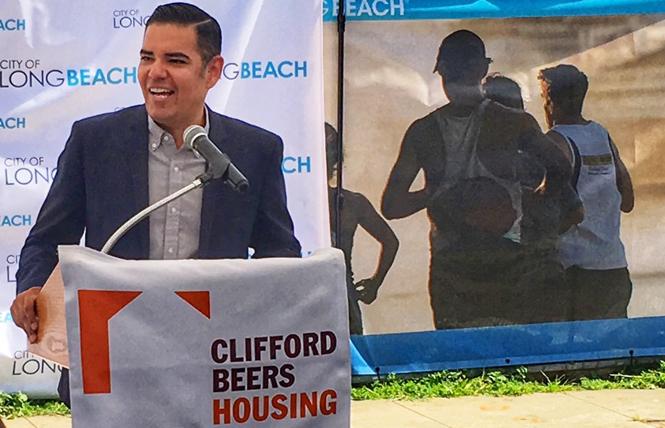 Having grown up in the East Bay city of Fremont, Antone Sylvia spent most of his early 20s living in San Francisco. A gay man and business analyst for Wells Fargo, he dreamed of owning his own home.

Priced out of the city's sky-high housing market, however, Sylvia decided to relocate to southern California four years ago. He transferred with his company and rented a place in Orange County until purchasing a three-bedroom condo for $425,000 in downtown Long Beach in 2017.

Located along the coast in Los Angeles County, Long Beach has a population of 467,354, according to 2018 estimates from the U.S. Census Bureau, making it the state's seventh most populous city. In 2012 the city adopted a development plan to guide growth in its downtown core near the beach, calling for 5,000 new residential units to be built by 2035.

As of last year 1,787 new homes either had been approved or were under construction, with 367 already completed. Another 1,276 were pending approval, according to a summary on the progress of the downtown plan.

One project supported by the plan was a reimagining of a public parklet downtown that Long Beach had named in honor of the late gay San Francisco supervisor Harvey Milk, the first out LGBT person elected to public office in California only to be killed 11 months into his first term in November 1978.

Officially known as Harvey Milk Promenade Park and Equality Plaza, the 500 square foot piazza located at 185 East Third Street reopened in May 2018. Just around the corner from it, at 330 Pine Avenue, is the drag restaurant Hamburger Mary's, which relocated in 2013 to become the first gay bar in the city's downtown.

Its doing so helped usher in other businesses to the area and alerted its LGBT clientele to the transformation that was taking shape downtown, gay Long Beach Mayor Robert Garcia told the Bay Area Reporter during an interview Easter morning. Seated at an outdoor table in a dining patio built in front of the eatery, Garcia was there to help kick off the city's annual drag Easter Walk through the streets of downtown.

"I think Long Beach is a great place for anybody to move to. But especially, I think, for LGBTQ people. Its got one of the largest LGBTQ populations, per capita, anywhere in the U.S.," said Garcia, 41, who became the first gay person elected to Long Beach's City Council in 2009 and then its first gay elected mayor in 2014.

Garcia and his husband live downtown, and he said that the majority of people in his building are gay. Apart from offering an urban style of living, downtown Long Beach is the terminus for the regional Metro subway system's Blue Line, offering a direct connection to downtown Los Angeles. (The line has been undergoing an update requiring bus shuttles for passengers along certain segments and is expected to be back to full operation this fall.)

"It's also been a progressive city for a long time. And it's also affordable," said Garcia as for why his hometown attracts LGBT residents. "And so you know, I wish it was as affordable today as maybe it was, you know, 30 or 40 years ago, but it's an affordable city and so I think a lot of people came here and moved here because of that." 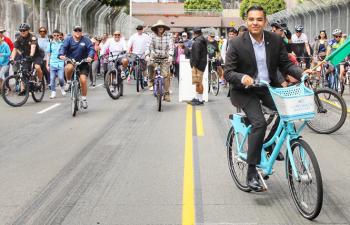 As mayor, Garcia said he has advocated for more housing development in Long Beach in order to maintain its reputation as being relatively affordable compared to other areas of the state. According to the real estate website Zillow, the city's median home price is now at $595,400, an increase of 2.2% from last year.

The average rent in Long Beach is now at $2,295, though the company noted that it is lower than the Los Angeles-Long Beach-Anaheim Metro median rent of $3,200. Nonetheless, housing costs are an ongoing issue for the city, acknowledged Garcia.

"There's been a huge housing crunch. We've built units, but we haven't built enough, and we also have not built enough affordable units," he said. "And so those are the challenges that we're facing. How do we get more affordability, and it has to be through both production and through policy."

It is a topic that Garcia has discussed with Governor Gavin Newsom, who sought the mayor's advice during his transition period following last November's election and visited Long Beach in February for a press event to highlight housing issues.

"What I think a lot of big cities are struggling with is we just have not built enough housing, especially housing that people can afford," Garcia told the B.A.R. "And so that's the big challenge in Long Beach. I think it's a big challenge everywhere."

The city also found an 8% reduction in its count of chronically homeless individuals, from 686 in 2017 to 632 in 2019. During that time the city reported more than 2,150 people had found permanent housing.

"Homelessness is a statewide crisis that impacts all of us. The data shows that Long Beach continues to make progress in housing people in need, but we must do more to get folks into permanent housing and to protect vulnerable populations," wrote Garcia in a recent Facebook post about the latest count. 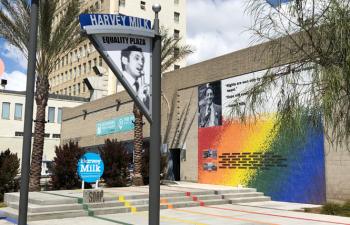 Diverse city
Over the last half century the city has become significantly more diverse, leaving behind its old nickname of "Iowa by the Sea," said Justin Ramirez, 40, a gay man who was born and raised in the city and currently works for Garcia as his deputy chief of staff. Following World War II the city experienced a housing growth spurt, he said, that brought with it discriminatory policies.

"There was a lot of redlining done in Long Beach to keep people of color from getting into most neighborhoods and getting homes," said Ramirez, who is of Mexican American heritage. "My parents were one of the few families of color in their neighborhood. The only other family of color on the block was my uncle and aunt, otherwise we had mostly white neighbors."

Today, the city is close to 43% Latino, according to the 2018 U.S. census. Following a four-year stint in San Francisco, Ramirez moved back to Long Beach in 2014. He went to work for the mayor, his friend since college, in 2017 and recently moved from the city's downtown to Los Altos, the neighborhood where he grew up, to help care for his father, who has Parkinson's.

"Long Beach will always be my home," said Ramirez.

He marveled at the changes his hometown has undergone in his lifetime, noting that when he was in college no one would think of living downtown. Today, it is a "super walkable neighborhood" he said, with a growing population.

"In the early 2000s most people looked at downtown as just a place to drive to. It was not necessarily focused on people having the work-life experience in downtown. That has shifted in the last several years," he said. "My generation and the next generation are looking for that lifestyle where we can have a high walkability score where we live."

Sylvia considers the neighborhood, and Long Beach in general, to be a smaller version of San Francisco and its LGBT community.

"Long Beach still has a small city feel," he said.

At the same time, it is developing, Sylvia noted, and dealing with gentrification and rising housing costs similar to other cities.

"I do hear concerns about people being priced out, and they are similar to what I used to hear in San Francisco," he said. "I just think that is happening everywhere in California along the coast. It is hard to avoid."

In the short time he has lived downtown, Sylvia has witnessed a number of changes to the neighborhood. Foremost, he said, has been an influx of new stores and cafes, including a smoothie joint, a gourmet chocolate shop, and a locally-owned coffeehouse.

"Shortly after I moved into downtown like five or six new small businesses opened up within a few months," he said. "I am able to walk to great stuff like I used to do in San Francisco."

While the two cities share similar characteristics, Sylvia noted that the cost of living is far less expensive in Long Beach.

"Your dollar will go a lot further, obviously," he said. "I would say Long Beach is very similar to San Francisco in a lot of ways. It has interesting neighborhoods, good food, a gay community that is a decent size and it is friendly. The weather is better and there are a lot of exciting changes happening."

Garcia told the B.A.R. that he believes Long Beach can find a balance between managing its growth in order to welcome new residents and ensuring longtime members of the community aren't priced out of their neighborhoods.

"I really think it's a city that's just growing and it's very progressive," said Garcia. "And we're just really proud of the growth and we just want to make sure that it stays a place that's accessible to everyone."