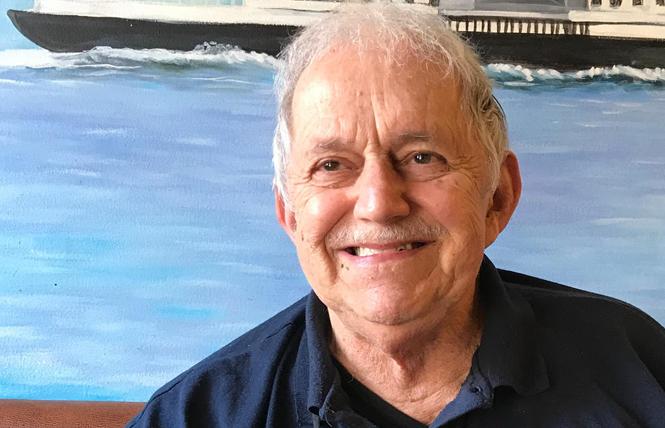 Reid Condit, a gay man who for decades supported reopening bathhouses in San Francisco, died July 10, according to the San Francisco Medical Examiner's office. He was 78.

Robert Brokl, a friend of Mr. Condit's, said that he and others stopped by Mr. Condit's residence in the Tenderloin that day to collect a Richard Caldwell Brewer painting Mr. Condit wanted them to have when they found his body.

"We made the sad discovery," Brokl wrote in an email Monday.

Over the years, Mr. Condit was a regular letter writer to the Bay Area Reporter, and was quoted in news stories concerning the closure of the bathhouses during the height of the AIDS epidemic. Mr. Condit had long advocated for the bathhouses to reopen.

The fight over bathhouse closure divided the gay community in the 1980s. At the time, public health officials and many community leaders saw the move as a way to curb transmission of the HIV virus, while those who wanted to keep them open argued that they provided an ideal setting for safer sex education.

Others, such as Mr. Condit, viewed the issue as a governmental violation of personal freedom as well as a missed opportunity for safer sex education.

Ultimately, in October 1984, the bathhouses in San Francisco were closed. The ban did not target bathing facilities per se, but rather private rooms with closed doors that could not be monitored. Mr. Condit became radicalized once the bathhouses closed, according to an obituary provided by friends.

"Although over a decade ago the efforts of Community for Sexual Privacy were largely successful in obtaining endorsement for ending the ban on privacy in sex clubs — the ban that keeps traditional gay bathhouses closed — then-Health Director Dr. Mitch Katz quashed any reopening by rejecting the vote of the HIV Prevention Planning Council to end the privacy ban," Mr. Condit wrote in a 2012 letter to the editor. "It is absurd that 21 years after the court order that banned privacy in gay bathhouses has expired, aging gay men, or any of San Francisco's gay or bisexual men for that matter, should have to travel to Berkeley or San Jose to visit a bathhouse."

According to friends, he campaigned to reopen the baths every day of his life to the end.

Mr. Condit was raised in Whittier, California. He received a Bachelor of Arts in English from Stanford University in 1962. During his time at Stanford, he studied in Germany, which he said was his most significant experience at the university.

According to the obituary, he learned Serbo-Croatian in Monterey and in the U.S. Army he was assigned to spy on the Russians. He always respected the security of the effort, never telling where he was stationed or what he learned, his friends said.

Released from the Army, he remained in Europe for a year.

Upon returning to California, he studied architecture at UC Berkeley. He was there for the People's Park demonstration of 1969 and wouldn't leave, even though he was breathing tear gas, his friends said.

Mr. Condit went on to become a specifications writer at the firm of Esherick, Homsey, Dodge, and Davis, also known as EHDD Architecture.

He and a former partner bought a house on Mars Street.

Mr. Condit fell on hard times, lost his money and possessions, and moved into assisted living at 666 Ellis Street, his friends said.

During the rise in gay liberation, Mr. Condit was active in the parade planning committee, as the San Francisco LGBT Pride Celebration Committee was known, and in successive years worked in the beer booths at the Pride celebration.

"As a gadfly, his fervor was mitigated by a generous heart and open mind," his friends wrote. "Reid never met a person he didn't like. He became a leader in his assisted housing building. Articulate and informed, he never missed an opportunity to attend a lecture or an opera, his great love and why he could never abandon his adopted city."