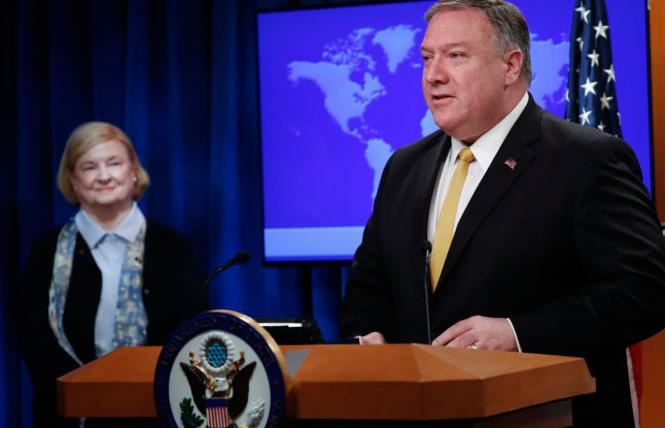 Secretary of State Mike Pompeo, right, unveils the creation of the Commission on Unalienable Rights, headed by Mary Ann Glendon, left, during an announcement at the U.S. State Department in Washington. Photo: Pablo Martinez Monsivais/AP

GLAAD President and CEO Sarah Kate Ellis called the commission a "farce," in a statement in response to the July 8 announcement.

"This 'Commission' is a farce and further illustrates the bold-faced anti-LGBTQ agenda of this administration," said Ellis. "The Trump administration is knowingly appointing activists who have made careers out of fighting against LGBTQ progress and is now providing them an opportunity to export their anti-LGBTQ activism around the world through the U.S. State Department."

Pompeo announced the Commission on Unalienable Rights hours after United Nations High Commissioner for Human Rights Michelle Bachelet expressed "shock" and condemned the U.S. for its treatment of migrant children at the Mexican border in a statement from Geneva.

The Trump administration has increasingly been called out by foreign governments and human rights organizations for violating human rights, particularly for women, LGBTs, and immigrants.

During a news conference, Pompeo derided the state of human rights more than 70 years after the 1948 U.N. Declaration of Human Rights and said "gross violations continue throughout the world, sometimes even in the name of human rights."

He claimed that institutions designed to protect human rights have drifted from their original purpose.

"Every once in a while, we need to step back and reflect seriously on where we are, where we've been, and whether we're headed in the right direction," Pompeo said. "The time is right for an informed review of the role of human rights in American foreign policy."

"Thank you, especially, for giving a priority to human rights at this moment when basic human rights are being misunderstood by many, manipulated by many, and ignored by the world's worst human rights violators," said Glendon at the conference.

Glendon was the former ambassador to the Vatican during the George W. Bush administration. Pompeo was her research assistant while he was a law student at Harvard. A conservative, she is a prominent anti-abortion advocate. She was instrumental in keeping abortion from being listed as a human right at the 1995 U.N. World Conference on Women in Beijing.

The commission's goal is to review and refine the agency's definition of human rights and to ensure it is grounded in the "nation's founding principles" and the human rights declaration.

According to the Washington Post, the commission will operate independently, in addition to the department's Bureau of Democracy, Human Rights, and Labor. The bureau already works on human rights within the State Department. The bureau will not oversee the panel, but will be tapped to provide input.

An unidentified State Department official told the Post that the commission will not discuss abortion or same-sex marriage.

In a June 12 letter, Menendez and other Democratic senators cited major problems with Pompeo's formation of the commission in a letter to the secretary of state.

Their concerns built upon those expressed by human rights advocates in May when the creation of the commission was announced in the Federal Register.

Terms such as "natural law" and "natural rights" — used by conservatives against more progressive positions on abortion and LGBT rights — mentioned in the announcement raised red flags for human rights advocates.

Daniel Philpott, a University of Notre Dame professor, who was on the short list for a seat on the commission, defined the terms to the Post.

The position is the opposite of former Secretary of State Hillary Clinton's 2011 proclamation to the U.N. in Geneva, "Gay rights are human rights, and human rights are gay rights."

A day after the senators' letter was sent to Pompeo, Congresswoman Nita M. Lowey (D-New York) amended H.R. 2740 to block any funding for the commission. The bill is currently in the Senate.

Baatour is president of Association Shams, Tunisia's leading LGBT advocacy group. He added his name to the ballot for Tunisia's November 10 presidential election and made the announcement June 25 in a Facebook post.

The 48-year-old lawyer is head of the small opposition Liberal Party.

"After long years in the fight for minority right, I have understood that no one can do the job better than me," he said, reported Pink News.

Baatour pledged to uphold a progressive and modern platform for Tunisia, from fighting corruption to abolishing Article 230, the North African country's anti-sodomy law.

Currently, homosexuality is illegal in the country. LGBT people face up to three years in jail. Authorities often enforce the law.

According to a recent survey by Arab Barometer for the BBC only 7% of citizens consider homosexuality acceptable, reported Reuters. Last year, convictions for same-sex relations rose by 60% to 127 from 79 in 2017, according to Association Shams. It recorded more than 25 convictions in the first quarter of 2019.

"Tunisia needs a democratic program that can include the different identities, cultures, beliefs and languages of this country. Our program aims to democratize power, strengthen the Parliament and give more weight to local institutions," Baatour wrote in his Facebook post.

Baatour's bid for the presidency would make him the first openly gay president in the Arab world, but he faces a steep climb.

Last month, the court struck down the anti-sodomy law that punished consensual sexual relations between men.

"I am of the view that the high court erred in arriving at this conclusion and thus, I have decided to note an appeal with the court of appeal," said Keetshabe, reported the Guardian.
Keetshabe didn't provide any other details about his grounds for appeal.

"It says to LGBTIs [that] the state, through its lawyers (attorney general), affirms the homophobic and transphobic laws. It says that the LGBTIs lives should be determined by the majority, which is wrong," Caine Youngman, the policy and legal advocacy manager of Lesbians, Gays and Bisexuals of Botswana, told KFGO.

Botswana became the sixth African nation to decriminalize homosexuality last month. If the appeal is successful experts say it will be a blow to both Botswana and Africa.