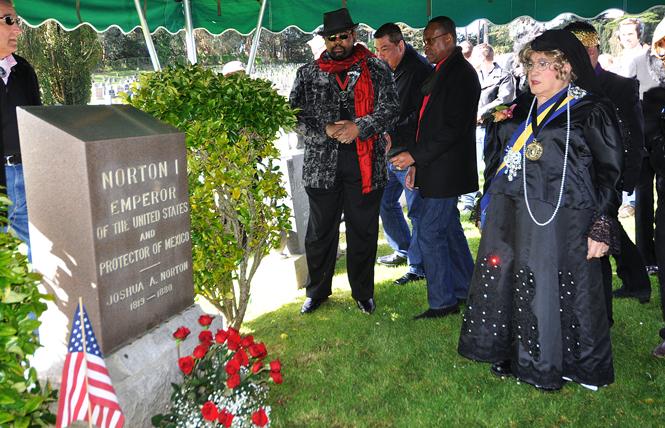 Jose Sarria, the Widow Norton, visited the grave of the Emperor Joshua Norton, at Woodlawn Cemetery in Colma, during her annual pilgrimage to the gravesite in 2011. Photo: Rick Gerharter

Jose Sarria, who died in 2013, has been called the "Rosa Parks of the gay rights movement" of the 1960s. His history is important and now there's an effort underway to induct him posthumously into the California Hall of Fame.

In 1961, Sarria declared himself a candidate for the San Francisco Board of Supervisors. Remember that at the time he had to find registered voters to sign the petition allowing him to run, and he was running as an openly gay man. The day before the deadline, city officials realized that they had fewer applicants than open positions, which would have guaranteed Sarria a win. The city bosses kicked into gear and had a near-record 34 candidates on the ballot a day later. Sarria ran his campaign from the Black Cat bar and spent many a speech talking to the gay community about accepting the power they had if they worked together. Even though he lost that November, placing ninth of almost 30 candidates and garnering about 6,000 votes, it is recognized as the beginning of the gay community showing its personal and political clout. As Sarria said, "From that day on nobody ran for anything in San Francisco without knocking on the door of the gay community."

In 1977 the first openly gay man to win an election in California, Harvey Milk, was elected to that same position.

Sarria became Empress I almost by accident. He left the Army in 1947 and returned to his beloved San Francisco intent on becoming a teacher. He enrolled in college and was eventually hired as a part-time cocktail waiter at the Black Cat bar when one of the waiters called in sick.

A short time later, Sarria was arrested in a police entrapment sting — he was using the restroom at a local hotel that the police claimed was notorious for homosexual activity. His attorney urged him to plead guilty so that his name would not be in the paper and he did, also paying a small fine. It was only later that he was told the plea also meant that he could never become a teacher. With that, his lifetime goal was crushed.

One weekend Sarria was invited to be in a female impersonator contest at Pearls in Oakland — the winner got a two-week stint at $50 per week. He won and found both the money and the attention enjoyable. The win gave him some notoriety and, as important, earned him a few small singing jobs — another life passion. That singing came in handy a few months later when, working as a waiter at the Black Cat one night he recognized the tune being played by the pianist as part of the opera "Carmen" and started singing along. Sarria was an instant hit, and as the popularity (and tips) grew Sarria and the pianist decided to plan the music and even do special shows that featured the music. "The Nightingale of Montgomery Street" was born. Soon his abbreviated operas (45 minutes to an hour instead of three, one character instead of 20) were running two shows every weekend to packed houses — drawing more business (and tips) and ever-increasing law enforcement attention. Sarria ended every show reminding the patrons to be open and honest about who they are, quit living double lives and allowing persecution. He then followed with a rousing "sing-along" chorus of "God Save Us Nelly Queens" to the tune of "God Save the Queen."

The police were attempting to shut any bar that attracted gay patrons, including the Black Cat. While the California Supreme Court eventually decided that a bar could not be closed "due to the clients it attracted," the police and liquor authority harassment continued for another decade and a half — eventually closing almost half of the city's gay bars. Drag performers and the trans community received special enforcement, with the police storming bars and arresting everyone in sight. At one point the arrests were averaging 400 per week, despite police assurances that it had nothing to do with the $50 bail and $50 fine that all were required to pay for their "lewd behaviors" such as holding hands, kissing or even (gasp) wearing clothes that were "inappropriate for their gender." As Sarria saw more and more discrimination he got angrier and angrier — and started to lead the patrons out into the street to sing the closing song to the men who were in the city jail directly across the street. Sarria and other unofficial community leaders finally started to encourage the men not to plead guilty. As more men pleaded not guilty the result was a huge backlog in the court, and the court started requiring that police provide proof of the alleged behavior. Hundreds of cases were dismissed.

One favored harassment technique, employed especially on Halloween after midnight, was to arrest drag queens under an old city ordinance that made it illegal for a man to dress in women's clothing with the "intent to deceive." Sarria countered this tactic by distributing labels to his fellow drag queens (hand-made, in the shape of a black cat's head) that read, "I am a boy." If confronted, the queen would simply display the tag to prove that there was no intent to deceive. Sarria's actions helped bring an end to Halloween police raids.

The SF Tavern Guild was an association of gay bar owners and liquor wholesalers that formed in 1962 in San Francisco, California. The Guild formed in response to police harassment of gay bars and gay people that had resulted in the closing of several bars.

The Guild was the first gay business association in the United States, and lasted until 1995.

In 1963, the Black Cat finally succumbed to ongoing enforcement assaults by law enforcement and the powerful (and anti-gay) Alcohol Beverage Association. For the next two years Sarria hosted the "Opera" at the Backstage on Bay Street and entertained brunches at Salinas Parlour until his election at the Halloween 1964 Beaux Arts Ball as queen. A few months later, Sarria declared that he was already a queen and named himself Her Royal Majesty, Empress de San Francisco, Jose I The Widow Norton. This 1965 date is accepted as the start of the Court of San Francisco and the International Court System as an entity. Sarria, known as Empress I of the Americas, later added "Protector of the United States and Mexico."

It is important to note that several groups were already in existence on the West Coast that had balls and queens. They were social organizations, and as Sarria saw the political and organizational potential he worked with those groups to craft a loose union of the groups. It was with the agreement of groups in Portland, Vancouver British Columbia, Seattle, and other cities that Sarria was affirmed the Queen Mother and the Court of San Francisco given its place as the Mother Court.

Known for her theatrical performances, fancy dinners and fun outings, by the time Sarria completed her year as empress he had established himself as the leader of a fun and dedicated group of volunteers. Other cities expressed interest in similar "Royal" organizations and Sarria began blessing other groups who promised to remain charitable, have fun, and obey any and all of her royal proclamations.

To submit a letter in support of Sarria's induction, write to Governor Gavin Newsom, California State Capitol, Suite 1173, Sacramento, CA 95814. Nicole Ramirez, who was elected an empress of the Imperial Court in 1973 and currently holds the title of Queen Mother I of the Americas, Canada, United States, and Mexico, asked that people also email a copy of their letter directly to him at nicolemrsd1@gmail.com.

Nathan Page is working to induct Jose Sarria into the California Hall of Fame.

Updated, 7/12/19: This op-ed piece was updated to include the correct date of Jose Sarria's discharge from the Army. It was 1947.