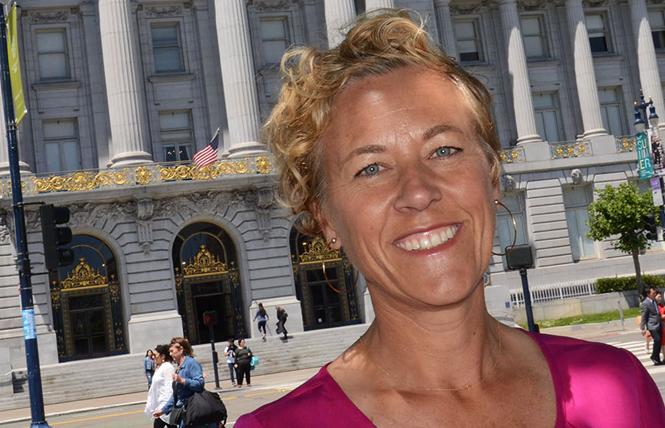 Thanks to funding secured by gay former District 8 supervisor Jeff Sheehy, there is a new safety coordinator for the area.

In a June 11 newsletter, gay current District 8 Supervisor Rafael Mandelman's office announced the appointment of Jessica Closson to the position of San Francisco Police Department community liaison for District 8. The email described her position as "focused on crime prevention and safety" with the responsibility to "facilitate communication and collaboration among D8 residents and businesses, the police department, and the District 8 supervisor's office."

Closson, a 48-year-old straight ally, spoke to the Bay Area Reporter via email to clarify this general description of her position, and to express her eagerness to serve the community in District 8.

With previous job experience listed on her LinkedIn profile as being in film licensing and web development, Closson cited her longtime residence in the community as her primary qualification for this job.

"I've lived in District 8 for over nine years. It's a special district (I may be biased!) with caring neighbors, a strong business community, and character-filled neighborhoods like the Castro, Noe Valley, Duboce Triangle, the Mission, and Glen Park."

Closson, who is a civilian employee of SFPD, said there were several reasons the position was created. She described an interfacing role, connecting the citizens to various departments.

"My position sits within the community engagement division of the SFPD, but is unique in scope in that I'm spending the majority of my time, at least for now, in Supervisor Mandelman's office," she wrote. "Being physically there, I'm able to quickly understand the issues facing neighbors and businesses in the community, consult with his staff, and reach out to various departments for assistance."

The newly-named safety supervisor went on to discuss her plans to attend monthly community meetings for three SFPD stations: Mission, Park, and Ingleside. Closson also plans to be "very visible in the community, attending business groups' and neighborhood groups' meetings, projecting a positive and helpful outlook, and helping out our community in the areas of crime prevention and safety," she wrote.

Commander David Lazar, head of the community engagement division of the SFPD, spoke with the B.A.R by phone about his hopes for this new position.

"The goal is to have someone working for the police department and organizing the community. It's hard to say whether or not it should be expanded. [Former District 8 Supervisor] Sheehy asked the police department to add this position, and it took a couple of years to get this going. He thought it would be good to have somebody who could work closely with both him and the department," Lazar said. "It's someone who can represent the department to the community. We're looking forward to seeing the results of this position. It's the first of its kind."

Sheehy did not respond to a request for comment.

When asked about her position's responsibility to coordinate efforts and share information between Mandelman's office, the health department, SFPD, the district attorney's office, and neighborhood groups on ongoing issues, especially the problems facing the homeless, Closson admitted that there is hard work ahead.

"It is a daunting list, but I've always been civic-minded, I'm passionate about our community, and excited for the impactful opportunity the role affords," she wrote.

That list includes serious issues facing Mission Dolores Park, such as reported gang activity, drug use, struggles to keep the park clean, and a shooting earlier this year. Closson said there was no meeting set to discuss plans yet, citing tight timelines and budgets this time of year.

"Dolores Park is such an amazing resource for our city — as evidenced by the crowds on any given sunny weekend," she wrote. "Unfortunately that occasionally includes gang activity, and it appears that the recent shooting in the park was gang-related. Mission station's Captain [Gaetano] Caltagirone had stepped-up police presence in the park that weekend, and as soon as shots were fired officers were on scene within one minute.

"In addition to those very rare serious incidents, we are struggling with a more everyday challenge of folks on the perimeter of the park, maybe unsheltered, sometimes blocking the sidewalks, using illegal drugs across from the front doors of Mission High School, and exhibiting other troubling behavior," Closson added. "I'd like to see an increase in resources being offered in the district to help these individuals, whether that takes the form of HOT-Homeless Outreach Team, or Street Health Teams with behavioral health clinicians."

Closson confirmed that funding for her position was first allocated in response to car break-ins in Noe Valley and rising discontent in the area. She acknowledged that the hiring process was itself quite slow.

"It took almost six months from the time I first expressed interest in the role to hiring — there are understandably a ton of background checks to be done to work for the SFPD."

Mandelman spoke with the B.A.R. by phone about the task ahead for Closson.

"District 8 has a lot of public safety needs, and a lot of opportunities for constructive community engagement," he said. "There's certainly a lot for her to deal with: homelessness, crime, even a shooting. This is a little bit of a pilot for the department. They can see how it works in District 8 and maybe try it out in other parts of the city."

Closson's yearly salary is $78,208. The position of District 8 safety supervisor is funded for a year and does not include an assistant or any additional staff.