Jock Talk: Time to pay up 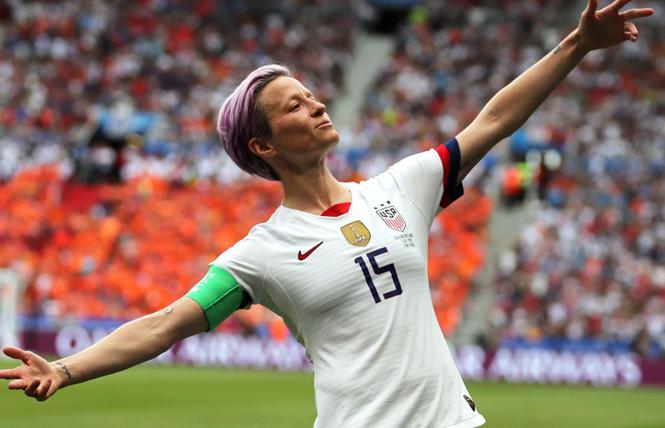 Now that the women's World Cup is over and the United States has successfully defended its title, please tell me you weren't one of the pearl-clutching ninnies who was so distraught a month ago when the American women were exuberantly celebrating every goal they scored in their 13-0 beatdown of Thailand that you had to go on Facebook to mark yourself "safe from USWNT celebration."

Sure, I'm a dead serious guy whether I am playing, coaching, or watching sports, and I dislike big celebration productions. I've never booed anyone while I was in the stands and I've never publicly celebrated with my athletes or teammates while a contest is still going on. I always take the teams I coach to a secluded area after a tournament and there we grieve, analyze, or celebrate among ourselves. What we don't do is try to upstage or humiliate an opponent.

But that's just me. We have routinely seen elite male athletes make celebratory fools of themselves during games with pantomimes, props, and choreography that are anything but spontaneous. The fans of those athletes applaud the antics, their opponents condemn them as unsportsmanlike jerks, and television cameras capture every bit of it as part of the total entertainment package.

But never have we seen such a negative reaction from so many people. And not just from chauvinistic get-off-the-lawners: former women's team goalkeeper Hope Solo, who publicly called the Swedish team "a bunch of cowards" after the U.S. lost in the 2016 Rio Olympics, criticized the American squad last month on national television, saying the world's best team should show more class and "it was unnecessary to have planned-out goal celebrations."

Kimberly Hadley is a women's soccer official, a sports officer for the Federation of Gay Games, a Canadian — and a good friend of mine. I thought her comments regarding the US-Thailand match were spot on.

"Men aren't normally criticized for poor behavior," Hadley said. "Women always seem to be held at a higher standard — and we always have to work harder to prove our worth. Over-celebratory antics were unnecessary, but I will say that if it were a men's World Cup match, the reaction from most would have been different."

And perhaps the fact that there were so many out lesbians playing in the tournament, especially on the American squad, made some culturally squeamish sorts über sensitive to what they thought was unladylike behavior. The U.S. team alone had a lesbian coach (Jillian Ellis) and at least five lesbian players: Tierna Davidson, Adrianna Franch, Ashlyn Harris, Ali Krieger, and Megan Rapinoe.

Viewed in a vacuum, the "optics," as talking heads say these days, did look bad. Bad enough the team ran up the score, critics said, they should not have rubbed salt in the wounds with all the yahooing.

Taken in context, however, all that scoring and all that yahooing makes more sense.

First, they weren't running up the score. That's a concept from sports such as football and basketball, where there are no limits on substitutions and scoring differentials matter only to gamblers. In soccer, most starters must remain on the field for the entire game and scoring differentials are used at the end of round-robin play to determine seedings for the elimination matches. It was the opening match not just for the United States, which would face a particularly stiff challenge from nemesis Sweden; but for Thailand, which as far as anyone knew at that point might lose every match by more than a dozen points. So especially early in a tournament, when you don't know how much will be needed later, you grab as much as you can when you can.

Second, any unsportsmanlike spirit of those celebrations pales compared with what happens in other (men's) sports. Ever watch news conferences from boxing, pro wrestling or ultimate fighting championships? No one gripes about that; indeed, they tune in their televisions to hear the sound bites. Again, it's entertainment.

Which brings us to our third point: the match was pretty unentertaining after the first few minutes, the outcome a foregone conclusion. Think about baseball, when there's a long rain delay, or the late innings of a blowout game. In both cases, the networks don't want viewers at home to be saying, "Siri, turn on 'Judge Judy.'" So the announcers start talking about what some guy in the stands is scarfing down and getting all over his shirt, or about the time Babe Ruth flew fighter planes during the Revolutionary War. Anything to distract from the lack of drama in the game.

Essentially that's just what the American players did. They provided a distraction that provoked discussion and kept viewers engaged. Not just for that game, but for the rest of the series when many tuned in to see what further malfeasance the team would do or when it would get its comeuppance from a better team. This was the most watched women's World Cup ever, and more Americans were exposed to more coverage of it than ever before. I'd say that's worth a bit of hot-dogging.

So instead of twisting ourselves into knots because a group of great female athletes celebrated pretty much the way groups of great male athletes do, why don't we think about some of the things that really are problematic in the world of soccer. (And no, they have nothing to do with White House invitations, whether they are made or snubbed.)

Sexism runs throughout the sports world, but nowhere is it more blindingly obvious than in soccer. Teams and countries pay women players a fraction of what they pay their men, spend a hella lot more promoting men's teams than women's teams, then use that enhanced market awareness as the justification for giving more money to the men. International organizers have never made the men's team play World Cup matches on artificial turf, which causes more injuries than natural grass, but has thought nothing in the past of making the women make do with the harder surface.

That's the context in which the women were celebrating — the overcoming of every barrier, prejudice, and slight to excel on the biggest global stage. The chance to strike a symbolic blow for every little girl on a soccer field nursing a ball and a dream.

"If anyone can convince a national program that they're worth equal pay, the USA women's team can," Hadley said. "I've never been a huge fan of the U.S. women's team because I feel they have a certain level of 'something' that I don't particularly care for, but I'll tell you one thing: I love how they play as a team, how they finish, how they play end-to-end, and how they are standing up for the women's game globally. Equal pay for women athletes: it shouldn't even be a conversation anymore."