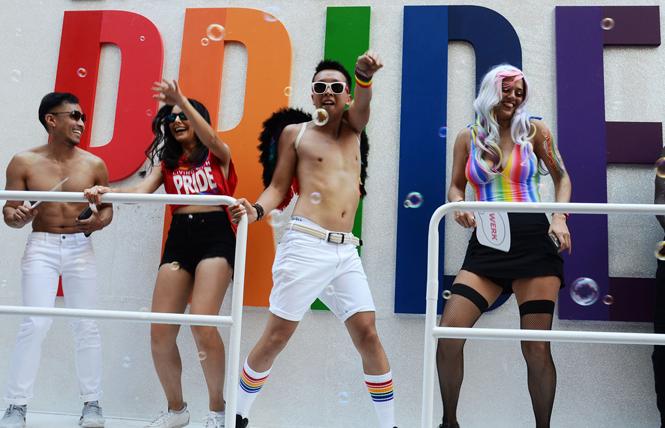 The 49th annual San Francisco Pride parade went off with a hitch Sunday, as a protest delayed the mammoth spectacle for about an hour. [See related story.]

But other than that, the June 30 event mostly proceeded as expected, with over 250 contingents taking part under the theme "Generations of Resistance." The crowd was estimated at more than 100,000, according to San Francisco Pride's website.

It began, as it has for years, with the deep rumble of motorcycles.

"I'm hoping for a nice, safe ride," Kate Brown, president of Dykes on Bikes, said shortly before the parade began.

Dykes on Bikes led the parade with its procession of hundreds of riders and their motorcycles.

"It's really important that we're out here honoring and remembering the work of the generations that came before us," Smith added. "When I ride down this street, I'm so excited to see everybody and I'm thinking about the work that lays in front of us. That's what I'd like to see here today."

Kris Hayashi, the executive director of the Transgender Law Center, the largest national trans-led civil rights organization and one of the parade's contingents, felt this year's theme was especially pertinent given that Pride weekend fell close to the 50th anniversary of the Stonewall rebellion, which took place June 28, 1969 in New York City. The riots, led by bar patrons and others fighting against repressive police harassment, are viewed by many as the birth of the modern gay rights movement. 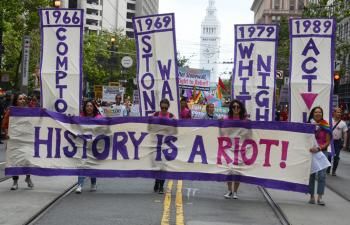 Resistance groups at the front of San Francisco's Pride parade point to the history of the LGBTQ movement. Photo: Rick Gerharter

"This is the anniversary of Stonewall," Hayashi said prior to the start of the parade, "which was a protest against police brutality. Trans people, especially black and brown trans people, are still facing the violence of police brutality. I think, particularly in this moment, when trans communities and so many other communities are under attack, Pride needs to be about resistance, about fighting back, and for standing up for communities who are vulnerable in this moment."

Hayashi said broader awareness of trans issues was part of the message TLC hoped to convey to paradegoers.

"For TLC to march today," Hayashi said, "is really to raise up the visibility for the ways in which trans communities are still under attack. There have been so many murders of black trans women over the past month alone, and for us, Pride is about saying that Stonewall is now, particularly for the trans community."

At least 11 black trans women have been murdered in the U.S. so far this year, according to media reports.

Lin Campbell and her family drove from Santa Rosa to march with PFLAG-SF, a chapter of the national LGBT family and ally organization.

"I've been marching in the parade for 25 years," Campbell said. "It just keeps getting better and better, bigger and bigger. Today, I'm marching for my trans grandson."

Throngs of people gathered along Market Street to watch the parade. Marcus Fromley, 27, said he came to the parade to experience a sense of community. 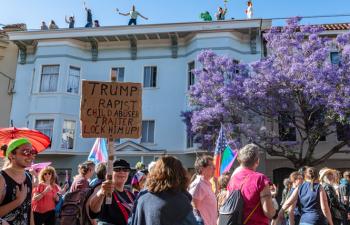 "I live in a small town outside Sacramento," Fromley said, "and people aren't very accepting there. I'm gay, so when I come to things like this, I'm reminded just how many people are out there supporting people like me. It gets really emotional for me."

This year's parade also made history: it was the first time a sitting California governor marched in a Pride parade in the state. Governor Gavin Newsom drew a big response from the crowd. He has long participated in the parade as lieutenant governor, San Francisco mayor, and a city supervisor.

California Senator Kamala Harris, a Democratic presidential candidate, rode in a car with her husband, Douglas Emhoff. Behind the wheel was Kris Perry, who was joined by her spouse, Sandra Stier. Harris married the two women in San Francisco City Hall in 2013, hours after the U.S. Supreme Court tossed out Proposition 8, the state's same-sex marriage ban.

Bay Area supporters of gay Democratic presidential candidate Pete Buttigieg also had a contingent in the parade. Buttigieg, who was endorsed by the national LGBTQ Victory Fund last Friday in Brooklyn, had returned to South Bend, Indiana, where he is mayor, because of fallout from an officer-involved shooting last month in which a black man was killed.