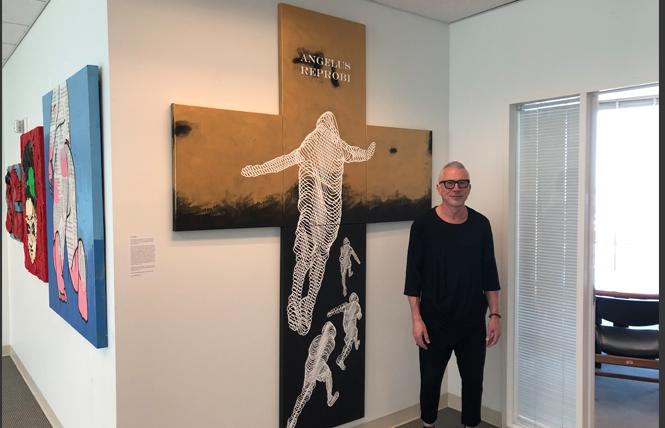 To celebrate Pride in 2017 gay Democratic state Senator Scott Wiener decided to display the artwork of Joseph Abbati in his San Francisco office. His 14th floor suite in the State Building on Golden Gate Avenue overlooks the city's Civic Center area where the annual LGBT festival takes place the last weekend of June.

Abbati, 62, who is queer and lives with his partner, Andres Maiorama, in San Francisco, installed his tapestries featuring local drag queens. Wiener spokesman Victor Ruiz-Cornejo had seen them exhibited for a show at Strut, the men's health center in the Castro operated by the San Francisco AIDS Foundation, and recommended them to his boss.

Following the Pride parade that year, Wiener hosted an opening party with Abbati. Impressed by the experience of working with the lawmaker and his staff, Abbati suggested to Wiener "why not bring more artists in, as you have this great space."

That sparked a collaboration between the artist and the lawmaker, who has given Abbati curatorial oversight of his district office to mount seven art shows and counting.

"It is a huge office so there is a lot of wall space. I thought it was a great idea," said Wiener, who also hosted art shows in his City Hall office when he served on the Board of Supervisors. "Joseph has been great. He creates a theme and selects local artists and their artwork based on that theme."

The themes regularly tie into Wiener's legislative work and have centered on such issues as housing, the environment, and nightlife. There is no budget set aside to mount the shows, other than funds to pay for refreshments at the opening events, and Abbati volunteers his time. The artwork is not listed for sale at the shows, though attendees are given information for the artists so they can contact them directly.

"They don't get an opportunity to show their work with people who are like-minded," Abbati said of many of the artists selected for the shows, particularly those featured in the Pride Month exhibits. "It is great to show our work in the queer community and to show our work at Pride."

In addition to giving a platform to local artists, Wiener sees the shows as a way to connect with his constituents.

"What I like about having it in a government office, particularly in the State Building, is most people have never been in their state senator's office," said Wiener. "The fact we have several hundred people come in every few months for an art show is a wonderful way to connect people in the community to their representative."

The title for this month's Pride exhibit, "Queer Eyes," was inspired by the Netflix show where a quintet of out advisers provide makeovers to style-challenged men and women.

"It is something very current," said Abbati, and refers to "the different way our community is involved in the arts. We have a wide range of experience in art."

It is also the biggest Pride show yet. It features 70 works by 32 artists as well as a live performance at the June 30 opening party by the Hayward-born dancer SNJV (pronounced SUN-JEEV), 32, who has a video installation in the show.

His work is derived from being a gay man of color in drag, born to immigrant parents of Indian and Fijian descent who met in the Bay Area. The title of his piece, "Phool," is a play on the English word fool but also a direct reference to the Hindi word for flower and the floral garlands worn by Indian brides and grooms.

"I play the fool, not only a silly individual but a flower blossomed and withered away, nourished to grow again," he said. "It is a story about how life is beautiful so enjoy it while it lasts." 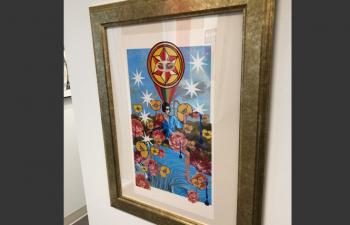 Oakland resident Cassie Castrejon, 28, who identifies as trans nonbinary, has three paintings in the exhibit that speak to the self-hate and gender dysphoria they experienced growing up. It is the first time Castrejon has shown their art in the Bay Area since moving from Seattle three years ago.

"I hope it is a starting point for getting involved in other ways in the art community in the city directly or indirectly," said Castrejon. "I haven't been involved in an art show since I moved here. I didn't find an in here because it is such a big art community."

"The pieces I entered for the show are very PG compared to the rest of the deck, I would say," said Ragus. "Because of the content of my work, I try to be the most sex positive as I can. I think that is really important."

While attending the Academy of Art in San Francisco, she turned to tarot to help her work out some personal issues. When she posted her first tarot cards she made on social media, the positive response led her to devote three years toward creating the full deck.
"I am really proud of it; it is my baby," said Ragus, who hails from the small Central Valley farm town Le Grand near Merced.

Because some of the cards feature nude photomontages, Ragus has found it difficult to find a printing company willing to reproduce them. Five she approached turned her down, including one in Oakland, though she believes she has now found one willing to work with her.

"I want to make it OK if you are not a certain way to have different likes," she said. "And being sex-positive, a lot of humans have trouble with facing that."

Because the art is being shown in a government building, the Pride exhibit comes with a warning that it contains sexually explicit works. Abbati purposefully grouped the more X-rated pieces together in smaller conference rooms within Wiener's suite so the doors can easily be closed if needed.

According to Wiener and his staff, no one has ever complained about any of the artwork shown over the years. Just one of the risqué pieces in this year's Pride exhibit was taken down earlier this month when a meeting was held in the room where it was installed.

"I had it hidden, tucked under my shoulder like a surfboard. They didn't ask me about any of the pieces," said Castrejon. "The security guards were super chill about it. They were only demanding that I take my shoes off because they were setting off the sensors."

The paradox of having a nude portrait hanging in the office of a lawmaker whose last name is a slang term for male genitalia is rather amusing, admitted Castrejon.

"I have a big wiener piece in Scott Wiener's office in a government building. That is really funny to me," said Castrejon.

Ragus said she was also surprised to be invited to take part in the exhibit due to the nature of her art and the location of the show. She appreciates the opportunity to have her artwork be seen by people who otherwise may never encounter it.

"It is cool to kind of get to meet all these other artists who might be feeling the same way, I guess," she said. "We are all getting showcased in a world we don't always get seen in."

The exhibit opening takes place from noon to 3 p.m. Sunday, June 30, in Suite #14800, 455 Golden Gate Avenue. Those interested in attending must register online at https://bit.ly/2Yoe21e.