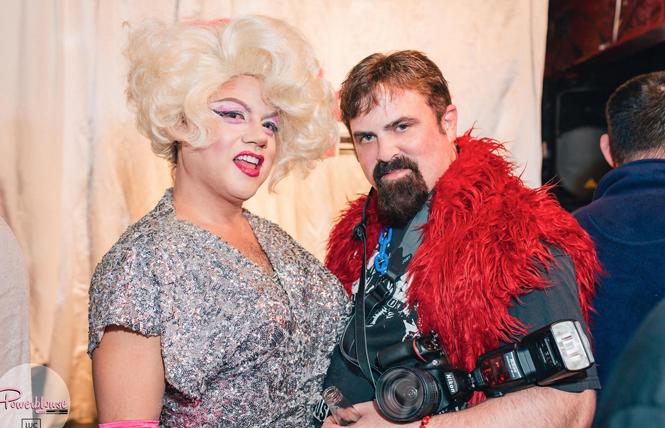 For the past two years the producers of the LGBT news show GNews have faced censorship issues with YouTube, the original online home of their show, and now they've launched a new website.

Called Glitter Bomb TV, the site will serve as the online home not only for GNews, but also for the other programs the producers had been making for YouTube, which is owned by Google.

Knight told the Bay Area Reporter that once the show is flagged, the ability to advertise the show is blocked, making it nearly impossible to reach their target LGBT audience.

"Which is basically censorship, based on us being members of the LGBTQ+ community," Knight said in an interview.

A Google spokeswoman wrote in an email, "We have long-standing policies that govern the kinds of ads we allow on our platform, and we review ads from our LGBTQ+ advertisers against the same standards as all other advertisers. We always encourage advertisers to appeal if they feel an ad was disapproved by mistake."

Knight and Dulay began streaming GNews on Facebook as an alternative to YouTube. This went well for about six months, until Facebook began blocking them from promoting content that was deemed "political or of national importance."

"We went through an exhaustive and detailed process with Facebook in order to run ads for content they deem political (the Equality Act) or of national importance (the Colorado baker who refuses to sell wedding cakes to same-sex couples)," said Dulay.

"In terms of Facebook, there is not an easy way to speak to a live human being," said Dulay. "It's all automated online and advertisers interact with Facebook's Ads team via digital channels only. On a related matter, Facebook-owned Instagram recently deleted our Instagram account, and we've been unsuccessful in getting a good explanation for that. We recently simply gave up on trying to get that account reactivated."

Knight added that this turn of events "pissed them off." They said that in the current political environment, with President Donald Trump trying to chip away at LGBT rights, the anger they felt has given them the courage to stand up and fight.

"But we are still reliant on their platform to engage with our audiences," he wrote in an email to the B.A.R. "We have boosted events a few times this year with a limited budget. These events were fairly innocuous, certainly not sexual or in any way political, but they were queer, of course. The fact that they were approved may have to do with our own selection of events that would be more likely to be approved, but last year they would have been rejected out of hand."

Beswick said the historical society decided not to register with Facebook as a "political organization" since it's mainly an educational and cultural organization.

"We still have problems with the structure of the platform and the way it is administered, but due to its monopoly status and our community's investment in it, it will be difficult for us to separate until something else comes along," Beswick added.

GNews, hosted by Dulay and co-starring a revolving lineup of co-hosts, will continue to feature a variety of topics of interest to the global LGBTQ+ community, including Hollywood, pop culture, music, celebrities, politics, news, plus local and international events.

Coming soon to the Glitter Bomb TV lineup will be GSpot, a show that will focus on hot spots for the LGBTQ community in the Bay Area and beyond. And finally, Glitter Bomb TV offers GPost, a page that offers Knight's written opinion pieces on a variety of LGBTQ-related topics. The site also includes a community resource page.

"The big bonus of doing this is that we are now raw, uncut, and uncensored," said Dulay. "We can say whatever we like and not be at the mercy of the vague, unfair policies of tech giants on their 'free speech' platforms."

Knight and Dulay report that they've been getting some decent traffic on the new site. They've been promoting it through organic and paid social media, word of mouth, and Knight's GPost columns.

This summer they plan to sponsor and co-host a series of events to help spread the word. They'll be boosting the website through paid online ad campaigns, and choosing marketing partners to significantly increase the site's traffic. They also hope to explore distribution of their content by other LGBTQ+ news channels and websites.

"So far, the budget for Glitter Bomb TV has been out of our own pockets," said Knight. "It's been a labor of love. We've spent more than $25,000 in paid advertising over the last four years via Instagram, Facebook, and YouTube to increase views and to build an audience. We plan to at least triple our annual marketing budget during the next six months, and plan to be profitable by 2020."

Knight and Dulay feel that it's important to be out and proud in light of the Trump administration's attempts to reverse LGBT rights.

"We're losing ground and those basic rights could be rolled back during our lifetimes," said Knight. "It's incredibly important for all of us to be woke, active, vocal, and never take what we have for granted. Hope will never be silent, and we must all 'get out of the bars and into the streets' as the old rally cry goes. And also get out there to support Democrats in 2020."

Knight added that this is particularly important as LGBTQ people recall the 50th anniversary of the Stonewall riots. He pointed to a piece he wrote for GPost.

"The Stonewall riots were a pivotal moment," Knight wrote. "They served as a primary catalyst for the gay rights movement in the USA and around the world. It also sparked our annual worldwide tradition of celebrating our Pride through marches, parades, festivals, and events. Many of the major ones taking place in June to commemorate and celebrate the bravery of our brothers and sisters who stood up against the man to take back our longtime refuge, our bars, where our LGBTQ+ community can be surrounded by like-minded fellowship, dance, drink, and be 'Mary,' and most importantly, feel safe and be safer. We've got each other's backs."

To watch GNews or other shows produced by Glitter Bomb TV, visit http://glitterbombtv.com/.