Boston is rich in LGBT history 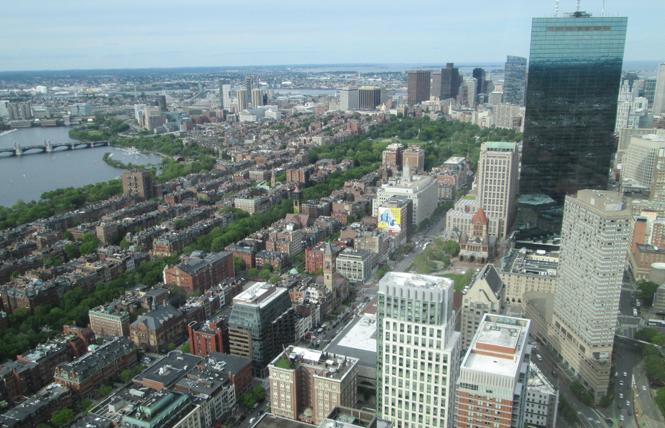 While San Francisco celebrates Pride this weekend, Boston's celebration was Saturday, June 8, with a parade starting in Copley Square, through the gay-popular South End, before ending up at Boston City Hall. The early celebration of Pride was congruent with the city's history of firsts in LGBT history, most notably as host to the nation's first same-sex marriages in 2004 when Massachusetts became the first state to allow same-sex nuptials.

But Boston's gay tolerance can be traced back before it was even a city. The Shawmut Indians, who called the area home centuries before the Europeans arrived, respected and honored the difference that LGBTs brought to their community structure. One of the most prominent entertainers in 19th century Boston was lesbian actor Charlotte Cushman, who used her wealth to commission a sculpture of education pioneer Horace Mann. Her girlfriend, Emma Stebbins, did the sculpture. The statue can be seen in front of the front lawn of the Massachusetts Statehouse.

By the early 1900s, the term "Boston Marriages" was coined as an expression used all over the country to describe a cohabitating lesbian couple. One of the more prominent women in a Boston Marriage at that time was Eleanora Sears, who was the great-great-granddaughter of Thomas Jefferson and a professional tennis player. She also became the first woman in Massachusetts to get a driver's license.

A wider gay visibility began in Boston long before same-sex marriages were legal. The city elected out lesbian Elaine Noble in 1975 as a state representative, making her the first openly gay person elected to any state legislature. She was a former speech instructor at Emerson College who had participated in a televised debate in support of gay marriage in 1974, 30 years before she would see that dream become a reality in Massachusetts.

Boston's first gay Pride parade was held in 1971 and was attended by about 300 people. According to local media, 750,000 turned out this year and the city got into the spirit early with rainbow flags displayed prominently throughout the city including a huge rainbow flag draped over the upper floors of the landmark John Hancock Building.

The sights
This time of year, many visitors to Boston also check out Provincetown, the town on the tip of Cape Cod ranked as one of the gayest towns per capita in the world. The Pilgrims landed there before Plymouth Rock and Ptown is gearing up to celebrate the 400th anniversary of the Pilgrims' visit next year. You can easily make a day trip to Provincetown from Boston on the Bay State Cruise Company's Fast Ferry (https://baystatecruisecompany.com/) that takes only 90 minutes each way from downtown Boston. If you are going by car, it's about a two-hour drive in good traffic.

Boston has been called the "Cradle of Liberty" and on just about every downtown street, you can find landmarks commemorating early U.S. history. One of its most visited historical sites is directly in front of the old Massachusetts Statehouse (https://www.bostonhistory.org/). A circle marks the spot of the 1770 Boston Massacre but, as historians are quick to point out, the incident may have been an early example of fake news. The story of the five colonists shot dead by British soldiers was spun to rally support against the British. But many, including the soldiers' defense lawyer, Founding Father John Adams, believed the soldiers acted in self-defense.

The first shots in the Revolutionary War were fired in the Boston suburb of Lexington in 1775. Support for independence was first bolstered by the propaganda surrounding the Boston Massacre combined with the backlash against the crown following King George's crackdown on the colonists after the 1773 Boston Tea Party.

One of the best ways to explore Boston without getting lost is on a guided tour. One of the best is the Old Town Trolley Tour (https://www.trolleytours.com/boston), which includes live narration and allows riders to get on and off at attractions. Buses run about every 15 minutes and the ride includes free admission to the city's wax museum as well as the Old State House; the latter attraction is absolutely not to be missed.

Boston by Foot (https://www.bostonbyfoot.org/) is a great company that uses volunteers with a passion for the city to lead walking tours past the city's most significant historical sights. The company also offers an excellent LGBT-focused tour during Pride week and groups can request the tour year-round. Tours by Foot (https://freetoursbyfoot.com/) offers excellent free tours by enthusiastic guides who work on tips. Most of the walking tours include part of the Freedom Trail (https://www.thefreedomtrail.org/), a 2.4-mile walk marked by red bricks. You can follow the trail on your own, but bring a guidebook with you that explains what to look for along the way. You can also download a free app from the National Park Service that includes stops on the Freedom Trail as well as important landmarks of the city's rich African American history (https://www.nps.gov/bost/planyourvisit/app.htm).

Boston is home to some of the country's best museums including the Boston Fine Arts Museum, the Boston Museum of Science, and the New England Aquarium. The John F. Kennedy Presidential Library and Museum is outside of downtown Boston but an easy subway ride on the red line. The museum is another not-to-be-missed attraction that features some of the best skyline views of Boston.

Another popular attraction is the Skywalk at the Prudential Center (https://www.prudentialcenter.com). When it opened in 1964, the 52-story building was the tallest in New England and one of the tallest buildings outside New York. It was bested by the mirrored-glass, 60-story John Hancock Tower (now called 300 Clarendon Street) in 1976. Admission to the skywalk includes an audio headset that gives listeners a 360-degree tour of the city. A small theater shows various short films with a good introduction to Boston. An exhibit on immigration to the city features a video argument between Irish and Italian immigrants over who had a tougher time making it in the city.

Nightlife
Most of Boston's gay nightlife is centered in the Back Bay and South End neighborhoods, which are adjacent to each other. Boston's iconic 300 Clarendon Street building is in Back Bay and the South End is just west of that.

The most popular gay bar in Boston is among the oldest and largest in the city. Club Cafe (https://www.clubcafe.com/) is in Back Bay and is a restaurant, bar, and nightclub rolled into one. It has been going strong for over three decades and always draws a crowd. Look for the stained glass window with the big letter "N" on it. It is from the long-closed legendary Napoleon Club, where notable celebrities, including Judy Garland, performed.

Speaking of legendary bars, the oldest gay bar in Boston is Jacques Cabaret (www.jacques-cabaret.com) The bar opened in 1938 and is well known for its drag shows. The bar sits a block away from a very sad chapter in Boston history, the site of the Cocoanut Grove nightclub fire that killed 492 people in 1942. A marker on a wall and sidewalk memorializes the victims on Piedmont Street and Cocoanut Grove Lane.

There are no full-time lesbian bars in Boston but for a good list of women-focused events, check out http://www.kristenporterpresents.com/.

The sports bar Trophy Room (https://trophyroomboston.com/) is a popular bar and restaurant in the South End, just a short walk from Club Cafe.

The nearby Boston Eagle is another South End institution, popular with the leather and bear crowd. You will know it by the giant iron eagle over the door.

In the Fenway district, the long-running Machine nightclub (http://www.machineboston.club) features upstairs and downstairs spaces that have various themes on different days of the week.

Eating out
Similar to San Francisco's Mission Bay neighborhood, Boston's North Station, near the TD Garden Arena, is home to new modern apartment and condominium buildings with some of the trendiest restaurants in the city. Among the best is Alcove (https://alcoveboston.com/), which serves up delicious surf and turf dishes with a beautiful view of the Zakim Bunker Hill Bridge, Boston's newest landmark that opened in 2002.

Lola 42 (https://www.lola42.com/) is another modern, trendy restaurant known for its many deciduous seafood dishes and salads. It's on the waterfront just a couple of blocks from where the high-speed ferry takes off for Provincetown.

In the heart of downtown, Bostonia Public House (https://bostoniapublichouse.com/) is deservedly very popular with the lunchtime and after-work crowd. It is known for ultra-creamy chowder, seafood, and shellfish. Be sure to order the iced donut holes for dessert.

One of Boston's most historic restaurants and bars is Carrie Nation (http://www.carrienationcocktailclub.com/). It is ironically named for a hatchet-wielding woman who was arrested a number of times in the early 1900s for smashing saloons as a protest against what she saw were the evils of drinking. Check out the backroom bar that used to be a clandestine speakeasy during Prohibition in the 1920s. And don't miss the 2 p.m. Sunday brunch with drag performers.

Accommodations
Some of the best boutique hotels are in the gay-popular South End and Back Bay neighborhoods.

The gay-owned Oasis Guesthouse and neighboring sister property, Adams Bed and Breakfast (https://www.oasisguesthouse.com/), are great options in tony Back Bay. It is also one of the more affordable options in the city, with rates as low as $99 in the slower winter months.

Another gay-owned hotel in Bay Back is luxury Clarendon Square Bed and Breakfast (https://www.clarendonsquare.com/), situated in a historic building that dates back to 1867.

If you are on a very limited budget, check into renting a room from the gay-focused short-term rental site, Misterb&b (https://www.misterbandb.com/). You can find the best deals outside of downtown, Back Bay, or South End but still an easy subway ride into town. 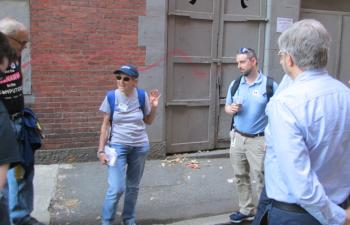 Getting there and getting around
If you're visiting Boston, don't even think of renting a car. Street parking is tough to find and garage parking is expensive. Downtown and the major attractions of the city are easily accessible by the subway system, which, by the way, is the oldest in the nation. Free shuttles from Boston Logan International Airport connect to the blue line subway stop. You can also take a free ride on the city's silver bus line to South Station, Boston's main railway station in the heart of downtown.

Boston offers a CityPass and a GoBoston pass that can be purchased ahead of time through the city's official tourism website. For a fixed fee, the passes offer free admission or discounts to a number of attractions. More information on the passes and just about everything else you need to know about visiting Boston can be found on the site, www.bostonusa.com.