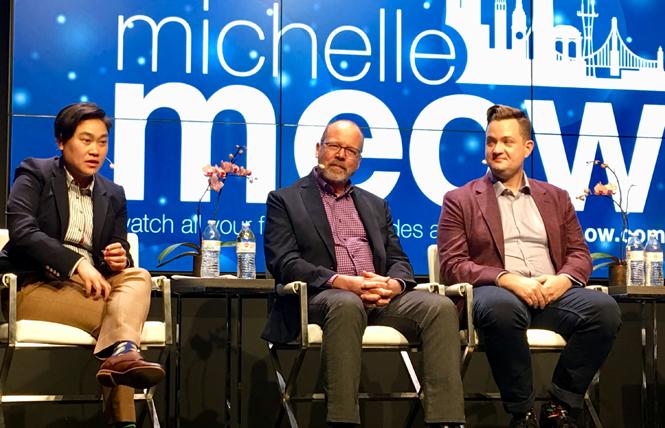 That was the message from a panel of experts discussing aging at the Commonwealth Club June 19 in San Francisco during "The Michelle Meow Show."

Tom Grothe, a gay man who's a nurse practitioner at Kaiser Permanente in South San Francisco, said it's particularly important to have an advanced health care directive to inform health care providers who should make decisions on their behalf if they are unable to do so.

"Families of choice" may be more important for many people who identify as LGBT, he said.

Karen Skultety, Ph.D., a bisexual woman who's executive director of Openhouse, said it is important to determine what services queer seniors say they need, not what well-intended program directors think they need.

Unfortunately, said Skultety, "there is no list" available to guide people toward LGBT-friendly services.

Jason Flatt, Ph.D., a gay man and assistant professor at the Institute for Health and Aging at UCSF, said that in the LGBT community there are fewer people with children and some who are also "disconnected" from their families. Flatt said it is important to have home care workers who are sensitive to the needs of LGBT people.

On Lok CEO Grace Li, a straight ally, said many people prefer to grow old in their own homes and must make plans to find appropriate services. The agency provides services for seniors, including members of the LGBT community.

"People want to stay independent as long as possible," she said.

Li also noted that caregivers of elderly patients, particularly those with dementia, also need services to prevent burnout, which is particularly common in families of Alzheimer's patients.

During the question and answer session, a gay man said he and his critically ill partner had an "unfortunate" incident at a Kaiser hospital, after staff said they needed his private room for another patient. Grothe apologized for the incident, urging people to "be assertive" with hospital staff to discuss all aspects of care. Grothe said that Kaiser has a protocol offering a palliative care consultation when critically ill patients are admitted, in an attempt to learn the patient's wishes for end-of-life care.

Audience member Sally Robertson, who described herself as a "senior dyke," told the Bay Area Reporter that she enjoyed the panel presentation.

"But it brings up more questions than answers for me," she said. "I have a lot to think about now."