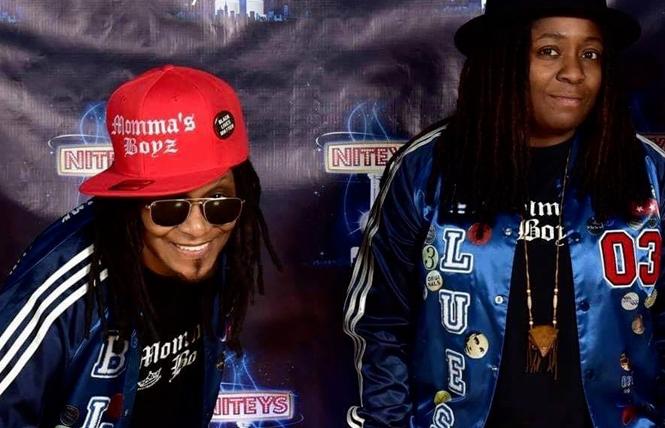 While the eyes of the nation often turn to San Francisco in June for the definitive Pride celebration, some of the people who define Pride for the city are celebrating on the East Coast this year.

2019 marks the 50th anniversary of the Stonewall riots in 1969; the turning point in queer American history when patrons of the historic bar in Greenwich Village fought back against ongoing homophobic and transphobic police harassment, searches, and raids.

A local drag king group is thrilled to be one of the contingents heading east, both to commemorate the anniversary and to connect with their antecedents.

"I want to be at Stonewall because I want to stand there and breathe it in," Kaylah Marin said in a recent phone interview. The Bay Area Reporter reached out to Marin, a queer woman and part of Momma's Boyz, a performance and musical group of drag kings of color, to ask about their plans to appear at New York Pride and celebrate the historic anniversary this year.

Marin, who has been performing with Momma's Boyz for 10 years, expressed a deep personal and cultural connection to the iconic events at Stonewall.

"I want to be there to be part of history, and to be one of many. People are using history to empower their present. I'm seeing this movement among the youth. I don't want to bog them down with all the struggle that we had," said Marin, who declined to share her age.

That tension between moving forward and honoring the past is also of particular interest to Alex U. Inn, the founder and creator of Momma's Boyz, and a queer nonbinary woman who uses they/them pronouns.

Inn expressed similar feelings about taking the group to New York to participate in the Stonewall 50th commemoration rally, as well as at Stonewall 50/World Pride. The march takes place Sunday, June 30, and will pass in front of the Stonewall Inn, which was designated a National Historic Landmark in 2000. In 2016, then-President Barack Obama announced the establishment of the Stonewall National Monument site, which is administered by the National Park Service.

"I represent a lot of different things on the president's hate spectrum," Inn said in a phone interview, referring to current President Donald Trump. "I'm queer, I'm a woman, I'm over 40, I have a disability, my skin is dark, and my hair is curly.

"I'm not allowed to feel safe in my own country, my own city," they added. "I've been called a [N-word] to my face four times in San Francisco since he took office. It's like he handed these people a blank check. He's brought them all out of hiding. So I understand why the violence of Stonewall had to exist."

Inn talked about why the Stonewall story is crucial to queer history.

"One story that many people don't know helps to explain why it's so important that people like us continue to be there. One of the first arrests at Stonewall was a drag king, and she asked the crowd 'Why aren't you doing something?' It was a rallying cry, and that's when things started to fly. It was Stormé DeLarverie, who was arrested that day. And we take our heritage from her. We're representing a rich heritage of being of African descent, butch, masculine-of-center folks. Drag kings," Inn said.

Heritage
That heritage was also the driving force behind the creation of Momma's Boyz, which Inn started back in 2004.

"At the time that we came to be, there were these other boy-bandish groups," said Inn, recalling the early-aughts drag culture in San Francisco. "I had noticed that although you could see drag queens anytime, you hardly ever saw drag kings on stage. And the ones you did see were white. There was a bunch of us that were performing individually, so we decided to form a group to get more stage time for drag kings of color.

"Back then, I could count the number of us on one hand. We worked on creating a presence, and having a group helps you make a name and associate it with performances of quality. We held fundraisers and different shows to get noticed. We did a king switch: drag queens came in male drag, we went in femme drag and sang duets. We started doing that every year, going forward," said Inn, describing the early days of the group.

Momma's Boyz evolved out of that beginning to produce something more rare: live original music performances.

"Then we asked ourselves why we were lip-synching when we could perform live," Inn said. "That brought a whole new vibe to the drag king world. We got invited to the Chicago International Drag King Extravaganza in 2004. At that time, we had five members. Right now, we have three Momma's Boyz, and up to four dancers for our shows."

Momma's Boyz has performed at the B.A.R.'s Besties readers' poll parties, where it was also recognized for best drag king group.

Sister Roma, a 56-year-old genderqueer drag queen and 32-year member of the Sisters of Perpetual Indulgence, spoke with the B.A.R about Momma's Boyz via Twitter direct message.

"I believe the first time I saw Momma's Boyz was when I was hosting the San Francisco drag king contest [2017] with my good friend and drag king Fudgie Frottage," Roma wrote. "I'd never seen a group of kings of color perform classic hip-hop hits that I've loved for years. I couldn't stop dancing and I was blown away by their talent."

Roma said that she and Inn have worked together supporting various causes.

"I know they will put on one hell of a show and represent San Francisco beautifully at World Pride," Roma added.

Momma's Boyz may sound like a small drag group by the standards of those enjoyed by big city drag queens, but the disparity in both income and notoriety between drag performers along gender lines is extreme enough to explain these numbers. When the B.A.R asked Inn about the state of drag kings in a time when "RuPaul's Drag Race" has brought the art and performance of a once-hidden subculture into America's living rooms, Inn pulled no punches.

"RuPaul decided that drag kings are worthless, and that tainted whether we get on stages. There have been attempts by drag kings to run something like 'Drag Race.' But it isn't easy. You have to play the game; you can't pretend it's not political. You have got to have your allies all lined up," Inn said.

They also talked about the privilege that is prevalent in the entertainment industry.

"Queens and Sisters as advocates are your strength. Even in drag, you need a man," Inn added, referring to the Sisters of Perpetual Indulgence. "You're dealing with men, usually white men, who always have the privilege of making the call. You need the same type of allies you need anywhere else. The ones who come off RuPaul's stage and go on to stardom, they get invited to Pride events, they start their own businesses and series, because they have that kind of privilege, power, and the limelight. We're still fighting for it."

RuPaul did not respond to a request for comment through his production company or the company that manages his events.

Inn's performance partner Marin agreed on this point, but expressed her frustration differently.

"Growing up, I was always more familiar with queens than kings. Queens have such a large presence, and such a sense of fun. Drag kings have a really large spectrum: some are fun while some are really political. Some have a statement that has to be made in this political climate. It's layered. It may take an audience that's willing to engage on those levels."

Marin performs in drag as Mailman, because she says she "always delivers."

After this trip to Stonewall, Inn hopes the future holds more acceptance for Momma's Boyz, and for all drag kings of color, who have been part of the movement since DeLarverie stirred up the crowd at Stonewall and before.

"I hope we continue for another 15 years, and that people outside the queer scene embrace us," said Inn. "But even if they don't, we are just like our new song, 'Front Line' says. In war, that front line is held by the bravest. They get taken out, and the second one takes over. What we're saying is that no matter who gets taken down, there's always someone coming up behind. This community always comes back."

Fifty years after Stonewall, drag kings are still rising up and coming back.

Updated: 6/27/19: This article was updated to include that Sister Roma is a 32-year member of the Sisters of Perpetual Indulgence.