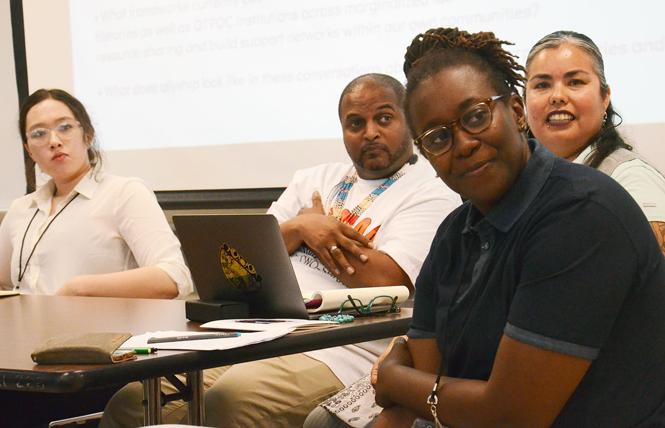 Half a century after the Stonewall riots ignited a community that had long lived in the shadows, LGBT historians from around the world gathered in San Francisco for the Queer History Conference last week.

Up to 300 historians representing academics, archivists, the National Park Service, and individuals interested in queer history met at San Francisco State University and at select venues throughout the city for the Committee on LGBT History's first national conference June 16-18. The committee is an affiliate society of the American Historical Association.

The attendance exceeded expectations of co-chairs and academics Amy Sueyoshi, Ph.D., and Nick Syrett, Ph.D. It highlighted the number of people now working in the field and on projects, and for the need for gatherings of this type.

Sueyoshi, 48, is dean of the College of Ethnic Studies at SFSU and uses they/them pronouns. Sueyoshi were particularly excited because, until recently at least, "queer history is deemed marginal" in the field and as a profession, they said.

"I'm actually quite relieved and grateful that people think that history is so compelling," said Sueyoshi, who identifies as queer. "I think in the past, as a discipline, history has been seen as something as boring and dull. The fact that we've been able to attract international attention is quite moving."

Syrett, a 44-year-old gay man who is a professor of women, gender, and sexuality studies at the University of Kansas, added, "It demonstrates the real growth of the field and that there is a really growing interest in queer history."

Others pointed out that more and more communities are beginning to appreciate their history.

"We know that people are craving this information. There are so many grassroots archives that have started and popped up around the country," Jennifer C. Gregg, the 40-something lesbian who is the executive director of the ONE Archives Foundation in Los Angeles, pointed out.

"Helping to provide them with support and then learning how we can push our history out to a broader audience is, I think, really vital," she added.

Sueyoshi was pleased by the presence of people of color at the conference while Syrett was excited about the international panel discussions.

They were both thrilled about sessions for educators.

"We have a really vibrant K-12 teacher track at the conference where social studies and history teachers in high school and middle school are learning queer history," said Syrett.

In California, education officials in 2017 approved for use a number of textbooks that included lessons on LGBT history. But, as the Bay Area Reporter noted in an article last year, the rollout of the textbooks has been slow, with few districts purchasing them. Nevertheless, LGBT history is being taught to schoolchildren throughout the state as school districts use other materials to incorporate the lessons into their curriculums. Other states are now following suit, such as New Jersey.

Sueyoshi was delighted to see the turnout of people of color, both as panelists and attendees, particularly because the university's ethnic studies department was hosting the conference.

Susy Zepeda, a 42-year-old queer Chicana lesbian, spoke on the "Reclamation & Resistance: The Making of Grassroots QTPOC Histories" panel at the conference.

"It's not surprising to me; it almost feels like it is time," she said of the conference's diversity. "I do feel like there is not a lot of people doing it and I wish that there was more.

"We've always been making queer history," she added, noting ways that people of color have recorded and passed down their stories through song and art. "There's always been stories being told."

"We have people giving papers and presentations representing all continents, with the exception of Antarctica," he said.

"We should be exposed to the reality of the diverse society that we live in," said Sueyoshi, adding that it's "not just diversity for diversity's sake."

"Think about history in terms of social justice movements and ways to empower oneself as well as histories of inequality," they said. "It's another lens which we can think about how to form a better America."

The GLBT Historical Society in San Francisco co-hosted the conference and sponsored the opening ceremony and an inside look at the society.

Historical gathering
LGBT historians expressed the importance of the conference providing a space for them to be able to come together to discuss queer history, share their ideas, see friends, and make new friends and potential project collaborators.

"It's really important for us to forge a network and create a community where we can all feel supported and valued and have an exchange of ideas," said Sueyoshi, pointing out that many queer historians don't feel recognized or valued at their universities for their work. "That's super important to me."

Andrew Jolivétte, Ph.D., a 44-year-old gay author and professor at SFSU, was also a panelist for the "Reclamation & Resistance" discussion. For him, the conference was about seeing friends and meeting new colleagues in the field and to "really learn more about people's work and what they are doing and eventually collaborating with people."

"I think that [if] we have more spaces like this to come together, it helps with networking, advice, tips, strategies, [and] building communities to do more of this type of work," he said.

Sueyoshi hoped that the conference, which cost about $8,000 to produce, fulfilled its mission to "build both community as well as stimulate inquiry."

Syrett anticipated that there will be more queer history conferences, either organized by the committee or other organizations. He and Sueyoshi said that the committee was already discussing plans for the next gathering.

"There is more and more demand for queer history in middle and high schools, but also at colleges and universities," Syrett said, noting that more graduate students' dissertations are focused on queer history. "As the field grows there's just going to be more and more people interested in attending conferences like this one."