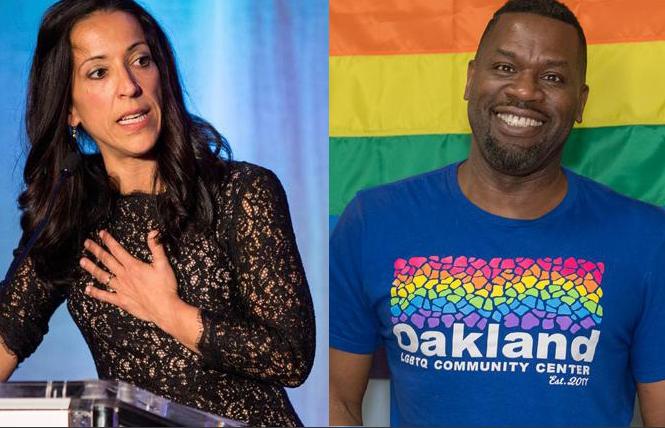 The recent Oakland City Council budget meeting seems to have resolved little in terms of restoring funding to LGBTQ organizations — our email this week to Mayor Libby Schaaf's office seeking clarification on exactly how much money is in her two-year budget plan for queer groups has not been answered. City Council President Rebecca Kaplan told us Tuesday that she has proposed a $200,000 grant for Our Family Coalition and $500,000 for LGBT+ homeless youth support. The city's final budget has not yet been approved.

But the unfortunate fallout of the June 10 meeting has been a series of open letters between Joe Hawkins, executive director of the Oakland LGBTQ Community Center, and Renata Moreira, the outgoing executive director of Our Family Coalition. Hawkins accuses Moreira of misrepresenting that OFC is the "only" LGBTQ organization providing services to families in Oakland. Moreira responded that what she said at the council meeting was that "OFC is the only LGBTQ family organization in California exclusively dedicated to serving LGBTQ-headed families for over 20 years." Video from the meeting shows Moreira saying exactly that.

We are saddened that two great queer East Bay leaders of color are squabbling over which agency provides the most services. The fact is that Oakland lags far behind San Francisco in funding for LGBTQ nonprofits. Both OFC and the LGBTQ center need city resources, and it's a shame that Schaaf and Kaplan, a lesbian herself, have engaged in their own public budget spat to the point that the needs of queer residents are being ignored.

Hawkins and Jeff Myers founded the Oakland center two years ago because they grew frustrated that the city lacked a community space. City Hall talk about support for a community center went nowhere, and the Oakland Pride organization, for which Hawkins used to volunteer, never made enough money to set aside a portion for the project, as it had long planned. Today, the center provides space for 12-step meetings and also offers support groups for queer youth, parents of color, parents of LGBTQ kids, elders, and rents office space onsite to LGBT therapists. In one of his letters, Hawkins noted that the center established a partnership with Children's Fairyland to host drag queen/king storytime and negotiated subsidized or no-cost entry for low-income queer families at the historic Lake Merritt attraction.

OFC, of course, is the older, more established organization. It offers support groups and playgroups for families, resources for educators, and workshops and trainings. It is fighting for grants and other revenue sources just like the center.

Moreira wrote in one of her responses to Hawkins that the two have met several times and OFC "wished very much to create a collaborative relationship" with the community center from its inception. For a variety of reasons, that hasn't materialized beyond good intentions. Hawkins wrote that the two haven't met in years. Hawkins maintains that OFC staff made misleading statements at the meeting; Moreira says they didn't. Whatever was or wasn't said, it's imperative that the organizations' leaders meet in person to overcome their disagreements. Hawkins and Moreira both seemed open to that. We hope they live up to that commitment.

After all, if the city of Oakland is intent on short-changing LGBTQ agencies, as seems to be the case with this latest budget brouhaha, nonprofits will need to work together to help provide as many services as possible to a population that city leaders seem intent on neglecting.