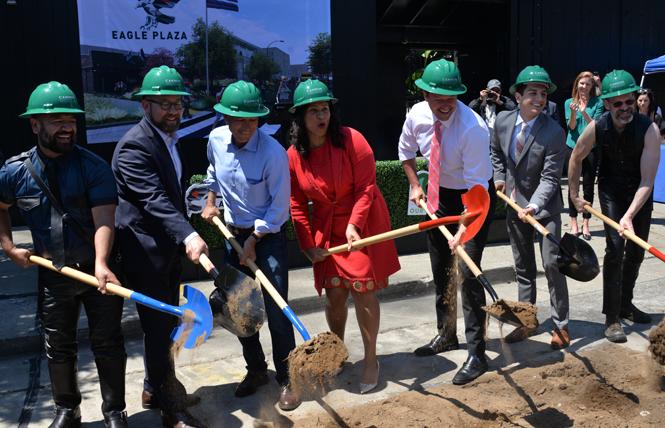 Six years after the owners of the Eagle bar first raised the idea of building a leather-themed plaza, city officials and LGBT community leaders gathered Tuesday, June 18, to break ground on the $1.85 million project. It is the world's first public parklet dedicated to the leather community.

While construction of the outdoor space in front of the gay bar on 12th Street won't be complete until December, at the earliest, the plan is for a new flagpole to be erected in time to raise a leather flag Sunday, September 22, to kick off the city's Leather Week ahead of the annual Folsom Street Fair, taking place this year September 29.

"This is a special day for everybody, not only for me," said Alex Montiel, an owner of the Eagle Tavern who is a member of the Friends of Eagle Plaza group supporting the project. "What makes it so special is we will have a permanent public recognition for the community. We have always been here and now we have a monument for our diversity."

Beth Bicoastal, 37, the events coordinator for the Eagle who worked as its manager when it reopened in 2013, noted the community has spent years trying to get the plaza off the ground.

"It is a way to preserve the leather cultural district's history in SOMA," said Bicoastal, who lives nearby the site on Dore Alley.

Montiel, 47, who started wearing leather 21 years ago, dedicated the groundbreaking ceremony to Mike Leon, who bought the Eagle bar with him and died unexpectedly in May. The business partners had discussed the idea of a leather plaza when they first met with local development firm Build Inc. about the housing project it had proposed across the street from the bar on what had been a gated parking lot.

The San Francisco-based firm agreed to pay for the majority of the parklet as a condition for securing approval of its housing development. Under construction since last year, 136-unit rental housing project cannot open to residents until the Eagle Plaza is built.

"People think of us as developers, we are really urban place-makers," said Loring Sagan, a co-founder of the company. "This is amazing for us. Let's dig dirt and make it happen."

Using one of the shovels with blades sporting the red, blue, or black colors of the leather flag was Mayor London Breed. She had stepped in earlier this year to cut through the city's bureaucratic red tape that had delayed final sign off on the project for two years.

"That was just really unacceptable," said Breed, who announced she was working with gay District 8 Supervisor Rafael Mandelman to secure $50,000 in the city's budget for the plaza friends group.

It had already raised $80,000 toward a goal of $150,000 to pay for furniture and other decorative elements of the plaza. The friends group will help activate and oversee the plaza when it opens later this year.

"I am proud to live in a city that considers the leather communities enough of a vital part of San Francisco to honor us with an official public gathering place," said B.A.R. leather columnist Race Bannon, who is a member of the plaza friends group.

Place Lab, started by Build and now part of the nonprofit San Francisco Parks Alliance, oversaw the design of, and permits for, Eagle Plaza. It will be approximately 12,500 square feet in size and reimagine the block of 12th Street between Harrison and Bernice streets. Sidewalks at both entrances into the plaza will sport the colors of the leather flag.

"Years ago we were worried if there would even be an Eagle bar," noted Mandelman. "Not only is the Eagle still here but now we have not only the Eagle but this amazing plaza here."

District 6 Supervisor Matt Haney, who represents the South of Market neighborhood at City Hall, noted that not only is the Eagle Plaza the first to honor the leather and LGBT communities, but it is also located in the first-ever leather-focused cultural district.
"There is no West SOMA without the leather community," he said.

Bob Goldfarb, chair of the leather district, said the community is thrilled to have the plaza be a focal part of it.

"We look forward to having it as a gathering place in our district," he said.