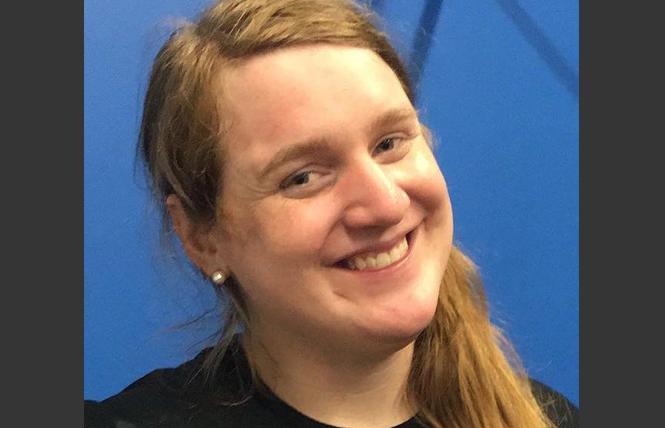 Transgender individuals increasingly are gaining recognition of their rights through non-discrimination protections in nearly every part of life. In most forward-thinking states — states that follow the spirit of the phrase "individual rights" to include all people, not just those in power — transgender people have anti-discrimination protection in housing, employment, and access to public accommodations.

And then you have sports at the elite or professional level — the Land that Laws Sometimes Forget.

Well, maybe not forget. Maybe just indulge transgressions with a wink and a nod, a tax break here and there, a culture of bend-over-backwardness that would win any limbo contest ever staged.

When it comes to transgender people competing in sports, policies are frequently advertised as being inclusive that are anything but. To defend such policies of exclusion, terms such as "unfair advantage," "even playing fields," "slippery slope," "integrity of women's sports," and "testosterone levels" are bandied about as being sacred principles not to be challenged or examined. Teams of scientists offer contradicting opinions and in the cloud of doubt, some athletes are locked out.

The latest battle in this decades-long war is happening in Minnesota, where Gender Justice and JayCee Cooper, a transgender female powerlifter, last week filed a gender discrimination complaint with the Minnesota Department of Human Rights against USA Powerlifting, saying its recently adopted policy banning the participation of transgender athletes, either men or women, violates her right to compete in women's powerlifting.

"As a powerlifter and a transgender person, I'm no stranger to a challenge," Cooper said. "I've jumped through all the hoops, trying to meet USA Powerlifting's arbitrary and subjective standards, just to have them respond with an outright ban on transgender women in competitions. At some point you have to say enough is enough. Trans rights are human rights. Trans athletes are supported in our right to compete by the International Olympic Committee, the International Powerlifting Federation's executive committee, federal and Minnesota state law. USA Powerlifting's blanket ban violates not just the law, but the very spirit of sports."

USAPL, which said this week it had not yet seen the complaint, responded with a release stating it does not ban transgender athletes, but added several qualifiers it said enabled the participation of those athletes.

"To allow those born and who went through puberty as males to compete as females would be inherently discriminatory against a federally protected class: women," the release alleges. "Further, allowing transgender males to use androgens when no other category of athlete is allowed them represents an unfair advantage and against the founding principles of USA Powerlifting. Accordingly, transgender women are allowed to compete in the division reflecting their birth, and transgender men may compete without androgens."

"Under the Minnesota Human Rights Act, discrimination against anyone based on their gender identity is illegal. This includes in public accommodations, and in Minnesota, organizations such as USA Powerlifting," she wrote. "I urge you to reconsider this discriminatory, unscientific policy and follow the example of the International Olympic Committee. The myth that trans women have a 'direct competitive advantage' is not supported by medical science, and it continues to stoke fear and violence against one of the most at-risk communities in the world."

Sports organizations such as USA Powerlifting answer to multiple institutions. Two of the biggest ones in this case are the government of Minnesota (the state in which the organization is headquartered); and, indirectly, the International Olympic Committee (USAPL is an affiliate of International Powerlifting Federation, which in turn is a member of the IOC).

The Minnesota Human Rights Act bars discrimination on the basis of sex or sexual orientation in public accommodations, employment, and business, among other areas. It does not explicitly mention gender identity, but courts have generally found sex discrimination protections to cover discrimination against transgender people.

Once the Minnesota Department of Human Rights reads and accepts a complaint, the parties are asked to go to mediation. If that fails or either party declines mediation, the department investigates the complaint, then either dismisses it or works with both parties to come to conciliation. If that fails, the state attorney general's office can pursue the case if the state finds the complaint is warranted. Otherwise, the complainant is left to pursue the matter in court.

The IOC has a checkered, often embarrassing, past when it comes to regulation of usage of both performance enhancing drugs (PEDs) and women's sports. For years it had a blind eye when it came to athletes doping; when it did start going after drug abusers, it was often behind the scientific curve in detecting the way dopers were cheating on their tests. Until recent years, women's sports in the Olympic Games were greatly restricted in the physical challenges they were allowed to face or the number of entrants they could have, and there were invasive gender determination examinations when some women did not exude the kind of femininity officials expected.

The IOC
When the IOC passed policy guidelines in 2016 saying transgender men and women should be included in sports, even if they have not undergone therapy, there was much jubilation among transgender advocacy groups and their supporters. A closer look at that transgender policy, however, reveals a ton of exceptions that can still lock transgender athletes out.

First off, the IOC has said all along that the guidelines are not rules, and that sports governing bodies should consider the guidelines when establishing their own transgender inclusion rules.

"I don't think many federations have rules on defining eligibility of transgender individuals," IOC medical director Dr. Richard Budgett said when the guidelines were announced. "This should give them the confidence and stimulus to put these rules in place."

Secondly, the IOC set a limit on how high testosterone levels can be for an entire year before any competition and throughout the competition. But it also said governing bodies must still abide by drug-use rules set by the World Anti-Doping Agency, which handles anti-doping policies for Olympic sports.

Now, WADA is many things, but progressive and inclusive are not adjectives that spring to mind when reviewing its policies. It has always given short shrift to HIV-infected athletes — for example, it would not grant therapeutic use exemptions, or TUEs, for facial wasting because it considers that a psychological issue, not a medical necessity — and about the best that can be said for its awareness on trans issues is that it stopped referring to transgender individuals as "transsexuals" less than a decade ago.

The toothlessness of the IOC guidelines and the strictest of interpretations of WADA rules gave USA Powerlifting the cover it sought to kick out all transgender athletes, male or female.

Originally, USA Powerlifting was named the American Drug Free Powerlifting Association. It may have rebranded itself, but it remains married to its hardline anti-drug roots, which by definition focus more on exclusion than inclusion. The organization admits as much in the introduction to its ironically named "Transgender Inclusion Policy," when it begins, "USA Powerlifting is an inclusive organization," but continues, "for all athletes and members who comply with its rules, policies, procedures, and bylaws. USA Powerlifting is not a fit for every athlete and for every medical condition or situation."

The organization bars transgender women lifters with a double whammy. Some drugs transgender women may take as part of their medical treatments are not exempted; and USA Powerlifting says trans women have unfair physical advantages developed in adolescence. They base that claim on a report submitted by its own committee on TUEs.

None of them are experts on gender dysphoria, but their report does cite a lot of other reports, including a review of the before-and-after performance results of one transgender female lifter and a study that looked at the post-injection effects of steroids on mice.

"The assertion of gender choice, although legal to change in parts of the world, does not erase the dimorphic differences of sex, formalized at birth and continually developing throughout the lifespan, that have direct implications to performance advantages," the report asserts. "Our policy on transgender participation was borne from the fact that the requisite 12 months of androgen blockade, regardless of resultant testosterone levels, does not come close to reversing the effects of having been born into the male sex when measuring the effect on powerlifting total."

Now here's the funny thing about the papers cited in the USA Powerlifting report: they include not a single dissenting paper, not a single study suggesting transgender women athletes do not have an overwhelming and inescapable advantage.

Of course, such scientific reports abound, reports that conclude no significant competitive advantage exists for transgender women, but they are not cited in the report. There are no interviews conducted with transgender lifters about what participation in the sport means to them in their lives, to their well-being. When "normal" testosterone levels are discussed, transgender individuals and individuals with differences in sexual development are excluded, in effect basing all reference points in a way that pre-excludes many women to justify their exclusion. There is no mention that sometimes naturally occurring testosterone intolerance negates the benefits of higher testosterone levels. Issues such as bigger bodies (which exclusionists cite as one of the advantages transgender women have) requiring more oxygen (but transgender women have lessened capacities to supply once they are on hormone suppressants) are not discussed.

"Rather than creating a transgender participation policy, USAPL chose to create an exclusion policy by banning transgender women from competing altogether," said Jess Braverman, legal director for Gender Justice. "USAPL created a policy rooted in bias, fear and misinformation — and out of step with the core values of sports, such as inclusion and basic fairness. There are many threats to women's sports, but equality and inclusion are not among them."

"If a young person transitions from male to female prior to puberty, as in the case of some transgender people, no accommodation is necessary at all and this student should be treated as any other competitor in girls' or women's sports," the foundation wrote. "Additionally, if a transgender student transitions after puberty, medical experts increasingly agree that the effects of taking female hormones negate any strength and muscular advantage that testosterone may have provided and places a male-to-female transgender athlete who has completed her transition in the same general range of strength and performance exhibited by non-transgender females who are competing. A female-to-male transgender athlete has no physical advantage before, during or after transition and should be permitted to participate fully on male sports teams."

But the current scientific evidence regarding transgender sports performance is shaky or incomplete at best regardless of which way it points. For example, when I asked WSF what was the scientific evidence supporting its statement that transgender women have no physical advantage, I was directed to a 1996 paper that examined post-transition chemical levels in transgender men and women. (And yes, in 1996 that paper referred to "transsexuals.")

But the study groups were not made up of athletes; they were not people for whom exercise is an integral part of life. There were no performance comparisons made, just chemical ones.

Given that scientific evidence for and against trans inclusion is mixed, inconclusive and occasionally self-contradictory, and often just flat out faulty, it would seem inadequate to adopt an exclusionary stand just to banish arbitrarily a small pocket of the population.

For now, we live in a world of unsettled science. And even if there were solid statistical proof of on average an advantage — so what? No athlete is ever guaranteed a medal, so it makes sense to give everyone a shot.

USA Powerlifting has a strict anti-doping history it is seeking to protect, even if it means denying some athletes a chance to compete.