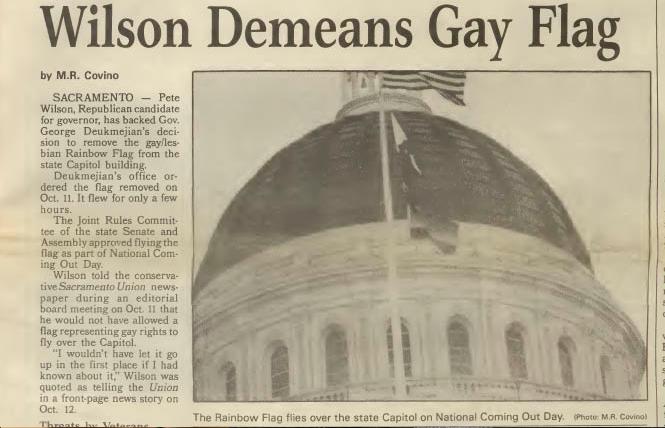 Asked about seeing not only Newsom, but Wisconsin Governor Tony Evers and gay Colorado Governor Jared Polis fly the Pride flag at their state Capitols for the first time this year in honor of Pride month, Bosia replied he was surprised it hadn't happen sooner.
"To be honest, I am surprised that it has taken this long for the second raising of the flag. But now it is much easier in some ways," wrote Bosia, an associate professor of political science at Saint Michael's College. "Imagine how dark 1990 was, and how much anger, after nearly a decade of AIDS, the Bush administration, the 1990 AIDS Conference in San Francisco, the failure of Prop S, state and local budget cuts. We really needed something that gave us hope, and that's why we did it." 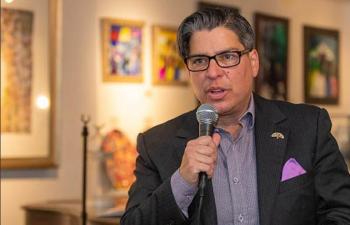 Their nuptials made headlines in the Bay Area when Kaplan announced Rosin had accepted her marriage proposal via a Facebook post in May 2014. Their divorce appears to have gone unreported, as the B.A.R. first learned about it over the weekend in a brief emailed note from Rosin, an Oakland-based associate marriage and family therapist who works with couples and individuals. 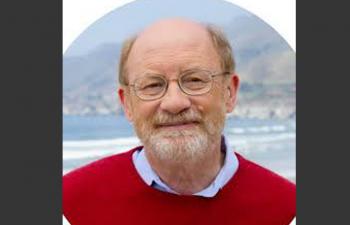 BAYMEC, the Bay Area Municipal Elections Committee, announced its support for Laird in a June 14 email. He is running to succeed Senator Bill Monning (D-Carmel), who is termed out of office next year.

The Senate seat includes Santa Cruz and San Luis Obispo counties, the coastal areas of Monterey County, and southern Santa Clara County. Laird was one of the first two out gay men elected to the state Assembly in 2002.

He ran unsuccessfully for state Senate in 2010 and went on to serve in the administration of former Governor Jerry Brown as California's secretary for natural resources from January 2011 until the beginning of this year.

To date the only other person to pull papers for the Senate race next year is Republican Neil Kitchens. The Prunedale horse ranch owner ran unsuccessfully last year for state Assembly.

CA lawmakers fund LGBT projects
State lawmakers included more than $3.7 million in funding for various LGBT projects in the budget they sent to Governor Gavin Newsom last week. Once he signs it, the funding will become final.

Three of the Legislative LGBTQ Caucus' funding asks survived the budget negotiations between the state Senate and Assembly. Most significantly, they allocated the $2 million sought by organizers of the International AIDS Conference being co-hosted by San Francisco and Oakland next summer.

Also included in the budget is $500,000 for the national LGBT arts center being built by the San Francisco Gay Men's Chorus and $175,000 for the GLBT Historical Society in San Francisco, according to gay state Senator Scott Wiener (D-San Francisco), who chairs the LGBTQ affinity group for legislators.

(The caucus had also sought several million dollars to pay for LGBT cultural competency training for public school teachers. Since legislation requiring the training is still pending, it was not added to this year's budget.)

Wiener also secured $1 million for the proposed revamp of Harvey Milk Plaza above the Castro Muni Station. The controversial project is estimated to cost at least $11 million, which a community group has pledged to raise as it seeks city approval.

And Wiener secured $100,000 for the Eagle Plaza, a leather-themed public parklet in San Francisco's South of Market neighborhood that broke ground Tuesday. The funding would go toward the estimated $1.85 million price tag for the project.

Web Extra: For more queer political news, be sure to check http://www.ebar.com Monday mornings for Political Notes, the notebook's online companion. This week's column reported on all five Napa County cities agreeing to fly the Pride flag for the first time this June.