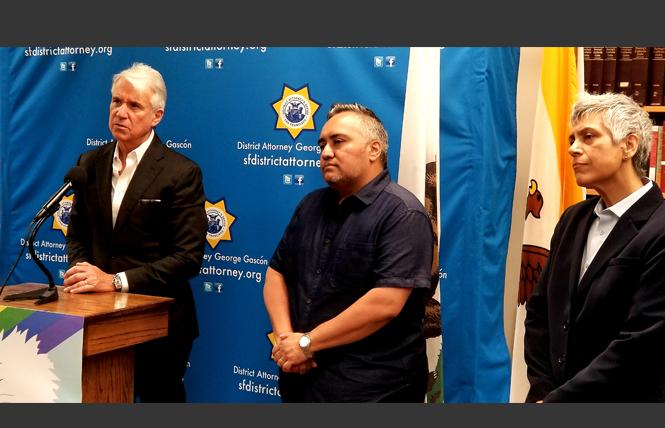 The theme of San Francisco's Pride celebration this year is "Generations of Resistance," referencing the history of the movement toward queer liberation, the 50th anniversary of the Stonewall riots, as well as the generations to follow.

Despite the community's veneration of, and debt toward, its elders, the San Francisco District Attorney's office would like to remind people that folks aging in place in San Francisco are uniquely vulnerable and in need of support.

At a news conference Friday, June 14, outgoing San Francisco District Attorney George Gascón announced the launch of a public education campaign focusing on safety protections for marginalized and vulnerable older members of the queer community. Representatives of the office's victim services division, Community United Against Violence, and Openhouse joined him to kick off this program on World Elder Abuse Awareness Day.

"Members of the LGBTQ community feel isolated by the prejudice and the biases they have faced. They grew up — not to say that we're perfect today — but when they were growing up, things were really, really bad. They may be hesitant to come forward when they're suffering abuse. They often fear law enforcement, because of the history of law enforcement and the LGBT community," Gascón said.

Pablo Espinoza, co-executive director of CUAV, pointed out that this unique vulnerability stems from the way previous generations of LGBTQ people have been isolated.

"Also, a lot of older LGBTQ folks might not have a lot of family," he said. "Many of these folks are completely estranged from their family. So there aren't those other intimate connections with other people who would normally be checking in on them.

Espinoza added that many LGBTQs rely on friends.

"So, if you're friends with an elder, it's important that you do check in on them, that you do ask questions," he said. "Especially if there's a new relationship, or someone new in their life. Be curious."

Gena Castro Rodriguez, PsyD., chief of the DA's victim services division, pointed out that LGBT seniors are statistically more likely to live alone and have less family support and connection to services, making them vulnerable to becoming crime victims.

"It is important for us to have responsive and effective services to provide connection, support and resources in times of need," she said.

"Social connections keep us healthy. A lot of older folks feel invisible, even within the LGBT community," Vargas said. "I hear that from people in the Castro. Historically, we as a people have had to be very self-reliant. So it can be easy to say 'no, I don't need help.' Sometimes it's good just to have another set of eyes. That's what we do with our Friendly Visitor program, just to look in on a community member and act as a gatekeeper.

Gascón was asked about Brian Egg, a 65-year-old gay man and victim of homicide whose decomposed torso was found in a fish tank in his South of Market home last summer. Gascón declined to comment, as the investigation into Egg's death is ongoing.

Silva, 40, had previously been convicted in 2015 for stealing money from the retirement accounts of employees who worked for an upholstery company he once owned in Emeryville. Silva had been held on an Alameda County parole violation at Santa Rita Jail in Dublin. He was released in April.

According to the DA's office, posters for the new campaign are being placed in elder care facilities and community centers, letting people know what services are available for older LGBTQ people in San Francisco. This campaign intends to connect people to victim services, CUAV, and Openhouse, depending on their type and level of need.

The Bay Area Reporter asked Gascón whether this program was part of the legacy he hoped he would be remembered for once he was out of office.