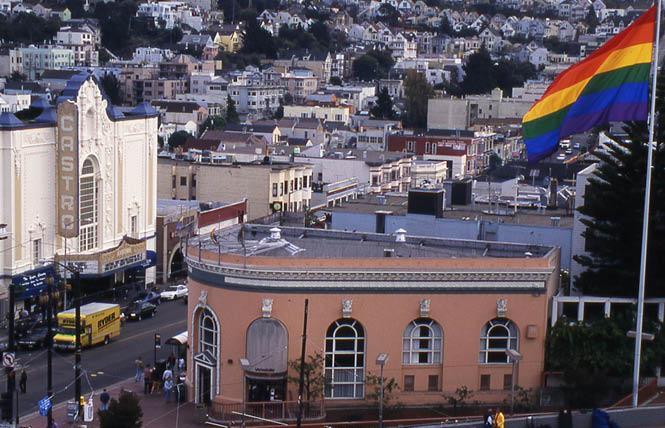 A Board of Supervisors panel Monday approved the formation of the Castro LGBTQ Cultural District. Photo: Rick Gerharter

A San Francisco Board of Supervisors panel threw its support Monday behind the creation of an LGBTQ cultural district in the city's Castro neighborhood.

The Board of Supervisors Rules Committee voted 3-0 June 17 to endorse establishing the third such district in the gayborhood following ones in the Tenderloin, focused primarily on the transgender community, and South of Market, created to preserve the area's leather culture. The full board is expected to approve the Castro LGBTQ Cultural District at its June 25 meeting, while Mayor London Breed will need to finalize it later this summer.

The Castro LGBTQ district has been talked about for years, with efforts to establish it formally launched in February last year. Gay District 8 Supervisor Rafael Mandelman introduced the ordinance creating it in April, and both the city's historic preservation and youth commissions endorsed it this spring.

"The Castro has been recognized worldwide for half a century," noted Mandelman at the hearing, as a haven for LGBT people. "It paved the way for gay culture, community, and politics in the 1970s, and it is where an international model for care of AIDS was created in the 1980s."

Formerly home to many Irish Catholic families and known as Eureka Valley, the neighborhood of Victorian homes and hilly side streets began attracting LGBT residents shortly after the cultural revolution of the 1960s. It was where the late gay supervisor Harvey Milk landed when he moved to town from the East Coast, setting up a camera store on Castro Street and launching his historic bids for public office.

The site of his Castro Camera shop at 525 Castro Street, where he also had his headquarters for his successful 1977 bid for supervisor, is a city landmark. Down the street at 401 Castro Street is another local landmark, the Twin Peaks Tavern, which was the first gay bar in the country to install clear glass windows so its patrons were visible.

As the status of the neighborhood in the heart of the city grew, so did concerns that rising rents and home prices were driving away the very LGBT residents that gave it its cultural cachet. Adding to the fears of seeing the Castro become an LGBT district in name only has been the shuttering of LGBT-owned businesses and the cancellation of street parties like Halloween and Pink Saturday during Pride weekend in June.

The Castro has also been grappling with other citywide concerns, like homelessness and income inequality, in recent years. Proponents of the cultural district believe it can play a part in finding solutions to the myriad issues Castro residents and merchants are confronting.

"People come to the Castro expecting to see this incredibly vibrant LGBT community. Oftentimes it is a little disappointing because there is not the vibrancy they are expecting," said Andrea Aiello, executive director of the Castro/Upper Market Community Benefit District.

David Hyman, who assists visitors to the area as a Castro ambassador with the CBD and also is involved with the SOMA leather district, told the committee that he has witnessed firsthand the "value of having a theme" and "a cultural sense" to a neighborhood.

"It makes this place attractive and interesting for people who visit it from aboard and locals as well," he said.

If it is approved by July, then the Castro district could seek funding in the next round of hotel tax money designated for such districts. Due to the passage of Proposition E last year, nearly 1.5% of the money from the 8% base hotel tax that the city already collects is dedicated to arts and cultural functions.

Jesse Oliver Sanford, who has lived in a queer co-op at the corner of 18th and Castro streets for 15 years, expressed concern for how the funding for the district would be spent. At the hearing, he asked that the money be directed toward a small grants program for LGBT artists and small business owners rather than paid staff for the district.

"We do not need $100,000 for an annual report and position. The funds should go to actual cultural producers," he said.

Nonetheless, Sanford expressed support for the district as a way to empower the voices of queer people of color, youth, and renters whose views are often not heard or overlooked by city officials and established neighborhood groups for homeowners and businesses.

"We have an opportunity here to change that," he said.

Aiello also voiced support for creating a grants program for local artists. Since its inception the CBD has brought in musicians and performers to activate Jane Warner Plaza, the public parklet at Castro, 17th, and Market streets. And this year the Castro Merchants business association raised enough sponsorships to be able to award small stipends to the artists that participated in the annual Windows for Harvey art show in the neighborhood timed to the Harvey Milk Day observance on May 22.

"The need for small little grants to support cultural initiatives would be really, really important and help the neighborhood a tremendous amount," she said. "It used to be, before San Francisco became so expensive and people have to work one job 80 hours a week or two or three jobs, lots of people had extra time and came into the Castro to be artists ... They could do that because they could afford to live in the neighborhood and had extra time on their hands."

Mandelman has pushed to see the Castro cultural district be approved by the end of June to coincide with it being Pride Month.

"My hope is the ordinance can be passed next week as an appropriate and auspicious beginning of our SF Pride," he said.