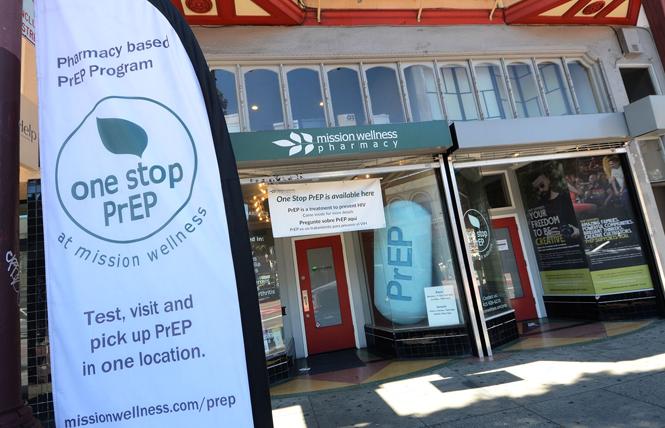 The June 11 recommendation received an "A" grade, meaning it is well supported by scientific evidence. The Affordable Care Act requires insurers to cover USPSTF-recommended prevention services with an "A" or "B" grade.

"The new recommendation for PrEP is enormously important news for the struggle against HIV," Dr. Robert Grant of UCSF, who led a major study showing that PrEP is highly effective for gay and bisexual men, told the Bay Area Reporter. "This grade A recommendation reflects the available evidence, which strongly supports the use of PrEP as a safe, effective method for HIV prevention."

Based on a review of medical studies, the USPSTF experts found "convincing evidence" that PrEP is of substantial benefit in decreasing the risk of HIV infection among people at high risk and "adequate evidence" that PrEP is associated with only small harms, including kidney and gastrointestinal side effects.

As described in the Journal of the American Medical Association, the recommendation says clinicians should offer PrEP to sexually active men who have sex with men and heterosexual women and men who have an HIV-positive sex partner, do not use condoms consistently, or have had a sexually transmitted disease within the past six months. It is also recommended for people who inject drugs who share needles or other injection equipment.

The task force recommends once-daily Truvada (tenofovir DF/emtricitabine) — currently the only PrEP regimen approved by the Food and Drug Administration — for all at-risk groups. But it also says that tenofovir DF alone, which is available as a cheap generic, is an option for heterosexual men and women and people who inject drugs, based on studies showing that it lowers HIV risk in these groups. No equivalent studies of gay and bi men have been done. The recommendation says little about intermittent PrEP — also known as PrEP 2-1-1 — taken on a fixed schedule before and after sex.

Many advocates applauded the new recommendation.

"While we know that access to PrEP involves much more than merely access to a daily pill, and PrEP uptake is lagging among many communities who need it, this positive recommendation from the USPSTF will provide a boost for the [Trump] administration's plan to reduce new HIV infections by 90 percent in the United States by 2030," said Carl Schmid, deputy executive director of the AIDS Institute.

Implications for access
Medical experts and advocates agree that the new recommendation has the potential to substantially expand access to PrEP. The mandate is expected to be fully implemented in 2021 — around the time generic versions of Truvada are likely to become available.

"The decision of the USPSTF to grant PrEP a grade A recommendation is an excellent, if long overdue, step to ensuring universal access to this vital public health tool," James Krellenstein of the PrEP4All Collaboration told the B.A.R. "Activists will now need to ensure that when this rule is implemented, all plans are not only charging zero cost sharing for access to the drug, but also to the vital clinical services that people on PrEP need to stay healthy."

According to CDC estimates, only around 10% of the more than 1.1 million people in the United States who are at substantial risk of acquiring HIV are using PrEP. This drops to just 1% of African Americans, the group with the highest rate of new infections. In California, the state Office of AIDS estimates that as many as 240,000 Californians could be eligible for PrEP, but only around 9,000 people were using it as of late 2016. In San Francisco, about half of eligible individuals are on PrEP, according to the city's latest HIV epidemiology report.

Many private insurers already cover Truvada PrEP — which is priced at around $1,600 per month — but many require cost sharing. Manufacturer Gilead Sciences offers a co-pay card that people with private insurance can use to cover their out-of-pocket costs, but some find this benefit inadequate. The USPSTF recommendation will eliminate this cost sharing. In addition, more state Medicaid programs are expected to cover PrEP. In effect, the recommendation could end up shifting the cost of Truvada from Gilead to private and public insurers — and ultimately to the premiums paid by customers.

The recommendation is unlikely to satisfy advocates who demand that Gilead lower the price of Truvada and want other companies to produce less expensive generic versions. As previously reported, Krellenstein's group discovered earlier this year that the CDC appears to hold patents on the use of Truvada for HIV prevention, but the government has not taken advantage of them to increase access to PrEP.

The cost of PrEP represents a substantial financial burden for both Medicaid programs and state and local public health departments that directly provide Truvada. California's Medicaid program spends about $50 million on PrEP, according to Kaiser Health News.

While a majority of individuals with access to the health care system can generally find a way to obtain Truvada now — especially in cities such as San Francisco that employ PrEP navigators to help them — the larger issue is people who aren't engaged in care. Beyond the cost barrier, expanding PrEP use among those who need it most will also require raising awareness and combatting stigma.

"PrEP has been proven to be a highly effective intervention in preventing new cases of HIV, and receiving an A grade is an important step toward increased access," San Francisco AIDS Foundation CEO Joe Hollendoner told the B.A.R. "We know, however, that access alone does not result in utilization, so we call on health care providers to educate their patients who are at risk for HIV acquisition — especially those who are people of color — about PrEP and how it can protect their sexual health."

But in some cases providers themselves can be the problem.

PrEP at the pharmacy
In other PrEP access news, the California Senate last month passed a bill that will allow pharmacists to provide PrEP and post-exposure prophylaxis (PEP) without a doctor's prescription. It also prohibits insurance companies from requiring prior authorization for PrEP coverage.

Senate Bill 159, coauthored by gay state Senator Scott Wiener (D-San Francisco) and gay Assemblyman Todd Gloria (D-San Diego), authorizes pharmacists to offer a month's worth of PrEP without a physician's authorization. Clients would then be referred to a medical provider for the recommended ongoing monitoring, including STD screening and kidney function tests. Pharmacists would also be able to offer a monthlong course of PEP, which must be started within 72 hours after exposure to HIV.

"By allowing pharmacists to furnish these revolutionary medications, we will help reduce HIV infection rates and create a stronger path toward ending new HIV infections entirely," Wiener said in a statement. "We have the tools to end new HIV infections, and we can get there in our lifetime."

Some have raised concerns about providing PrEP without doing testing on kidney function in advance, because the tenofovir in Truvada can potentially cause kidney impairment in susceptible individuals. But studies have shown that kidney problems are uncommon among people using Truvada for HIV prevention.

"One month is not going to be a problem," Grant told the B.A.R. "We're not seeing kidney problems very much at all in people seeking PrEP. These typically occur four to five months after starting and they're rare."

SB 159 passed by a wide 34-1 margin on May 21. It now moves to the Assembly. If approved there, the two chambers will agree on a compromise version and send the legislation to Governor Gavin Newsom, who is expected to sign it.

"The goal of the bill is to make PrEP accessible at a point when people are willing and able to start," said Courtney Mulhern-Pearson, senior director for policy and strategy at SFAF, which co-sponsored the bill. "We're looking at PrEP uptake and realizing we need to do more to increase access across the state. This is an innovative way to increase access to and awareness of PrEP and to make sure it's available to all who need it."