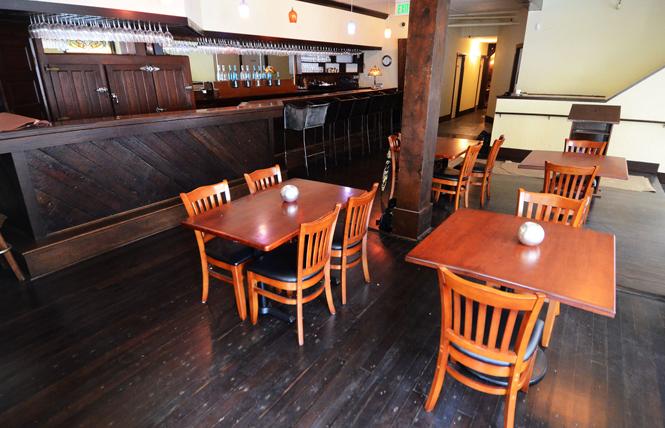 The interior of the former Paper Doll Restaurant as it looks today. Photo: Rick Gerharter

A restaurant space in San Francisco's North Beach neighborhood is on its way to becoming the city's fourth LGBT historic site. It is believed it would be the first landmark in the country to focus on an early queer eatery.

For decades, the property at 524 Union Street was home to several LGBT restaurants, most famously that of the Paper Doll. Opened in 1944, the Paper Doll is considered to be San Francisco's first restaurant and nightclub catering to the gay community.

The Board of Supervisors approved the local landmark for the site June 11, more than two years after the Smucha family that owns the building first proposed it be recognized for its historical significance to the LGBT community. The vote was 9-0 as Supervisor Gordon Mar had left the chambers and Aaron Peskin recused himself since he owns property within 500 feet.

The board needs to approve it a second time at its June 18 meeting, and San Francisco Mayor London Breed is expected to sign off on the landmark later this month. The family is looking into adding a historical marker or plaque to the building once the landmark designation becomes final.

"I am amazed that in San Francisco we are the only early LGBTQ-related landmark designation," Beverly Smucha told the Bay Area Reporter Tuesday.

The Smucha family was inspired to seek the landmark designation after reading about the property's storied past in an LGBT historic context statement adopted by city officials in 2015. The document had recommended that 524 Union Street be landmarked.

The building, rebuilt after the 1906 earthquake, has housed bars and restaurants since the late 1840s. The Paper Doll's first owner, Tom Arbulich, hired lesbian staff and offered a welcome watering hole to queer patrons.

"It afforded sexual minorities a place to live somewhat openly and love somewhat openly and a place relatively safe for these people at a time it was illegal to be themselves," said Shayne Watson, a lesbian and architectural historian and preservation planner who co-wrote the citywide LGBT study.

By the mid-1950s, gay men had claimed the space as their own, leading to a court fight over the suspension of its liquor license waged by then owner Dante Benedetti, a straight man. He lost his legal battle and later sold the bar; in the late 1960s and early 1970s the late B.A.R. founding publisher Bob Ross had two stints operating restaurants there.

By the 1980s, the restaurant space lost its gay affiliations and was home to a number of establishments that catered to mostly straight clientele. After a French restaurant shuttered in 2012, permit issues hampered seeing another eatery open in the space.

The Smucha family, which has owned the site since the late 1970s, hopes to lease it out to a restaurateur that will honor its history. They are also looking into seeking both state and federal listing of the property as an historic site.

The city's other two LGBT landmarks are the late gay supervisor Harvey Milk's residence and former Castro Camera shop at 573 Castro Street and the former Jose Theater/Names Project Building at 2362 Market Street, once home the AIDS Memorial Quilt. While the Women's Building at 3543 18th Street is also a city landmark, it was listed for its historical significance predating the modern LGBT rights movement. It did recently gain national historic site status due to its LGBT cultural significance.