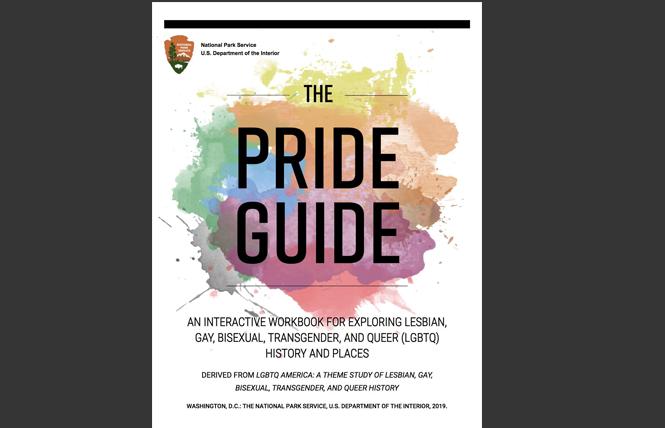 The 80-page guide is an interactive resource for exploring LGBTQ history and places in the United States. Working through the Pride Guide gives people an opportunity to learn new things, but it should also inspire them to socialize with others while listening to their thoughts and perspectives, according to a release from the Park Service.

In 2016, the Park Service published "LGBTQ America: A Theme Study of Lesbian, Gay, Bisexual, Transgender, and Queer History," which explored the legacy and history of LGBTQ people and places.

"This Pride Guide provides a brief summary of each chapter of the theme study along with discussion questions and activities," the Park Service stated in the release.

The event will help residents in District 10 have a larger presence in the San Francisco Pride parade, according to a Facebook post.

Momma's Boyz will be joined by their Kingdom drag king brothers, the Sisters of Perpetual Indulgence, and special performances by Ariel Bowser and Anya.

A $10 donation at the door gets attendees a raffle ticket for the chance to win some goodies and enjoy the show. Additional raffle tickets can be purchased. Organizers will also be auctioning off a magnum of Dolcetto Rose.

Bayview Pasta will be in the house serving up its lasagna paired with a glass of wine, with $2 from all lasagna and wine sales going in the pot.

Attendees are encouraged to come dressed in their best drag.

"It is not enough for us to send 'thoughts and prayers' after each of these incidents," Out & Equal CEO Erin Uritus said in a news release. "We need to recognize that this is a crisis that demands action."

She said that staff at the nonprofit talked about what the organization could do.

"We immediately knew that this violence is related to the social status of transgender women, and that this status is closely linked to the fact that transgender women are far more likely to be unemployed or underemployed," Uritus, who identifies as pansexual and queer, added.

According to Out & Equal, the body of Chynal Lindsey, 26, was found in a Dallas lake on Saturday, June 2. Muhlaysia Booker, 23, was found dead in Dallas on Saturday, May 25. Paris Cameron was shot and killed in Detroit May 25. Michelle "Tamika" Williams, 40, was fatally shot in Philadelphia Friday, May 24. Claire Legato, 21, succumbed to her injuries May 14; she had been shot a month earlier in Cleveland.

The scholarship is a "token" of Out & Equal's solidarity with women who face this threat, Uritus added.

"It is also our hope that by announcing this scholarship — and talking about this issue at the summit — we will be able to place this crisis, and the need for action, on the agenda of all of the Fortune 1,000 companies that will be present," she said.

The summit is scheduled for October 14-17 in Washington, D.C.

The scholarship application can be found at https://outandequal.org/transempowermentscholarship/.

Trans health program at Commonwealth Club
Tiffany Woods, a trans woman and longtime health advocate, will present "Transgender Health in the Age of Trump: An Attempted Erasure of Trans Americans" Monday, June 17, at 5:15 p.m. at the Commonwealth Club, 110 The Embarcadero in San Francisco.

Woods was recently elected northern California co-chair of the LGBT Caucus of the California Democratic Party. A former program manager at TransVision, Woods is now a trans health specialist for the state Department of Public Health, though her talk is independent of her day job.

Woods is expected to address the numerous things the Trump administration has done to negatively affect trans Americans, including the ban on trans service members serving in the military. The Department of Health and Human Services has created a Conscience and Religious Freedom Division, which is expected to offer greater protections for health care workers who do not wish to treat trans patients.

"Yet, trans Americans and their allies have fought back, defining their resiliency and ability to personally succeed at historic levels," a program description noted.

Alameda fair to hold Pride day
The Alameda County Fair will have its first Out at the Fair Pride Day Saturday, June 22.

The fair is held at the Alameda County Fairgrounds in Pleasanton.

"The Alameda County Fair prides itself on community and inclusiveness," Angel Moore, vice president of business development, said in a news release. "We are excited to introduce these new festivals to recognize the importance that diversity plays in all communities throughout the Bay Area."

The Alameda fair features horse racing, a carnival midway, and free concerts from 8 to 9:15 p.m. nightly with fireworks (except July 4). June 28 will feature a fireworks spectacular set to music at 9:45.

BAYMEC fondation Pride Month program
In celebration of the 50th anniversary of the Stonewall riots, the BAYMEC Community Foundation will present an event to recognize Wiggsy Sivertsen, one of the South Bay's leading figures in the LGBTQ civil rights movement, Monday, June 24, from 5:30 to 8 p.m. at Cafe Stritch, 374 S. First Street, in downtown San Jose.

The BAYMEC Community Foundation is the 501(c)3 arm of the Bay Area Municipal Elections Committee, which Sivertsen helped co-found.

Ken Yeager, a gay man and former Santa Clara County supervisor, is now the executive director of the foundation. In a news release, he said that "An Evening with Wiggsy and Pals" will be fun and give people a chance to hear Sivertsen's story and share their own.

"You won't want to miss this chance to hear her stories told with typical candor and humor," he said. "We all know Wiggsy is not someone who holds back."

The event is co-sponsored by Silicon Valley Pride, the Rainbow Chamber of Commerce, and the Billy DeFrank LGBTQ Community Center.

Tickets are $100 and benefit the BAYMEC foundation. For more information, visit https://www.baymecfoundation.org/.

Merola is widely regarded as the foremost opera training program for aspiring singers, coach accompanists, and stage directors. It is financially independent but has a close association with San Francisco Opera, according to its website.

At the upcoming show, program participants will perform selections from the new opera, "If I Were You."

According to a news release, the newly commissioned opera is a contemporary story of identity with echoes of classic literature, from Faust to Jekyll and Hyde. Composer Jake Heggie and librettist Gene Scheer envision a work in which many of Merola's young singers have the opportunity to be the lead as Fabian's soul and music move from one character to the next.

General admission tickets start at $35, VIP tickets start at $60 and include a special meet and greet with the performers. All tickets include complimentary refreshments. The evening will benefit the center's programs and services. For tickets and more information, visit https://bit.ly/2ZcjeW6. 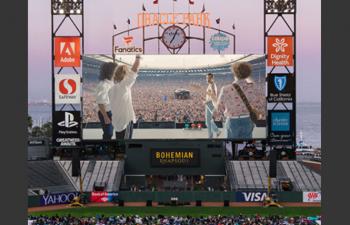 "We are very excited to host the inaugural public movie night on our new state-of-the-art scoreboard at Oracle Park," Stephen Revetria, president of Giants Enterprises, said in a news release. "The Bay Area has a very passionate cinematic community that we look forward to bringing together now and in the future."

Giants Enterprises is also teaming up with the San Francisco AIDS Foundation to donate a portion of every ticket sold.

"We are excited and grateful to partner with the Giants on this fun and festive event," Joe Hollendoner, SFAF CEO, stated in the release.

The evening's program will include a pre-show performance by The Killer Queens, the world's only — and San Francisco's own — all-female Queen tribute band. Following the movie, guests will enjoy a brief fireworks show as the credits roll.

Guests will have the opportunity to sit on the field to enjoy the Academy Award-winning film that stars Rami Malek, who won an Oscar, as Mercury.

Giants Enterprises is the entrepreneurial arm of the Giants baseball team.

Tickets are $15 general admission and are now on sale at http://www.sfgiants.com/movienight.

Muni art deadline approaching
San Francisco Beautiful has announced that the deadline is fast approaching for this year's open call for Muni art submissions. People have until Friday, June 28, at 5 p.m. to submit a piece for consideration.

This year's theme is "Hidden Gems in San Francisco."

For more information, and an application, go to https://sfbeautiful.org/muniart-call/.

The Oakland City Council approved the library's request in May.

Books, audiobooks, CDs, DVDs, and items reserved through LINK+ will no longer incur overdue fines. Tools checked out from the Oakland Tool Lending Library will still have overdue fines, though they will be significantly reduced.

Patrons will still be billed a replacement fee for items not returned 30 days past the due date. The fee will be excused when the item is returned in good condition.

"Our library exists because of community support. Our materials are meant to be used, and this is a more effective way of ensuring their availability to everyone," Jamie Turbak, director of library services, said in a news release.

In other news, the Oakland Public Library increased its hours for the first time since 2004 earlier this spring, thanks to funding through voter-approved Measure DD.