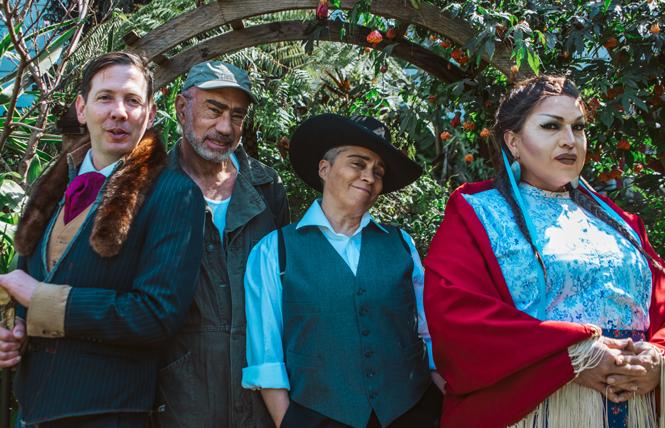 Local history buffs are invited to take a walk through the South of Market neighborhood's queer past over two weekends this month.

The June 8-9 and 15-16 tours, titled "Out of Site: SOMA," are the second in a series of such walking tours brought to the city by Seth Eisen through his company Eye Zen Presents. The concept of the tours is simple: participants will be led on a guided tour of the South of Market neighborhood, which has long been a stronghold of the leather community. Along the way, the audience will be introduced to actors and performance artists who will tell the stories of the physical places that the audience is visiting and some of the people involved.

Attendees will learn about Native American Two Spirit culture, lesbian auto mechanics, dock workers, and drag queens as the history of SOMA comes back to life. The audience will also be taken back to the early days of the Folsom Street Fair.

Last year, Eisen took audiences on a similar historical walking tour of North Beach, which was an early gathering place for the city's LGBT community in the days before the establishment of the Castro.

"From the get-go I was making work primarily about queer history," Eisen told the Bay Area Reporter. "That actually happened while I was with Keith. I did a show with Keith called 'How To Die,' where I played the ghost of disco, and I realized that theater and queer history coming together was where my passion was. Ever since I've been making work that was based in artistic and archival research based on queer history, mostly histories that have been lost, forgotten or erased."

The seed for the neighborhood walking tour was planted in 2016, when Eisen read an LGBTQ Historic Context Statement that was done for the National Park Service during the Obama administration and explores the way LGBTQ histories have shaped the fabric of San Francisco's culture.

"That's where this project began," said Eisen. "I realized that there's so much more history that I haven't dug into — it would be amazing to do a project where the sites themselves were part of the work, meaning an immersive theatrical project that's not in a theater but happens on the street where we learn about the location or the site of queer history where it happened."

Eisen gave as an example the possibility of visiting Harvey Milk's old camera store at 575 Castro Street — now the Human Rights Campaign Action Center and Store — with Milk present via an actor's interpretation. (Milk, a San Francisco supervisor, and then-mayor George Moscone were assassinated in 1978 by disgruntled ex-supervisor Dan White.)

"That doesn't happen in this show," Eisen said of the upcoming SOMA tours. "That's just an example of something people could connect to. There's a synergy that happens when those two things come together, when you actually see the history in the place or nearby where they happened. It helps to put together a picture."

Gomez, a lesbian comedian, said the show in some ways is a familiar story to her.

"For me to play a character at the Bay Brick (now the Cat Club) — where I used to perform and where I used to pick up ladies! — is a personal highlight of the tour," she said in a statement to the B.A.R. "I also portray Kathleen Connell, who started the Folsom Street Fair, and I remember her well because I was one of the first emcees at the event in 1984. Because I was in San Francisco during the onset of the AIDS crisis, I feel like I have a very personal stake in Out of Site. Every day we do this show my old friends are with us."

Connell, who co-founded the leather and kink extravaganza with Michael Valerio, wrote in a Facebook message that the two were community economic development displacement advocates in the 1970s and 1980s.

"This was a time when the city was aggressively characterizing the South of Market area as blighted, in order to drive out low-income elderly residents, artists, Filipino immigrant families and the LGBT community," she added. "Their objective was to make way for the growth of downtown across Market Street, all the way to Brannan.

"As LGBT people, we were also part of the community being devastated by AIDS. Leather community leaders told us, and we could see, that they were being ignored and underserved in the midst of the crisis," she wrote. "The city itself was in mourning."

Their first response, Connell wrote, was rebranding the area as SOMA.

"Then in 1984 we produced an inclusive, large and festive first Folsom Street Fair, which we dubbed 'Megahood,'" Connell wrote. "Marga Gomez volunteered her time as the emcee on the main stage. Thirty thousand people attended the first fair, and 'Folsom' was born. We gave away all of our proceeds, a tradition that has continued to this day, resulting in many, many millions donated to nonprofits. The leather community participated and became more visible, even while many of our 400 community volunteers were sick or dying."

She encouraged people to take the "Out of Site: SOMA" tour.

"We are part of a long, largely unknown, and vibrant history of diverse rebel organizers in SOMA, which Out of Site is bringing back to life with a walking theater piece," she wrote. "The story of SOMA's unexpected history is fascinating. I recommend this event to everyone."

Brothers is playing an artist who was involved with the leather community.

"I was drawn to join the cast of Out of Site because I wanted to learn more about our gay history," Brothers, who is gay, wrote in an emailed statement. "One of the roles I play is that of Chuck Arnett, a ballet dancer in Broadway musicals as well as a visual artist, who moved to SF to be part of SOMA's leather community. His most famous artwork was a mural painted on the walls of the Tool Box, a gay bar he worked at in the 1960s. His example of self-reinvention is very inspiring. By the way, I wear my own Mr. S stuff in the show."

Eisen pointed to projects such as the Rainbow Honor Walk, in which plaques are embedded in Castro district sidewalks to commemorate key LGBT historical figures.

"What's different about what we're doing is that we're actually bringing those histories to life. Our North Beach tour went back to the Barbary Coast," Eisen said, referring to a tour he did last year. "The Transamerica tower was the site of a place called the Monkey Block, where dozens of artists hung out and had studios in this building. We went all the way back to the Native American period and then to the 19th century, and then forward to the early 1900s, when the Black Cat was one of many bars in North Beach. We did a lit crawl because there were many poets that we brought back to life, and lesbian bars. It was quite a scene that we recreated."

This process will be repeated for "Out of Site: SOMA." A tour guide will lead attendees to various historical sites, where the actors will play actual people who made the neighborhood what it was. Unlike the North Beach show, which featured entertainment spots and places where people congregated, the SOMA show will focus on the contested land of Native people, organized labor, and the leather community. Nineteenth century transgender history will be included. The audience will "meet" a trans man named Jack Garland, who wrote for the San Francisco Examiner and other local papers, fought in the Spanish American War, and helped homeless people.

"We fast forward to the 20th century and look at some of the lesbian bars, the histories of gay bars in South of Market, and how the leather community was formed," said Eisen. "We go into some of the first leather bars such as the Tool Box and a bar called the Ambush and we feature some of the very important people of that era. It's a fun way to get educated."

The tour will take about two hours, and includes rest stops.

"It's a performance-driven, immersive, sight-responsive queer history walking tour that literally brings queer history onto your lap," said Eisen. "It places you right into the center of queer history as opposed to watching it from a distance. It's exciting, it involves the audience — you get to be part of the scene as a participant helping to enact the histories. It's a very unique experience. A lot of people think they know South of Market, you'll never see it the same."

"Out of Site: SOMA" takes place June 8-9, 15-16; Saturdays at noon and 3 p.m., Sundays at 1. People should meet at Howard Langton Community Garden, 10 Langton Street. The show finishes at Ringold Alley, 1 Ringold Street. Tickets are $10-$45 and available at https://www.eyezen.org/out-of-site-soma.