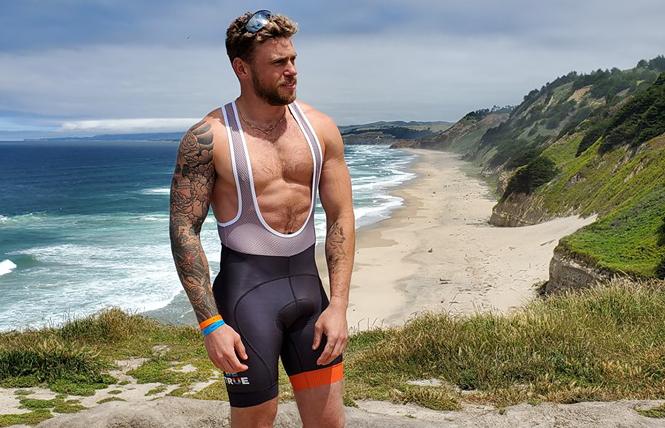 The local LGBT sports world got Pride Month off to a great start, with the Oakland A's celebrating their Pride Night June 1 with a game against the Houston Astros and more than 2,000 riders setting out the next day for the annual AIDS Life/Cycle trek to Los Angeles, where they will arrive in time for that city's Pride celebration this weekend.

Alas, the A's lost their game to the Astros, 5-1, but AIDS/LifeCycle organizers reported their riders are raising $16.7 million for AIDS and HIV-related services provided by the San Francisco AIDS Foundation and the Los Angeles LGBT Center. Olympic skier Gus Kenworthy has joined the event this year and was credited at the start of the week with raising nearly a quarter of a million dollars.

There's a lot more to come this month — especially runners! — in our queerish corner of sports. Here's a quick look at some of the events.

Outsports anniversary
Outsports.com will celebrate the 20th anniversary of its founding with a gathering of supporters in Los Angeles this weekend. Outsports, founded by Jim Buzinski and Cyd Zeigler as a site for gay fans of sports to be able to meet up and talk about the teams and games they love, grew during the first dawn of social media into a place for athletes themselves to connect and find the courage to come out. More details about the event are available at http://www.outsportspride.com.

Gay basketball finals
The 2019 spring season for the San Francisco Gay Basketball League comes to a close with tournament action at the Eureka Valley Recreation Center, 100 Collingwood Street in San Francisco. The semifinal games will be at 7 and 8 p.m. Wednesday, June 5. The championship game is at 8 p.m., Wednesday, June 12. Casual open-gym games will be held from 5 to 8 p.m., June 9 and 23; $5 donation per player requested. For more information, visit http://www.sfgba.com.

SF Giants Pride Night
The San Francisco Giants will hold their annual LGBTQ Night Wednesday, June 12, with a 6:45 p.m. game against the San Diego Padres. Special-ticket holders will receive a wearable SF rainbow flag and be treated to a pre-game party. Beneficiaries of the event include the Federation of Gay Games, Team SF, the SF Gay/Lesbian Freedom Band, San Francisco Pride, and Horizons Foundation.

The San Francisco Lesbian/Gay Freedom Band and drag queen Juanita MORE! will perform during the pre-game party. The national anthem will be performed by Kippy Marks, who has worked previously with such groups as the Sisters of Perpetual Indulgence and the Imperial Council of San Francisco.

I've been asked to announce, "Play ball!" before the first pitch. Look, Ma — I finally made it to the majors!

Track and field events
The 12th annual Pride Meet hosted by San Francisco Track and Field Club will be held Saturday, June 22, at Chabot College in Hayward. Online registration for the all-day event is available at http://www.pridemeet.org.

This year, the Pride Meet will coincide with the International Front Runners annual general meeting, to be held June 21-23 in San Francisco. Details on the meeting and affiliated events are available on the Pride Meet website.

The 40th annual Pride Run will be hosted by San Francisco FrontRunners Saturday, June 29, in Golden Gate Park. Registration is available at http://www.sffr.org. This year's run beneficiary is Gender Spectrum (www.genderspectrum.org), which works to create a gender-inclusive environment for children and youth.

Ban on Semenya suspended
The supreme court of Switzerland said Monday it is suspending international track's ban on lesbian South African runner Caster Semenya and other women athletes with differences in sexual development, or DSD. The court order opens the door for the 800-meter specialist to resume track competition and gives the International Association of Athletics Federations until June 25 to show why its ban should be reinstated.

"I am thankful to the Swiss judges for this decision," Semenya said. "I hope that following my appeal, I will once again be able to run free."

BBC reported the Federal Supreme Court of Switzerland said it had "super-provisionally instructed the IAAF to suspend the application of the 'eligibility regulations for the female classification for athletes with differences of sex development' with respect to the claimant, until the decision on the request for issuance of provisional measures. At present, it is not known when the Swiss Federal Supreme Courts will issue an interlocutory order concerning these provisional measures."

The IAAF had no immediate response.

Said Dorothee Schramm, Semenya's counsel in Switzerland, "This is an important case that will have fundamental implications for the human rights of female athletes."

The Court of Arbitration for Sport last month ruled that IAAF's requirement that DSD runners competing in distances from 400 meters to a mile take hormone suppressants to reduce their naturally occurring testosterone levels was discriminatory but necessary to preserve the "integrity" of women's sports. (See May 9 Jock Talk, "Semenya decision is elitist crap.")

The World Medical Association denounced the ban, saying the science behind it was questionable and no doctors should comply with it because of the ethical conflicts it created. And the CAS itself raised questions about which distances were selected for the ban, which seemed arbitrarily focused on distances dominated by DSD runners of color from the Southern Hemisphere and not tied to any strong links between testosterone levels and performance outcomes.

When Semenya filed her current appeal in the Swiss courts, she said, "I am a woman and I am a world-class athlete. The IAAF will not drug me or stop me from being who I am."